Your Donation to a Shavee Matters, and Here’s Why

Someone you know is shaving their head for childhood cancer research and is asking YOU for a donation. But why should you give? 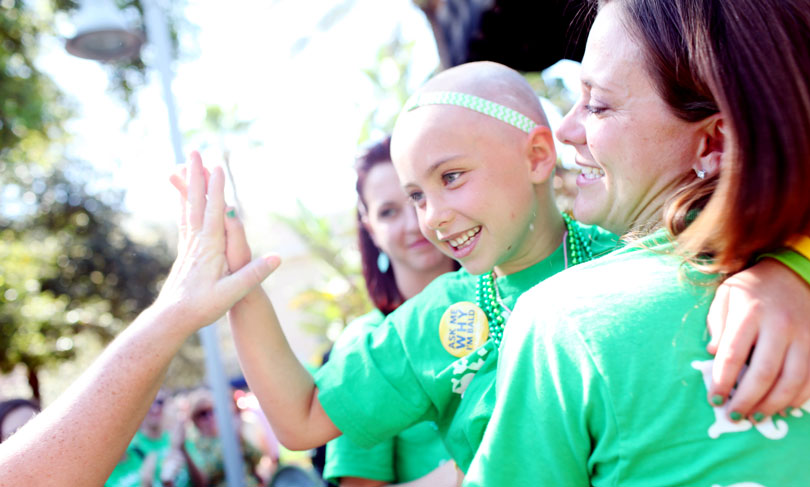 My Kids Don’t Have Cancer but I Shave My Head, and Here’s Why

Chris Colton has no personal tie to childhood cancer. Yet for the last seven years, he and his son, Liam, have shaved their heads with St. Baldrick’s. Read Chris’ explanation of why funding childhood cancer research is so important, even if it doesn’t affect you directly. 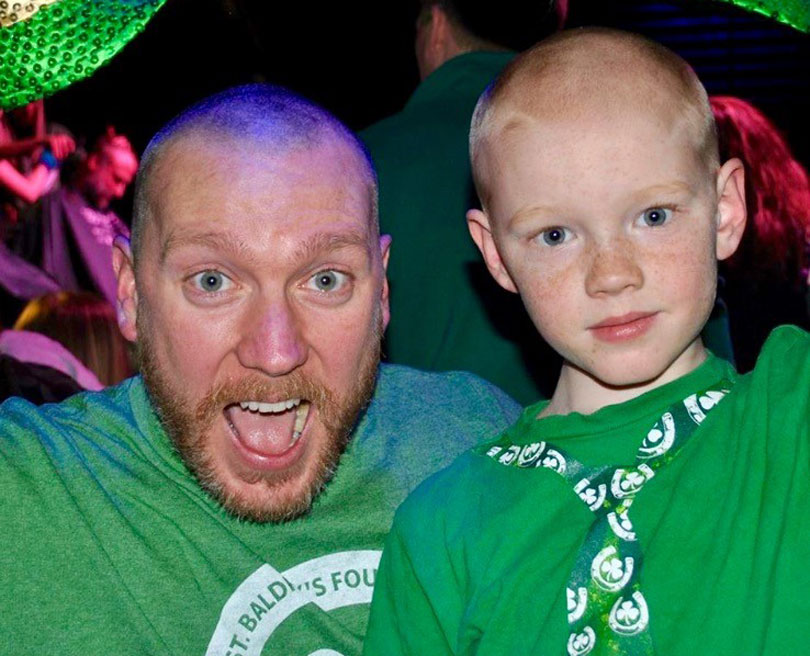 One of my favorite days of the year is “St. Baldrick’s Day” — a day of bald heads, temporary tattoos of green shamrocks and fundraising for childhood cancer research.

This year marks the seventh year that my 8-year-old son, Liam, and I have shaved our heads at our local head-shaving event in Libertyville, Illinois.

shavee
Why I Give The money raised goes into grants that fund every stage of the research process at over 300 institutions in the U.S. and around the world. These grants are an investment in the lives of kids with cancer, and each grant requires a substantial financial investment, too.

Josh Finishes Treatment and Shaves His Head for Kids With Cancer

Josh, a St. Baldrick’s Honored Kid from Weston, Florida, was diagnosed with leukemia in 2010. The 11-year-old has been off treatment for about seven months now and shaved his head for childhood cancer research at a St. Baldrick’s event at Mickey Byrnes Pub in Hollywood, Florida last month. Help Josh reach his goal! Donate on his shavee℠ page. 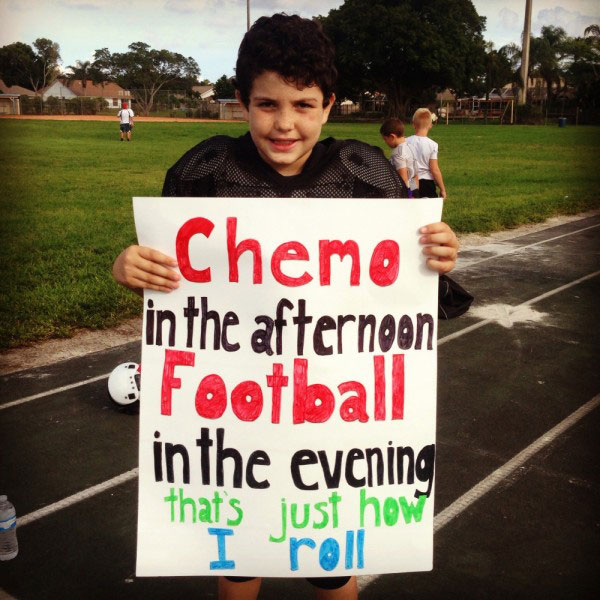 Josh loves playing football and was able to return to the sport just a year after being diagnosed with acute lymphoblastic leukemia.

Almost four years ago, I was in second grade.  I loved playing football, but I was really tired.  I couldn’t play as well as I normally could.

acute lymphoblastic leukemia leukemia shavee
Why I Give

Couple’s Gift Leaves Legacy of Hope for Children With Cancer

You can give hope to children with cancer. Get involved.

Dr. Todd Alonzo was an esteemed statistician with the Children’s Oncology Group (COG) in 2003 when the first California St. Baldrick’s events were held. He was well respected by his colleagues in the childhood cancer research arena for his expertise and knowledge.

But what would inspire this distinguished researcher to shave half his head in Southern California, fly half-shorn to Sacramento, and shave the other half there? 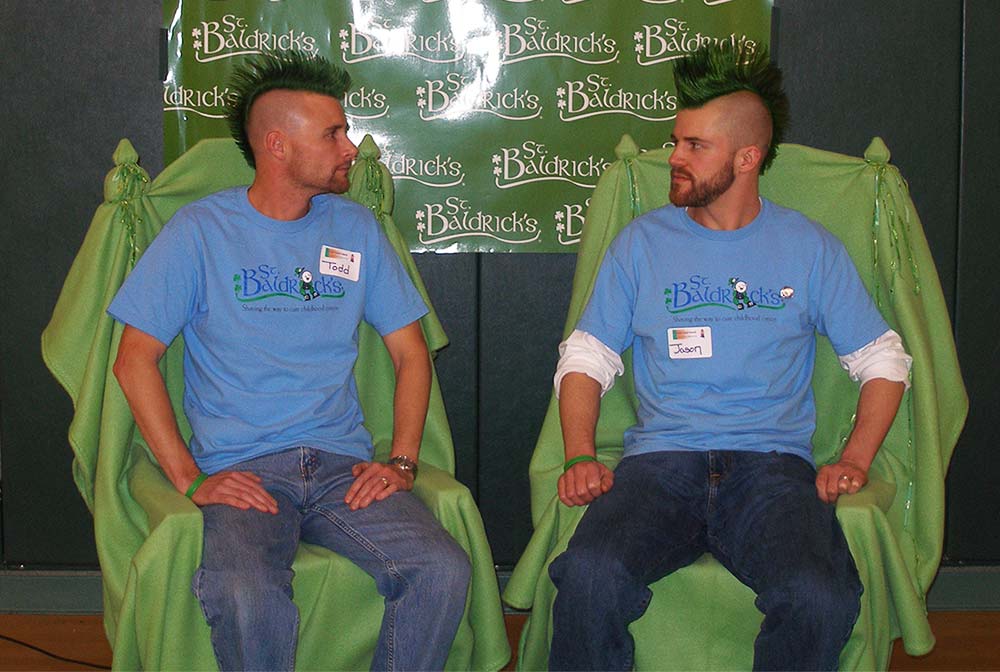 A brother who dyed his hair green! And a challenge to see who could raise more money for an incredible cause.

An Open Letter to Lexus: Thank You for Providing the Fuel to Fight Childhood Cancer

Kris, a St. Baldrick’s volunteer and shavee℠, was one of 10 winners of the Lexus Bold IS video contest. She donated her prize to St. Baldrick’s to help fund childhood cancer research. You can help, too. Kris, second from right, and her family in front of the St. Baldrick’s-themed Lexus Bold IS.

To our friends at Lexus,

As the mother of a childhood cancer survivor and a participant in your Lexus Bold IS video contest, I would like to take this moment to thank you for joining with the St. Baldrick’s Foundation and offering this unique opportunity for its shavees to take a bold new step in their efforts to promote awareness for childhood cancer and to secure funding for a cure.

However, before I do so, I would like to share with you some of the reasons why your collaboration with St. Baldrick’s has helped foster hope in the hearts of those touched by childhood cancer. Three-time shavee Michael Rue sits in the barber’s chair for St. Baldrick’s. Michael passed away in 2012, but his family carries on his memory by donating to Michael’s favorite childhood cancer foundation.

“A single act does make a difference…it creates a ripple effect that can be felt many miles and people away.” – Lee J. Colan

When Michael Rue first shaved his head in 2009 to support a friend’s daughter battling leukemia, he had no idea of the ripple effect it would create for his family and friends. Michael passed away suddenly in November 2012, and the following March, his mom attended her first St. Baldrick’s event at Meehan’s Public House in Sandy Springs, Georgia.

This past weekend, I watched two men get their heads shaved in memory of their friend and my son, Michael. They looked supremely happy. I know without a doubt Michael was there in spirit sporting a big grin on his face, just as he did each time he was a shavee.

I regret never attending any of the events when Michael got his head shaved. He did it three times — in fact I kind of dreaded it. I didn’t think Mike looked good bald, and I told him so! But he would always assure me his hair would grow back again. He smiles back at me in pictures I have of him in the barber’s chair and he looks so happy.

Frank with the Iowa Chrome Domes

Shavee, Team Captain, VEO, and Knight of the Bald Table Frank Bigley shares why he supports the St. Baldrick’s Foundation.

As the person who introduced St. Baldrick’s to the state of Iowa in 2006, I felt it was important to lead by example and be a shavee. I was familiar with St Baldrick’s from my New York days and knew that the generous people of Iowa would be great supporters once they became familiar with the history, economics and mission of St Baldrick’s.

My motivation at that point was supporting the great things St. Baldrick’s was doing to help children stricken unfairly by the ravages of cancer. A couple of years later it became personal when my nephew, Chris, was diagnosed with medulloblastoma.

medulloblastoma volunteer event organizer
Why I Give

Max and Ty: So alike, with one big difference Both love rockin’ crazy hair styles
and super heroes who take down the bad guys.

brain tumor
Why I Give

Giving Thanks: Why This Year Is Different Like most families, we reflect on giving thanks more at this time of year than any other, but these past two Thanksgivings have been different. As soon as our son Max was diagnosed with childhood cancer, things were different.

We immediately gave thanks to our incredible neurosurgeon who saved Max’s life and to the PICU doctors and nurses for their tremendous care and humanity. We gave thanks for having the opportunity to take Max home when the baby girl in the room next to us would not ever return home in her parents’ arms. When cancer struck our family, we found ourselves giving thanks, and giving back, more than ever before.