A Sibling Ally in the Fight Against Childhood Cancer

As the oldest of three siblings, Nina has always been protective of her two brothers. But when she found out her youngest brother, William, had childhood cancer, everything changed. Read Nina’s story of how her family came together to conquer childhood cancer. 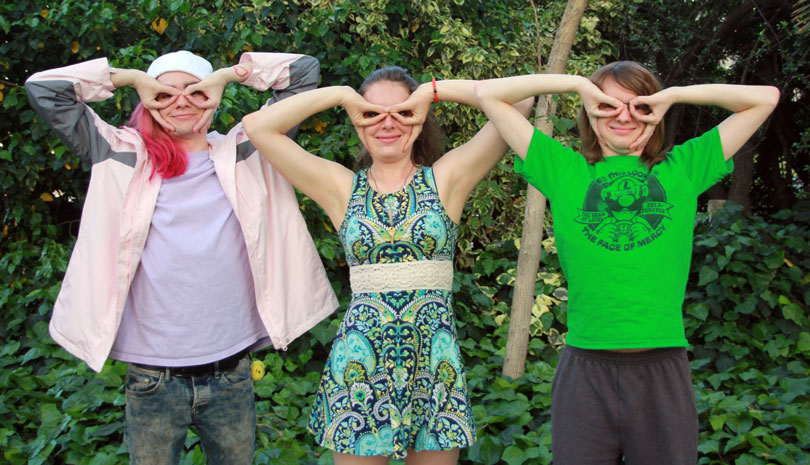 The Doyle siblings (left to right): Thomas, Nina, and William.

I will never forget one day in September 2002. It was the day my youngest sibling, William, was diagnosed with pleuropulmonary blastoma (PPB), a rare form of lung cancer.

The words “your brother has cancer” still ring in my ears to this day.

Why Wario Shaved at the 46 Mommas Shave for the Brave

St. Baldrick’s volunteers show their support for kids with cancer in fun ways! You can, too. Get involved.

Kris and her son Will dressed up as video game characters Wario and Waluigi.

Why dress up as Wario when I shaved with my fellow 46 Mommas?

Although not many people asked me outright, I could see the question in their eyes. I’m sure they probably thought I was a video game fanatic.

The truth is, I don’t play video games all that well. But my son does. An Open Letter to Lexus: Thank You for Providing the Fuel to Fight Childhood Cancer

Kris, a St. Baldrick’s volunteer and shavee℠, was one of 10 winners of the Lexus Bold IS video contest. She donated her prize to St. Baldrick’s to help fund childhood cancer research. You can help, too. Kris, second from right, and her family in front of the St. Baldrick’s-themed Lexus Bold IS.

To our friends at Lexus,

As the mother of a childhood cancer survivor and a participant in your Lexus Bold IS video contest, I would like to take this moment to thank you for joining with the St. Baldrick’s Foundation and offering this unique opportunity for its shavees to take a bold new step in their efforts to promote awareness for childhood cancer and to secure funding for a cure.

However, before I do so, I would like to share with you some of the reasons why your collaboration with St. Baldrick’s has helped foster hope in the hearts of those touched by childhood cancer.

Even Just for Today, Please, Think About Childhood Cancer When you hear me talk about childhood cancer, I am usually speaking about my son, Will. He fought the disease not just once, but twice. And by some miracle, he survived both times.

He stands before the world as a survivor, a tangible link to a terrible disease. There are many like him — boys and girls blessed with the ability to walk out of the hospital and away from the monster that is childhood cancer. They are living, breathing proof that some kids make it through the fight, and we cling to their stories of survival to inspire us to fight cancer.

Why I Still Live in the Childhood Cancer World

A parent of a childhood cancer survivor shares why she stays involved with St. Baldrick’s. Join Kris and shave your head to cure childhood cancer.

I have frequently been asked over the past couple of years — in a variety of creative ways — why I choose to still live in the cancer world, even though my son has remained cancer free for nearly 11 years. Some ask this with genuine curiosity, while others ask it with great concern.

And no matter which way the question is posed, I am left with the general understanding that at some point in the past 11 years, I am expected to have simply been grateful that my son’s life was spared, quietly walked away from the cancer world, and focused on going back to a life that should be far less distressing and depressing. As part of the St. Baldrick’s summer grants, Cincinatti Children’s Hospital Medical Center received $734,917 to support the efforts of a physician-researcher and one consortium working to cure childhood cancer.

Benjamin Mizukawa, M.D., received a three-year, $330,000 St. Baldrick’s Scholar award to support his work focused on acute myeloid leukemia (AML). Although most leukemia cells are readily killed by chemotherapy, if the leukemia stem cell is not killed in treatment, chances of survival are very low.

At the Water’s Edge: A Mother’s Plea

I took my boys camping at this beach we love so much. We have been taking the kids there since they were babies.

We took our son Will there a lot when he was going through cancer treatment. He couldn’t go in the water because we couldn’t risk infection, but I used to carry him on the beach and dream of the day he would be able to dance in the water.

When it finally did happen, I cried; we were so lucky.

While I was at the beach this time, 10 years later, I watched my son walk up and down the beach taking pictures and looking for shells. And I smiled. But at the same time, my heart hurt because I remembered a picture posted last spring — exactly a year ago — of a little boy named Ryan. Ten years ago, just after my fourth birthday, I was diagnosed with a childhood cancer called pleuropulmonary blastoma, or PPB. I had to have surgery to remove tumors from my lungs followed by months of chemotherapy to make sure it stayed away.

Luckily, for me, the treatment worked. But for many, treatment doesn’t work and they don’t survive. In fact, several of my friends and roommates from the hospital died while I was being treated.