Today would have been Superman Sam’s 9th birthday if childhood cancer hadn’t taken his life last December. Today, give $9 for Sam’s birthday to the 36 Rabbis, which was founded by Sam’s mom and a friend, and have your gift matched. Sam’s mom reflects on his birthday, the reality of losing a child to cancer, and the opportunity to reach $1 million raised for St. Baldrick’s.

Superman Sam would have been 9 years old today.

I’ve always been a really voracious reader, and as I reminded my 9th graders the other day, the pickings were far slimmer in the kids’ and young adults’ department of bookstores when I was younger. So I was always scanning bookshelves for things that looked interesting to me.

I remember being young, maybe 9 or 10, when I discovered a slim volume on the shelf at my aunt and uncle’s house. It was short, which didn’t bode well for me, since I tended at that point to pick books by their length. But there was something compelling about the cover. Alex: The Life of a Child, it was called, and there was a beautiful little girl on the front — her picture slightly fuzzy and black and white. I remember reading it cover to cover, and crying big blotchy tears. And then I remember reading it over and over again.

Alex (Alexandra) Deford was the child of Frank Deford, the sports writer and reporter. She was born with cystic fibrosis, a disease that has a better prognosis today than when she lived. Alex lived with CF for 8 years and died shortly after her 8th birthday. I remember researching the Cystic Fibrosis Foundation, and even setting up some kind of run/walk event to benefit the CFF through my Sunday School.

Just a week or so ago, I heard Mr. Deford on NPR. He’s a regular contributor, and he was giving a tongue-in-cheek rant about the late start time of World Series games. I giggled when he suggested that these late start times would discourage young fans of baseball, and that perhaps they would then turn to other things, like mixed martial arts.

After hearing this piece on the radio, I went online and found a used copy of his book about his daughter. (My copy seems to have disappeared.) It arrived a few days later, and it looked exactly like the well-worn copy that I read over and over all those years ago. I reread the whole book in one sitting. 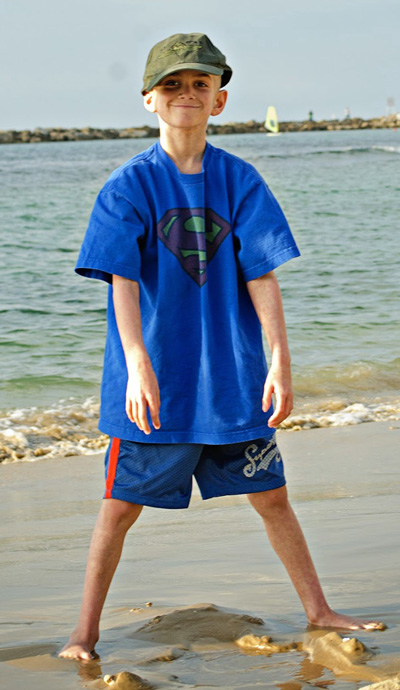 Superman Sam at the beach

The book had stayed with me. So many details about Alex’s life were familiar to me, the words totally present in my memory. It was like reading something I had only read yesterday — I had read the book so many times. In some ways, it was a weird foreshadowing of what would happen to us so many years later.

But I realized something as I sobbed my way through the book, and let me tell you, I sobbed reading nearly every page.

When I was a child, I was horrified at the idea of a child dying. I couldn’t imagine it; I couldn’t envision putting myself into her shoes. I couldn’t even imagine her friends, the ones that wrote such beautiful pieces about the love that they had for their young companion. And so I read it over and over again.

But what I realized was how I had, perhaps, simply glossed over her parents. What it must have felt like to be the parents of this child who was dying almost from the moment she began living. To read it now — oh my. (And so much has changed, of course. Alex’s parents were not allowed to sleep in the hospital with her! Plus they were always looking for flashbulbs…)

When Alex was first diagnosed with CF, the doctor who told Carol and Frank Deford said this to them:

“‘I know you don’t know me,’ he began, ‘but this may be of some consolation. My wife and I lost a child once too. And she gave us a great deal of love and joy before she died, and that made it much harder for us. But the point is: We survived. We went on. You see — I’m here. And you’ll go on too. It’ll be horrible. But you will overcome this.’”

Frank Deford followed that with:

“We thanked the doctor for his words, but, at the moment, I don’t think they registered. It was only with time that I came to understand them, and appreciate them.”

And Frank Deford was on the radio the other day, talking about baseball. 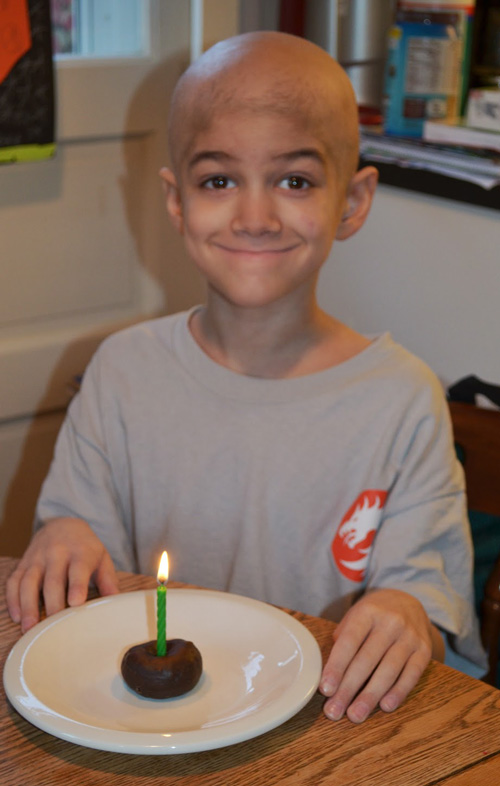 Superman Sam on his 8th birthday.

He loves his girl as much as I love my boy. I bet he woke up that morning and the ache for his Alex was still there. How could it not be? And then he got up and recorded that lighthearted piece for NPR.

There’s a certain guilt when we do things that are ordinary and everyday. And there’s an even more overwhelming guilt when we do something special or fun or celebratory. How dare we? How can our lives just…go on…when he isn’t here? How can we find light and beauty and yes, even happiness, when he isn’t here to be with us, to see the light and beauty and to be happy? And yet we do…

So much is on tap for our family in the next few weeks. A major event: our son David’s Bar Mitzvah. I almost typed “simcha” — the Hebrew word for “happy occasion.” Is it a simcha? Yes. Will we be happy? Oh, I hope so. David has worked hard, and he deserves to be celebrated in this moment in which he is called to the Torah.

And Sammy will always be there. 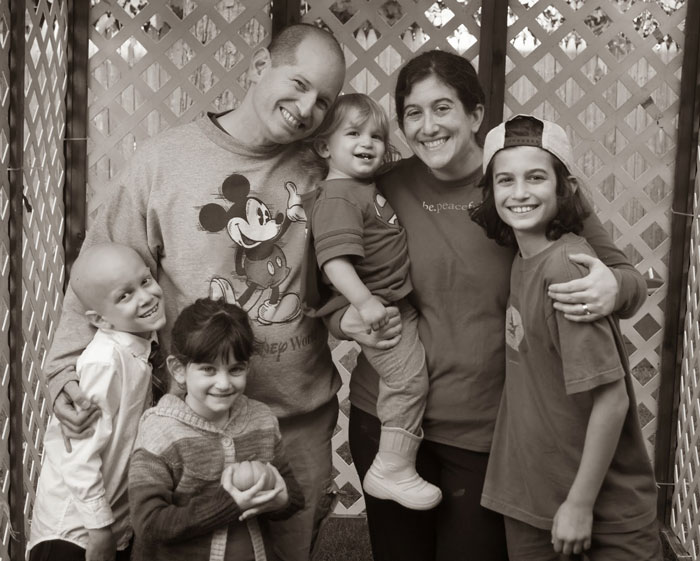 This week is Sammy’s birthday. He would have been 9 years old. In honor of that missed milestone, I’m asking you to give $9 or any multiple of 9…how fast can we reach this goal?

From the bottom of our broken hearts, thank you.