‘Until We Find a Cure’: Childhood Cancer Survivor Rallies the Crowd in Denver [VIDEO]

Before Preston Kilzer shaved his head for the seventh time last Friday, he gave this speech to a crowded room at the Fado Irish Pub head-shaving event in Denver.

I’m Preston and I’m 12 years old. I am a cancer survivor. When I started kindergarten at the age of 6, I was bald and just finished battling a very tough war.

This is my story.

Several years ago my mom noticed bump on my neck. She took me to the doctors who diagnosed me with stage 3 Hodgkin lymphoma. This is a type of blood cancer. I was just 5 years old and had cancer in my neck, chest, liver and spleen. I had a younger sister who was 4 and a brother who was just 1.

For many months I had to go to Children’s Hospital Colorado for chemotherapy, where they pumped seven different kinds of cancer-killing drugs into my body. It made me very sick, I threw up a lot, got painful mouth sores and lost all my hair.

I fought as hard as I could and thankfully beat my cancer. To this day I am still in remission and now considered cured!

My first St. Baldrick’s shave was just three weeks after I was diagnosed. I was cheered on by hundreds of people and shaved off the little hair I had left.  I will remember that day forever. Would you believe I am still shaving my head with many of the same people who shaved with me when I was just 5? This community is strong and the friends I’ve made I will have forever.

This year I fight for my many friends who have lost their lives or keep relapsing with their disease. One special friend of mine, Justin, died over a year ago. We met in the hospital fighting cancer together but sadly after many relapses he died. Do you know the money raised over the past few years kept him alive so he could have more time with his family and friends? We would play Legos in the hospital and went to camp together but without St. Baldrick’s he would not have been able to do this. 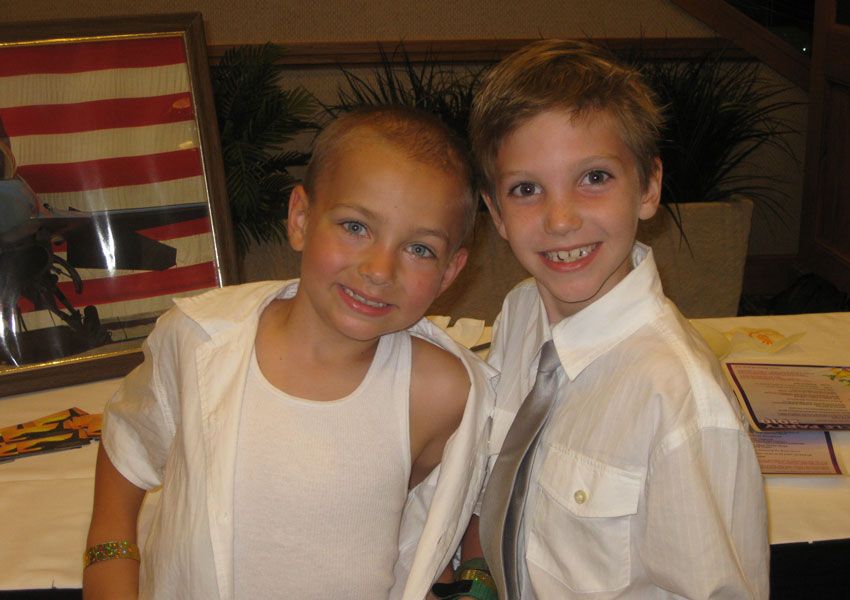 Preston with his friend Justin, a 2012 St. Baldrick’s Ambassador. Justin passed away in January 2014 after fighting childhood cancer for seven and a half years.

I am so thankful I had as much time with him as I did and it’s thanks to the money raised through St. Baldrick’s. I miss my buddy Justin and so many others who have lost their lives.

See where the money goes >

So even though I’m cancer free, I know many other precious children are not. I want to share with as many people as I can that kids are still getting cancer and not surviving. We have to keep fighting to find a cure.

Join Preston and support research for cures for all children with cancer.

Hear more from Preston on this NBC Nightly News feature: