When a 23-year-old leukemia patient ran out of treatment options, she joined an immunotherapy clinical trial supported by the St. Baldrick’s Foundation. You can help fund the research that saved her life. Get involved. 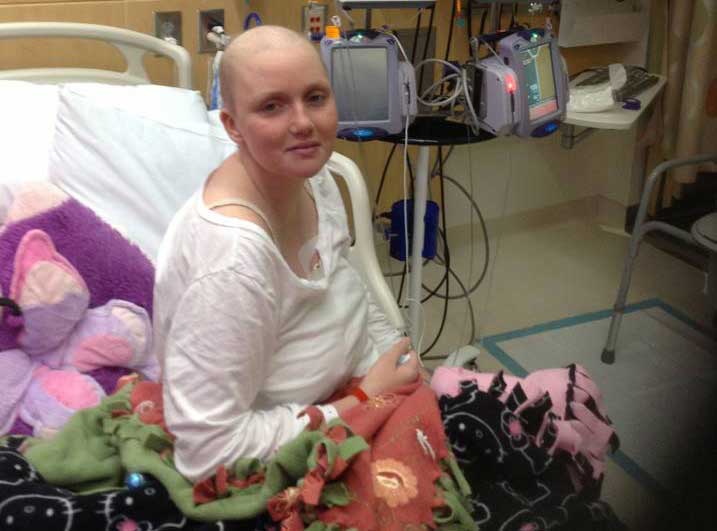 Lynsie after undergoing the immunotherapy treatment that saved her life.

When Lynsie Conradi’s leukemia relapsed for the third time, her doctors told her she had, at best, six months to live.

It was hardly the news the 23-year-old expected to hear after having spent so much of the last eight years fighting for her life.

Lynsie had been diagnosed with acute lymphoblastic leukemia, or ALL, when she was 15. She fought it into remission twice. But by the third time it came around, her doctors told her it had become resistant to chemotherapy.

The standard treatment for relapsed ALL involves a bone marrow transplant, but Lynsie would have to be in remission for them to do the transplant. It seemed her only option was to hope for a miracle.

That is, until her doctors told her about a new phase 1 immunotherapy clinical trial funded in part by the St. Baldrick’s Foundation.

The treatment would involve taking Lynsie’s own immune cells and modifying them with a gene designed to recognize and attack the cancer. The trial was enrolling patients, like Lynsie, whose doctors believed couldn’t be cured with the standard treatment.

When Lynsie heard about it, she was all in. “I was ready to do anything the doctors wanted me to do,” she said. “I just wanted to live.” 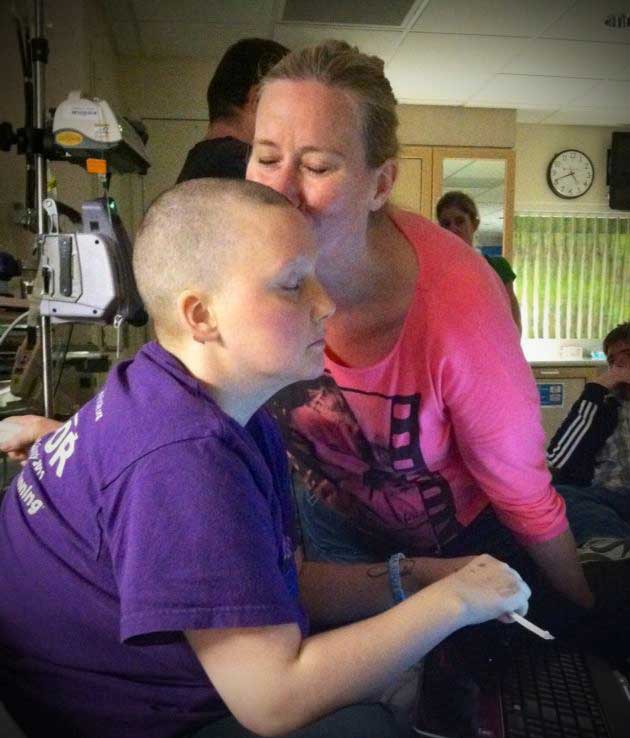 Lynsie and her mom in the hospital before Lynsie’s T cell therapy.

T cells are an important part of your body’s immune system. They have the ability to kill cells that your immune system has recognized as harmful.

But part of what makes childhood cancers so deadly is that they have come up with ways to outsmart the immune system.

That’s why the Stand Up to Cancer – St. Baldrick’s Foundation Pediatric Cancer Dream Team is looking for ways to help the immune system to outsmart the cancer.

Rebecca Gardner, M.D., Ph.D., a Dream Team member, is leading the clinical trial at Seattle Children’s Hospital, where Lynsie was treated. “What we do is reprogram the T cells so the tumor cells can no longer escape immune surveillance,” she explained.

To do this, Dr. Gardner and her team draw some of the patient’s blood to harvest their T cells. “T cells are found floating around in your blood which makes them easy for us to retrieve,” she said.

They then take them back to the lab and insert a new gene into the T cells that allows them to recognize a protein found on the surface of leukemia cells. The gene is called a chimeric antigen receptor, or CAR.

The CAR-modified T cells spend two to three weeks growing and multiplying in the lab. Once the cells are ready, they are sent back into the patient’s body in an infusion — similar to a blood transfusion — to fight off the leukemia.

“When the T cells are given back to you, it takes a few days for them to re-adjust,” Dr. Gardner said. The patient might feel very sick and experience flu-like symptoms during this time.

Lynsie admits she felt fine for the first two days after her T cell infusion, but spiked a fever on the third day and ended up in the Intensive Care Unit. “But after the fourth day, I felt completely fine,” she said.

By then, Lynsie’s reprogrammed T cells were off to work, doing just what they were supposed to: killing leukemia cells. 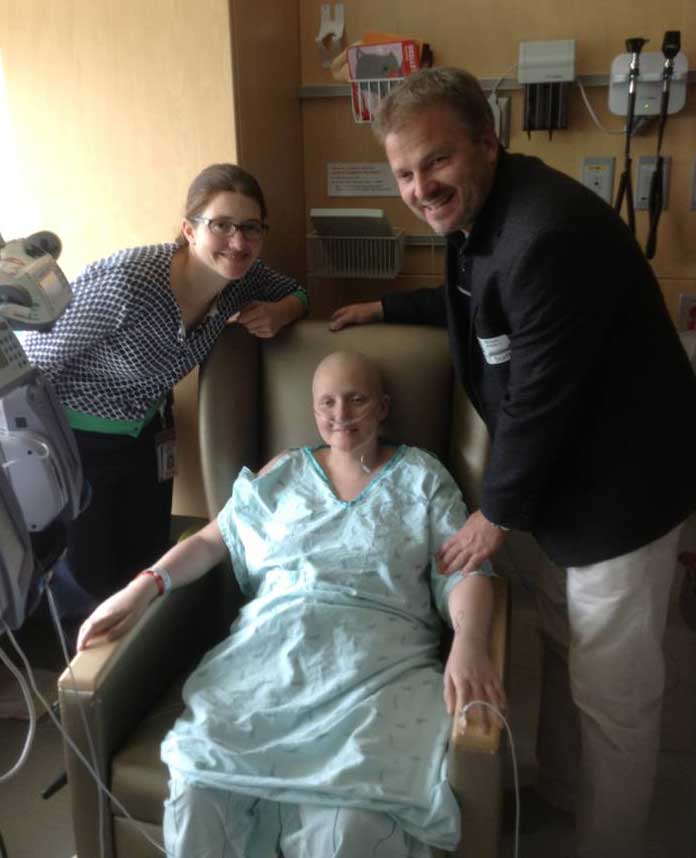 Just nine days after Lynsie’s T cell infusion, she received the news she’d so fervently hope for. The doctors could detect no cancer cells in her body. She was in remission.

Thirteen months later, Lynsie is still in remission following a successful bone marrow transplant. But life after transplant has hardly been easy.

“The bone marrow transplant has been very difficult for me and continues to beat me down daily,” Lynsie said. “I have lost almost 35 pounds. I’m in pain and my stomach is always nauseated.”

Dr. Gardner hopes that one day a stem cell transplant won’t be necessary after the T cell therapy, but for now, researchers are erring on the side of caution.

“We know that before Lynsie got her transplant, we couldn’t find any leukemia cells, and we looked really hard and used tests that can detect very small amounts of residual leukemia,” Dr. Gardner explained. “What we don’t know is with T cell therapy alone, how long would that remission last?”

But researchers might find out soon. “There are some patients who are receiving T cell therapy and opting to not receive a stem cell transplant,” Dr. Gardner added. “Those kids will be very important in learning the answer to this very question.”

If T cell therapy alone does prove successful in curing patients of their leukemia, it could become part of the standard course of treatment, eliminating the need for toxic chemotherapy regimens that can permanently damage the heart and other organs. 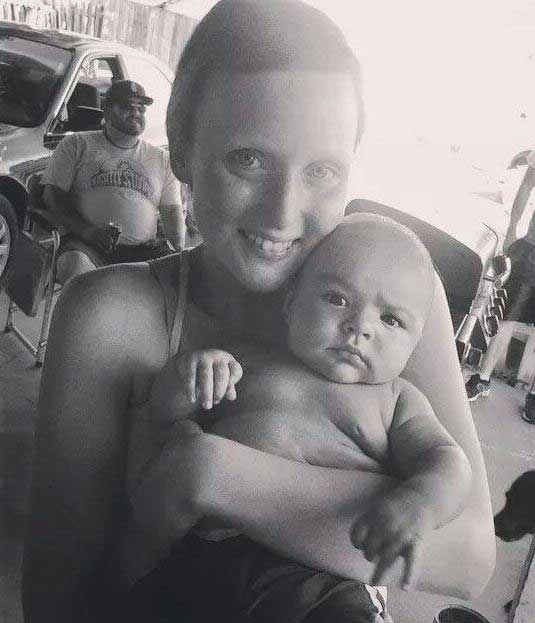 And if T cell therapy were to replace chemotherapy entirely for kids with ALL, they could be done with treatment in a matter of weeks, as opposed to three or more years.

That’s something that both Dr. Gardner and Lynsie — who has had more than her fair share of chemotherapy — are hoping for.

“After going through this therapy, Lynsie and her mom both said that they would take T cell therapy over chemotherapy any day,” Dr. Gardner said.

“The T cell therapy is very non-invasive and I had absolutely no side effects at all after the fever and [low] blood pressure,” Lynsie echoed.

Right now, the therapy Lynsie underwent is only available to certain ALL patients who, like Lynsie, have exhausted all the standard treatment options, but researchers are working to find ways to bring this therapy to children with other types of cancer.

And with the Dream Team working on it, the solution could be arriving sooner than we’d thought.

“One of the most important things about the Dream Team is it gets everybody together,” Dr. Gardner said. “We are all working towards the same goal, and the Dream Team facilitates collaboration. And with that, we can move this research forward much more quickly, and work cohesively to bring this therapy to all pediatric cancer patients.”

You can help fund the research that saved Lynsie’s life. Donate or get involved.

Read more about the research we fund: