At the Water’s Edge: A Mother’s Plea

I took my boys camping at this beach we love so much. We have been taking the kids there since they were babies.

We took our son Will there a lot when he was going through cancer treatment. He couldn’t go in the water because we couldn’t risk infection, but I used to carry him on the beach and dream of the day he would be able to dance in the water.

When it finally did happen, I cried; we were so lucky.

While I was at the beach this time, 10 years later, I watched my son walk up and down the beach taking pictures and looking for shells. And I smiled. But at the same time, my heart hurt because I remembered a picture posted last spring — exactly a year ago — of a little boy named Ryan. 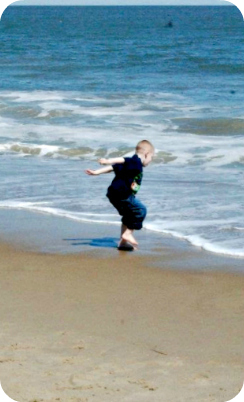 Ryan had just finished treatment for acute myeloid leukemia. The picture of him was snapped as he danced in the wake of a gentle wave lapping towards the shore. The caption on this picture said: “Ryan beat his leukemia March of 2012 and now can dance in the ocean.”

So I decided to write Ryan’s name in the sand and watch and wait until it disappeared. First I just wrote his name. I waited and waited, but the waves teased me by drawing close, but then pulling back.

There was something missing, so I drew a heart around his name. The waves would roll back in, just miss it and then retreat back into the vast ocean. This went on and on until my son walked over to me. Almost at that very moment, a larger wave washed over Ryan’s name and it disappeared from the beach. 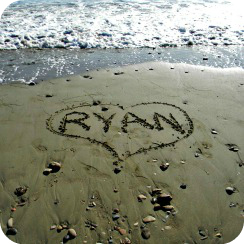 When I looked back, there was no evidence of Ryan’s name in the sand. It was gone. Washed away. As no one else on the beach really paid attention to this process I went through, so I was the only one who really knew it had been there in the first place. All they were able to see was a woman standing at the edge of the water.

They didn’t understand the sentiment behind the moment, or the grief involved. They never had the opportunity to see the image of the little boy dancing in the ocean, celebrating the end of his cancer treatment. They didn’t see future images of the same boy ravaged by toxic medication which should have cured him, but instead killed him.

And chances are, if you are reading this, neither did you. So why am I writing this?

Well, I am sharing this rather lengthy narrative to send forth a plea to people who have never witnessed the miracle of a child celebrating his opportunity to dance in the ocean after bravely fighting a monster named cancer. 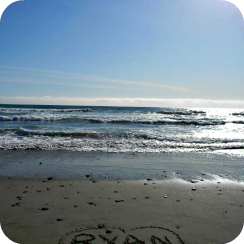 I want you to take this moment to picture 36 names etched into the sand. And behind each name, a parent standing there, eyes trained on the ocean, hoping and praying the waves will keep far from the name of their precious child. Those parents will stand there all day, hoping, praying, crying, but at the end of the day, the waves will come in full force and wash away seven names — just like Ryan’s.

The sand will be pulled back into the ocean and all evidence of those seven children will be gone from the world — except in the hearts of those who loved them.

And the children who survived will wander that beach for the rest of their lives, their names etched somewhere where the waves can reach them at any time.

You don’t have to be someone who has had a child’s name etched in the sand to help keep the waves at bay.

You don’t even need to have ever stepped foot on a beach. What you have to do is understand that any child’s name can be transcribed at the water’s edge at any time. And you will never know the agony involved in seeing the letters of your child’s name forming in the sand until you are standing there watching the process and powerless to stop it.

So please, help us, the parents who keep watch over the names, in our fight to cure cancer. Please help us spread awareness. Please help us fund a cure. And, please, help us work towards a day where each and every parent can help their children build sand castles on the beach instead of keeping vigil at the water’s edge.

St. Baldrick’s will make grant-funding decisions in mid-June that will determine the research that is funded in the coming year. It’s not too late to make an impact.