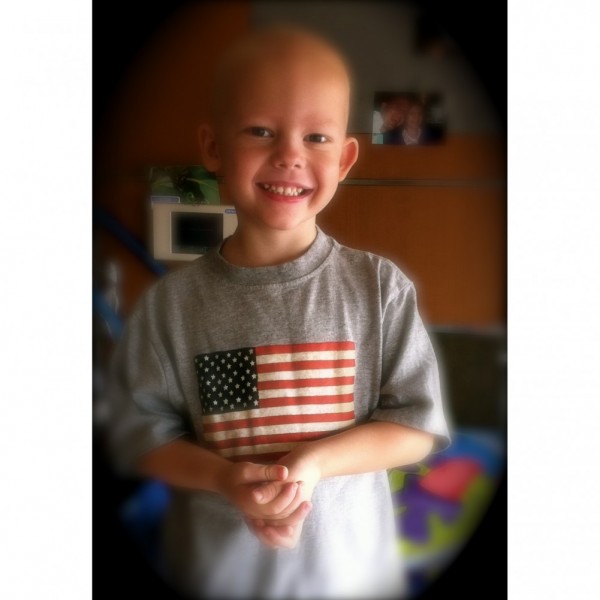 We all know about Pediatric Cancer. It’s what we’ve devoted our lives to because of some circumstance that landed in our lap or was shoved into our life. But, have you ever thought of what it is like for a military family in a foreign land – far away from family and friends – to hear the words “Your child has cancer"? It happens. It happened to our son, Ryan. I would like to share his story. Ryan’s story starts as most do. His began with a headache. The post we were stationed at only had a clinic, so we were sent off-post to a German Hospital for further tests. Those tests revealed Ryan had AML after 3 weeks of grueling tests, Acute Myeloid Leukemia. My son was five years old and he had cancer. Ryan and I had to leave Germany as soon as possible and return to American soil to start treatment. We had four days in which to accomplish this. In that time Ryan had to say goodbye to his friends, his sisters, his dad, and the home he had known for two years. We had no idea where we were going; how things were going to work out; how long it would take for my husband to get orders; how and when our car and household goods would be shipped; and how long our family would remain separated until the military side of things could be taken care of. When Ryan and I boarded a C17 Wounded Warriors flight from Landstuhl to Andrews Air Force base in Maryland, I had no idea where we were going and what was going to happen. I was terrified. I spent the nine and a half hour flight explaining to him why there were wounded Soldiers on the plane and trying to assure him that everything would be okay. It took a month for my husband to finally arrive with our daughters from Germany. After they arrived, we finally moved into a house 6 weeks later and Ryan continued to battle his cancer. He completed his treatment in March of 2012. We are on top of the world. We felt whole again. Ryan relapsed five short weeks after being in full remission from his four intense rounds of chemo. Ryan received 2 more rounds of chemo starting in April of 2012 at Walter Reed National Military Medical Center before he was moved to Children’s National Medical Center in DC to have a bone marrow transplant. He received another round of extremely harsh chemo with no time for his counts to recover and one week of cranial radiation. He also had one week of twice a day full body radiation. After all of this, the 3 rounds of back to back chemo and radiation, Ryan got a fungal infection in his lungs. We said goodbye to Ryan August 11, 2012, two days before his sixth birthday and five days before his bone marrow transplant. We will never recover from this. But we choose to continue to fight in his honor and his memory.