Another Christmas With Grace

Grace’s mom, Rebekah, remembers Christmas 2007 when Grace was in treatment for childhood cancer. 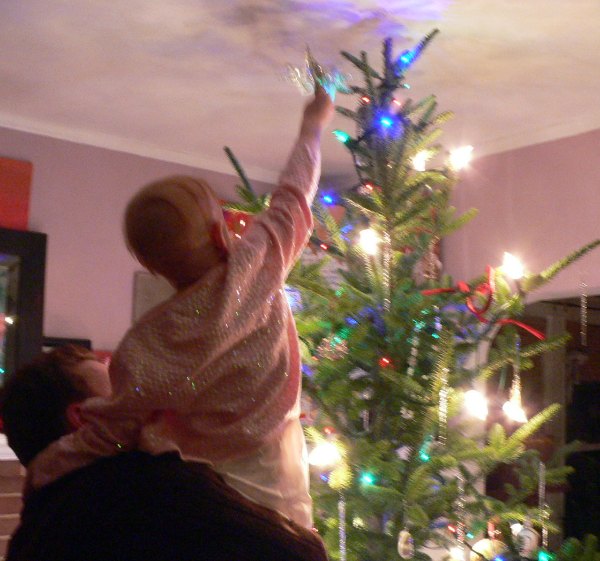 As Grace’s dad lifted her to place the star, my chest tightened — joy, gratitude, fear. Would this be our last Christmas together?

Three months earlier, in September 2007, doctors were performing surgery to remove a four centimeter mass from my daughter’s brain. Medulloblastoma. She was 5. I had to remind myself to breathe.

By October, we were back and forth from Providence to Boston so that Grace could receive proton beam radiation at Massachusetts General Hospital. Grace had recovered well from surgery, and we took that as a good sign for the next phase of treatment. But then the radiologists surprised us with the news that Grace’s tumor had regrown faster than anyone expected. Her cancer was reclassified as high risk.

For the next six weeks, Grace received the highest levels of radiation in conjunction with chemotherapy. Grace and I lived in Boston for the duration, while her dad and 9-year-old sister, Fiona, were home in Providence.

Radiation ended in early December. The MRI showed the tumor was gone. Having been blindsided with the tumor’s existence and regrowth, I wasn’t going to let my guard down, but I was going to get Grace home, be together as a family, try to recapture some of the normalcy, and, maybe, practice breathing.

Grace was frail and exhausted, but she had a month to recover before continuing chemo. We would have this Christmas.

Every year, we choose a Frasier Fir for our tree. We go with extended family to a tree farm, choose a perfect tree, cut it down, tie it to the car, and place it in the corner of our living room. The smell of pine fills the house. We take turns hanging the homemade ornaments, glass icicles, and travel souvenirs, and sharing the memories each treasure holds. Grace loves to place our star on top.

These traditions of the season remained, but Christmas 2007 was far more powerful than any I had experienced before. I felt both trampled on and uplifted. Each moment held new meaning.

Grace had cleared two major hurdles of treatment, and we had her home with us. Our family could not ask for a more wonderful gift.

Give a wonderful gift. Make a donation to childhood cancer research.