Every year, St. Baldrick’s selects five children to serve as Ambassadors. They represent the wide diversity of kids who are affected by childhood cancers and their stories underscore the importance of supporting childhood cancer research.

There is one common thread though – each child is more than their cancer diagnosis. They have their own favorite holidays, music, foods and hobbies. And as their families will attest, each child has their own unique personality from spunky and fun loving to compassionate and caring.

While we normally select five children – with one who has passed away from cancer representing the 1-in-5 who don’t survive – this year we have chosen six kids, in order to include twin brothers Seth and Joel, who both died months apart from each other. 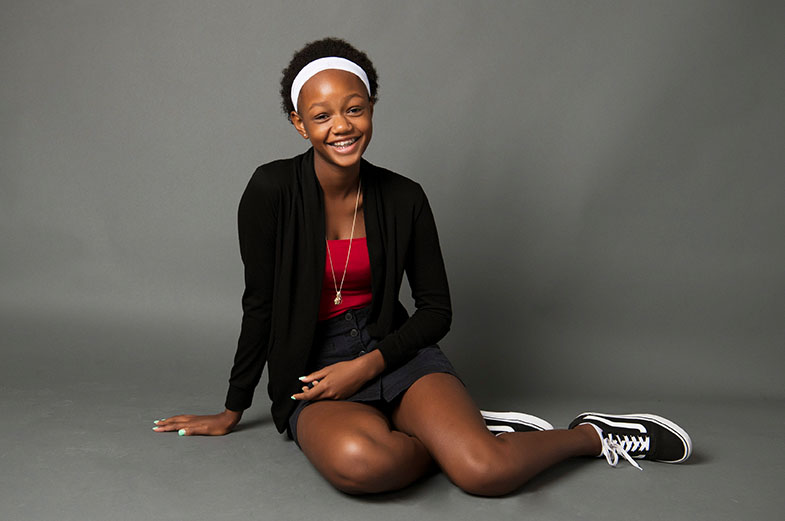 Shamari is a compassionate, determined, and athletic 15-year-old who enjoys playing lacrosse, hanging out with friends, listening to music, drawing, teaching herself how to play the ukulele and writing short stories.

In November 2017, during the middle of basketball season, she complained of pain in her right hip. When the pain didn’t improve, tests revealed a mass on her pelvis. Shamari was diagnosed with osteosarcoma, a bone cancer, in March 2018 and started treatment right away. She endured ten weeks of inpatient chemo, surgery to remove the tumor, followed by eighteen more weeks of chemo before finishing treatment in December 2018. But with a positive attitude, Shamari persevered through it all.

She is an amazingly resilient teenager and was back on the lacrosse field, her favorite sport, less than three months after her last treatment — while taking advanced placement courses at a competitive all-girls private school.

Her prognosis is good, as scans show no evidence of disease. Shamari’s cancer diagnosis and treatment haven’t derailed her dream of becoming an astrophysicist. 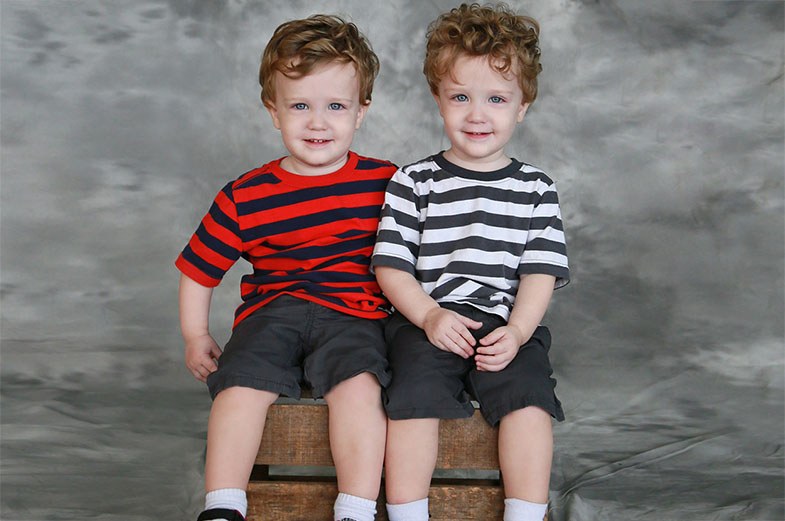 Joel and Seth were identical twins with a very special bond not even cancer could separate. They were born together. They slept together. They constantly played together. They ate every meal together. And they got into trouble together – like throwing clean laundry on the floor or climbing where they shouldn’t have been climbing.

The boys were not only twins but best friends. Along with their older brother, Nathaniel they would fill the Decker home with the sound of laughter and play. Seeing the boys push vehicles around and make loud noises or roar and stomp around pretending to be dinosaurs were familiar sights. Even the simplest games like playing in dirt or running through a sprinkler were pure joy for the boys just to be together.

But in an ironic twist of fate, the twins were diagnosed with cancer: Seth was diagnosed with a rare form of Acute Myeloid Leukemia in December 2016 and three months later, a biopsy revealed Joel also had AML. With the overlapping diagnoses and treatments, the family endured months of separation and treasured the few weeks they could be together at home.

Despite both boys receiving bone marrow transplants and enduring the complications from the procedures, they relapsed. Surrounded by their loving family, Joel died on November 1, 2017 at the age of three, followed by Seth on May 10, 2019 when he was four years old.

Joel is remembered for his joy and zest for life; he was always laid back and happy even through the cancer. Seth loved his family and was true to himself; he was stubborn and a fighter but even in pain he was sweet with a smile.

The Decker family firmly believes much more research is needed for AML, especially when the disease has relapsed. They have established a St. Baldrick’s Hero Fund, the Double Deckers Destroy AML, in memory of Joel and Seth to support research that will help find new treatments and cures so other families won’t have to say goodbye too soon. 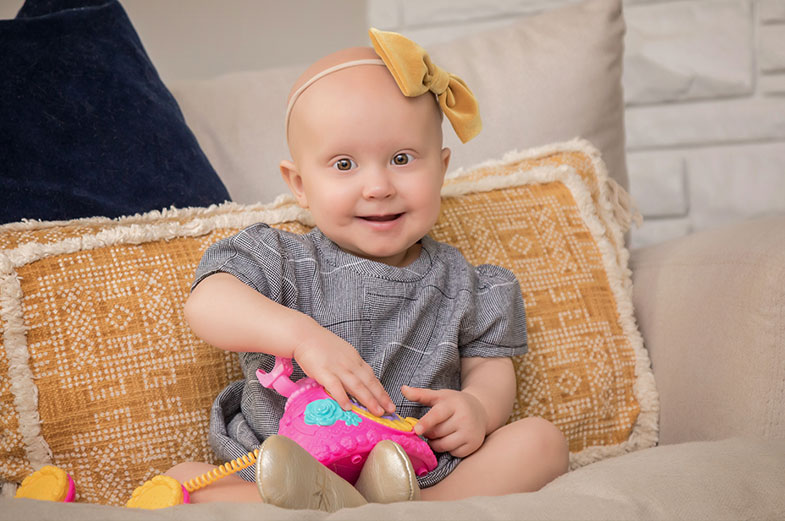 You won’t meet a braver toddler than Hudson. This little girl with a huge smile took on childhood cancer when she was just seven months old.

Diagnosed with Ewing sarcoma, this rare disease makes up only 2% of all childhood cancers and is very uncommon in babies. Chemotherapy began right away, and surgery to remove her scapula resulted in the good news of clean margins. Hudson had a positive attitude through it all, even looking forward to going to the hospital to see the doctors, nurses, and therapists who had become her friends.

Hudson continues to receive scans every three months and visits her hematologist regularly to ensure her little body heals and functions like any other toddler. While happy she is cancer free after treatment, her parents know that her cancer journey is not over and as she grows, they will need to remain vigilant with monitoring potential late effects from chemo.

Hudson’s mom, Hailey, says, “There are not enough words to say thank you to the researchers who are working on easing the side effects of chemotherapy for children who have to endure this in the future.”

But for now, Hudson is enjoying each day, loving her family and her favorite things: queso, french fries, the color pink, unicorns, the movie Aladdin, and all kinds of music – especially Lizzo and Kacey Musgraves. Best of all, she’s beginning to discover the wonders of life as a “normal” kid who is able to spend her time at the playground and not at the hospital.

Armed with her sparkling personality and the bravery many of us only dream of, Hudson’s family Is confident she can take on any challenge life puts in her path. 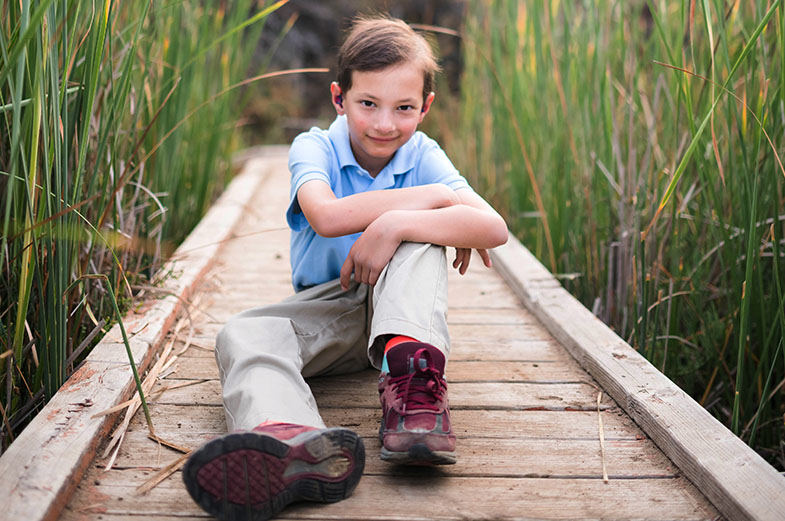 Nine-year-old Micah has spent the bulk of his life fighting cancer. But you can’t really tell by looking at him, seeing his smiling face, or seeing him attempt to get the better of his older brother, Asher.

Micah doesn’t remember a lot from his neuroblastoma diagnosis — he was just 15 months old when his parents got the news. However, due to stubborn disease and two relapses, he was in treatment for nearly seven years. He does have memories of some of the more recent experiences, though, including celebrating the end of treatment in February 2019.

Micah had three resection surgeries, 21 cycles of chemo, and 36 total sessions of radiation — in addition to clinical trials and even an IV radiation therapy called MIBG, which required him to stay in a lead-lined room for four days. Two separate phases of his treatment were centered around Unituxin, an immunotherapy drug developed with support from St. Baldrick’s that received FDA approval while Micah was in treatment. Unituxin has been so effective in improving survival among high-risk neuroblastoma patients like Micah that it is now part of the standard treatment approach.

Now that his blood work and scans have been clear for more than five years and he’s been completely off treatment for nearly a year, Micah is looking forward to a milestone event–his first survivorship clinic in 2020. In the meantime, he is back to being a regular kid and doing regular kid stuff — playing with friends, reading fantasy literature and mythology books, going to sleepaway summer camp, and visiting his favorite places: London, Los Angeles, and even the hospital, because as he says, “that’s where a lot of my earliest memories are and where I made a lot of friends … both kids and adults.”

His parents, Jeff and Kate, first got involved with St. Baldrick’s in 2014, and the whole family is passionate about helping to fund the most promising research for safer, better treatments for kids with cancer. The family established a Hero Fund, the Mighty Micah’s Mission Fund, aiming to raise at least $100,000 to fund neuroblastoma research.

Micah is very interested in science and hopes to grow up to become a doctor. He has a message for researchers involved with the foundation: “Thank you for creating new medicines for kids with cancer. Those medicines save kids’ lives, and one of them saved mine.” 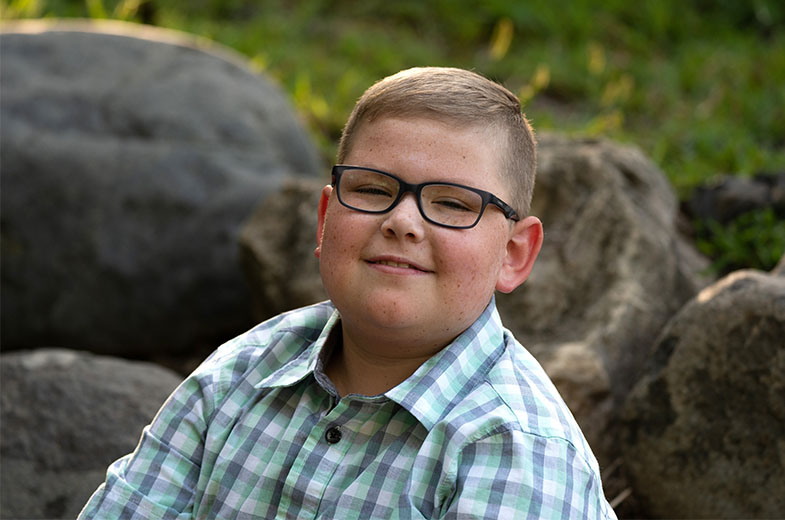 For his 11th birthday last summer, Austin made a wish list of things he wanted. No doubt there were matchbox cars or a new nerf gun on it and maybe a trip to the waterpark. But he knows the best gift he receives each year is the gift of being cancer free.

Diagnosed with a high-risk form of Acute Lymphoblastic Leukemia just before his third birthday, Austin faced 3 ½ years of treatment including intense chemotherapy, bone marrow biopsies, and six days of daily cranial radiation. But even before Austin could finish the protocol, he relapsed. At that point, a bone marrow transplant was his only option for a cure. When that didn’t work to eradicate the leukemia, Austin needed a miracle.

That came in the form of a remarkable gene therapy that uses a child’s own immune system to fight the cancer. Austin was accepted for a Phase 1 clinical trial, supported by the St. Baldrick’s Foundation, that would collect his T-cells in a lab and train them to seek out and kill the cancer cells. “It was,” according to Austin’s mom, Kim, “our last hope. Without it, he had less than six months to live.”

It worked and today, Austin is six years out from the clinical trial that saved his life and enjoys being an almost teenager. He loves steak and pizza, playing video games, basketball and nerf gun wars. His favorite places to go are Dave and Buster’s, fairs or a Cubs game.

Austin is also a Boy Scout which gives him an opportunity to develop what his mom calls his greatest quality–his caring and compassion for others.

Kim is grateful to the researchers because research is what saved Austin. She says to them, “Know that you make a difference every day and are saving lives.”

Because of research, Austin can look forward to making many more birthday lists.

Throughout the year, you’ll be hearing more about these kids, and more from their families. We invite you to join us throughout 2020 as we continue to shed light on the need for childhood cancer research – and please donate to help fund the research into better treatments and cures as we #DFYchildhoodCancers together.