Pediatric oncologist Dr. Tom McLean of Wake Forest Baptist Health has been awarded one of 29 new 2018 Infrastructure Grants from the St. Baldrick’s Foundation.

For more than a decade, Dr. McLean has been participating in head-shaving events with the St. Baldrick’s Foundation. That’s right – not only does Dr. McLean help fight cancer at Wake Forest Baptist Health in Winston-Salem, N.C., he’s also one of many researchers who help raise money for childhood cancer research by having his own head shaved clean.

It’s a fact the friendly doctor laughs off by pointing out he doesn’t have a lot of hair to shave away in the first place.

“The first time I shaved my head, I was nervous,” Dr. McLean joked. “But then I did it, and I quickly realized, you know, it’s not that big of a deal – my hair is pretty short anyways.” 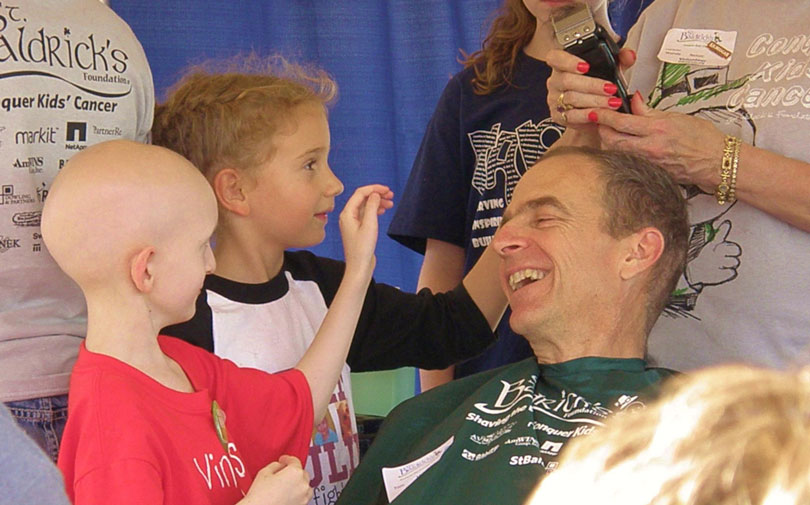 Dr. Tom McLean, winner of a 2018 Infrastructure Grant, has shaved his head for St. Baldrick’s 10 times.

Most of Dr. McLean’s head-shaving experiences have taken place at Finnigan’s Wake, an Irish pub in downtown Winston-Salem and a short drive from Wake Forest Baptist Health, where Dr. McLean has worked for 20 years. This year, the St. Baldrick’s Finnigan’s Wake fundraiser, held in late September, raised almost $50,000 for childhood cancer research.

For much of his time in pediatric oncology, Dr. McLean has enjoyed the support of St. Baldrick’s – including a 2018 Infrastructure Grant that will help Wake Forest carry out new clinical trials testing a variety of childhood cancer treatments. Almost all the clinical trials in pediatric oncology at Wake Forest are from the Children’s Oncology Group (COG).

These clinical trials play a huge role in helping researchers find new and more effective treatments for a variety of childhood cancers. At Wake Forest, Dr. McLean has helped oversee many of these trials, which involve comparing established and experimental treatments. Should a clinical trial show that a new treatment – such as a new drug – is more effective than an established one, it may become the new standard.

Overall, clinical trials represent a steady progression in the long and arduous fight against childhood cancers. “Little by little, we’re getting there,” Dr. McLean said.

When asked what’s changed the most about clinical trials since he started in oncology a couple decades ago, Dr. McLean pointed to the emergence of “targeted therapy,” or what he likes to call a “smart bomb for cancer.” This means cancer treatments have become more precise than they used to be, with oncologists and their teams being able to focus their attack on cancer cells, leaving healthy cells less affected. Harvesting the body’s immune system to fight cancer is a form of targeted therapy and is producing positive, exciting results.

It’s a step forward that’s particularly important for children, whose bodies are still developing and, therefore, more likely to experience major side effects associated with intensive cancer treatments, like chemotherapy.

“Without St. Baldrick’s, there’s no question we would not be where we are today,” Dr. McLean said.