St. Baldrick’s League of Legendary Heroes recognizes volunteers who have gone above and beyond in the fight against childhood cancers with three or more years of service. These are dedicated supporters of every role — shavees, volunteers, barbers, DWYW fundraisers, advocates and more! This honorable group is led by an Honored Kid known as the League Champion, who hopes to inspire members to continue fundraising for childhood cancer research.

Meet Brody, our 2020 League Champion. In 2014, doctors found a mass in the back of Brody‘s head. He was just 8-years-old at the time, and his mom, Sarah, says it was the beginning of life-changing events. 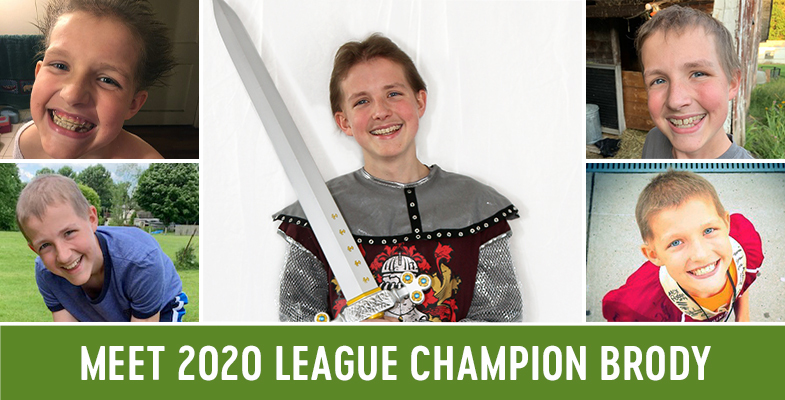 “Biopsies confirmed that it was medulloblastoma, and, after doctors removed the tumor, they told us Brody may not be able to talk, or walk, or that he’d end up with a shunt…and that he could die.”

Except, in Brody’s case, “he walks, he talks, he did not end up with a shunt, and he lived!”

With all childhood cancer treatments, Brody would have more struggles to face.

In 2014, after enduring brain surgery to remove the tumor, Brody faced six weeks of a chemotherapy and radiation combination, followed by six months of intensive chemotherapy. It was at that time that friends decided to shave their heads in Brody’s honor. During the event, according to his mom, “he was so sick from the chemo that the smells at the event hall were triggering his nausea. But we were able to get a photo of Brody with the shavees in the parking lot.”

Brody remained cancer-free for a year, before a questionable area in an MRI got doctors concerned once again. The tumor had come back — prompting six weeks of radiation directly aimed at the tumor, followed by a year of chemotherapy. Treatment was completed in October 2017, and after two years of monitoring, doctors have decided that they could schedule his next MRI in April 2020.

One Reason Why Brody Shaves His Head: Empathy for Others

Sarah says that Brody wasn’t bothered too much by losing his own hair during treatment. But, she continues, “It really hit him when he’d see girls in the hospital whose hair was falling out because of their chemotherapy. He felt that they ended up looking more like boys — and this bothered him. It was a big influence, and why he started shaving his head.”

To earn a spot in the League of Legendary Heroes, an individual must register as a participant at a head-shaving event or start a Do What You Want fundraiser for at least three years. As a Squire of Hope in the League heading into his 5th year of service and a leading fundraiser of St. Baldrick’s, Brody was selected as this year’s Champion of the League of Legendary Heroes — and hopes to inspire others to raise money, as he tells us, “for better medicines or medicines that don’t make you as sick.”

Team Brody raised more than $17,000 for St. Baldrick’s last year and has brought in over $54,000 the past three years. They plan to raise more in the new decade, too!

“It’s an honor to represent St. Baldrick’s, and I’m really excited to encourage others to shave their heads and donate. I think it’s great that doctors are working on medicines that can change lives like mine, and I’m definitely going to keep shaving my head!”

Congratulations to Brody for his accomplishments — and here’s to many more head shaves to come!

We invite you to join us — or advance to your next ranking in the League — and show your support by fundraising or donating to #DFYchildhoodCancers for kids like Brody.