Since 2011, the El Paso Rhinos Ice Hockey Team has shaved with St. Baldrick’s. This year, the cause hit close to home when a Rhino’s bantam player was diagnosed with pediatric cancer. Photos by Oscar Yanez

For the third year in a row, players on the El Paso Rhinos Ice Hockey Team in El Paso, Texas, gathered to participate in a head-shaving event, standing in solidarity with the thousands of children who are in treatment for cancer. 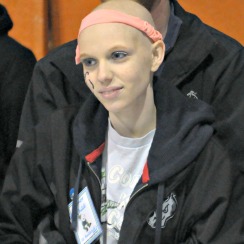 Katie, a 15-year-old Rhino bantam player, discovered a lump on her leg while playing hockey. Katie is now in treatment for alveolar rhabdomyosarcoma, a type of childhood cancer.

This year, they honored one of their own.

Katie first noticed a bump on her leg while playing hockey. A month later, the bump had gotten bigger, and her parents took her to the doctor. A tumor was discovered in her leg, and a CT scan revealed the cancer in her leg, hip, shoulder, and spine.

“As a team and as an organization, the St. Baldrick’s event really brings the Rhino family closer together,” says Tom Herman, Director of Youth Hockey and assistant coach for the Rhinos. 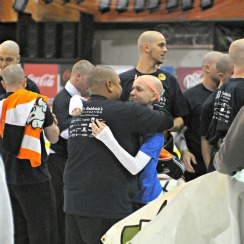 “Unfortunately, most families have been affected by cancer in some way. This past year watching part of the Rhino family battle cancer, and watching Katie go through everything she has, this event is the least we could do.”

For the team, Katie’s story has brought a new significance to their participation. “Any time you see the effects of cancer first hand, it really hits home and makes it that much more meaningful,” says Herman.

Not only have the Rhinos raised money for pediatric oncology research, but they have also inspired and encouraged Katie during her battle. 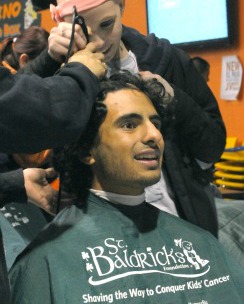 Katie was there as the Rhinos raised money and went bald as part of the Las Cruces, New Mexico, event. She got to see her teammates shave their heads in her honor — and she even helped shave some heads herself.

The support of her teammates gave Katie a reason to smile and one more reason to keep fighting strong.

For the Rhinos, what started as a way to give back to the community came around full circle and became a way for them to stand behind their teammate during a very difficult time.

Now, having her tumor removed, Katie is on the road to recovery and currently has no living cancer cells. The team hopes to see Katie back in her Rhino’s jersey and out on the ice, soon. 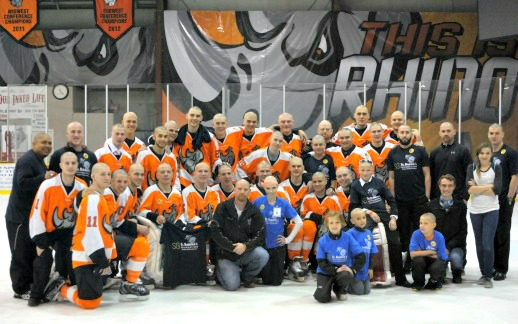 Katie with the newly bald 2013 El Paso Rhinos Hockey Team. The money raised at the event was donated to St. Baldrick’s for pediatric oncology research.