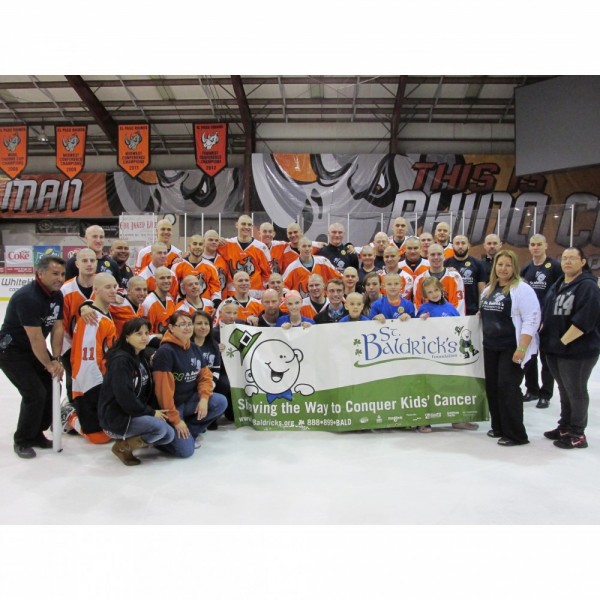 The El Paso Rhinos Junior A team will be participating in their 3rd St. Baldrick’s Event. The team, including the coaching and training staff, stick boys, and other Rhino members, will once again be putting their heads’ up for bid. Fans will be able to bid on their favorite Rhino member’s head to take the first swipe. This year’s Rhino team is comprised of players from ages 18 – 20 years old. Players come from all over the globe including the Czech Republic, Canada, and several different states. Please feel free to make a donation on your favorite Rhino or Rhino staff member. All bids for the head shaving will be done through email (info@elpasohockey.org). Visit www.elpasorhinos.com for more details. Earlier in 2012, one of the Rhino bantam players, 15 year old Katie Woods was diagnosed with Alveolar Rhabdomysarcoma, a type of cancer that is aggressive in nature. Katie first noticed a bump on her leg in April while playing hockey and when it got bigger a month later her parents took her to her doctor. A tumor was discovered in her leg and a CT scan revealed the cancer in her leg, hip, shoulder and spine. The tumor has since been removed and Katie currently has no living cancer cells. The 2012-13 El Paso Rhinos would like to honor Katie Woods for her courage and strength through her battle with cancer as they participate in the St. Baldrick’s event. Tom Herman, Director of Youth Hockey and assistant coach for the Rhinos added, “As a team and as an organization, the St. Baldrick’s event really brings the Rhino family closer together. Unfortunately most families have been affected by cancer and this past year watching part of the Rhino family battle cancer and watch Katie go through everything she has, this event is the least we could do. It’s been great to see Katie around the rink and I know we will see her back on the ice once again in her Rhino jersey. Her story is inspiring and her battle, hopeful victory and road to recovery is what this event is truly about.”