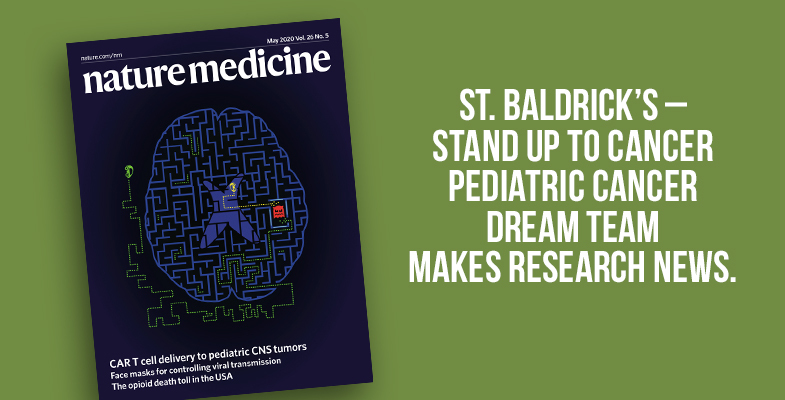 Triggering the Body’s Natural Defenses to Fight Off Cancer

One of the senior study authors and Dream Team co-leader, Crystal Mackall, MD, is a pioneer in the development of CAR-T cells, which are immune cells engineered to specifically recognize markers on cancer cells and then attack them. The Dream Team has engineered cancer-fighting immune cells to do this while leaving the healthy tissue alone.

CAR-T cell therapies have shown great success in some blood cancers, but solid tumors — like those in the brain — have been a much more difficult endeavor.

Babies and toddlers with ATRT brain tumors treated with standard therapies today experience catastrophic side effects from surgery, chemotherapy and radiation. That’s one reason it’s important to develop a way to attack cancer cells – and only cancer cells – with immunotherapy, an entirely different type of treatment.

The new study showed that ATRT tumors have substantial amounts of a protein marker called B7-H3. By creating CAR-T cells that recognize and specifically target B7-H3, researchers found the CAR-T cells were extremely effective and eliminated all the tumors.

One of the challenges of using CAR-T cells to treat solid cancer and especially brain tumors, is getting the cells to travel from the bloodstream to the tumor site. To overcome this challenge, the researchers sought to discover the best way to administer the CAR-T cells. They tested three routes: into a vein, into the brain tumor itself or into the cerebrospinal fluid, which bathes the brain. The results showed that administering cells into the cerebrospinal fluid was most effective.

Administering directly into the cerebrospinal fluid required 10 times fewer CAR-T cells to cure the tumor than injecting into a vein. With fewer cells the treatment was also less toxic.

An Effective Treatment with Protection for the Future

One of the most promising aspects of the research was that CAR-T cells administered directly into the cerebrospinal fluid continued to live on well after the cancer was eliminated. This indicates that these CAR-T cells may offer prolonged protection against cancer relapse.

Several clinical trials using CAR-T cells for children with brain tumors have launched at three sites within the ST. BALDRICK’S – STAND UP TO CANCER PEDIATRIC DREAM TEAM, including a trial targeting B7-H3 for which patients with ATRT are eligible. Links to these trials can be found here: