Happy Father’s Day – To a Child Love is Spelled T.I.M.E.

They say you can always tell what’s important to someone by how they spend their time. The best dads spend it scaring away the monsters in our closets, continuing to read each time we say, “One more time,” and baking in the sun just to see us score our first home run. Their pride and joy at even our most minor accomplishments makes us feel like we can take on the world. 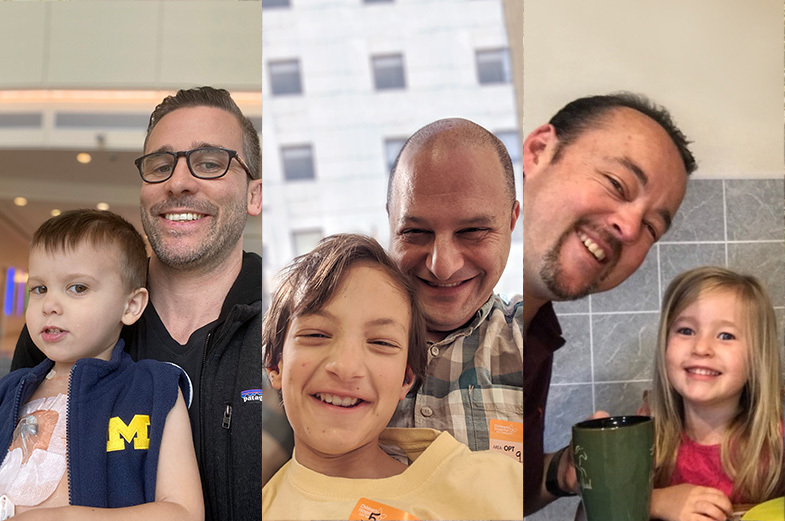 From left to right: David and son Finley, Jeff and son Micah, Bobby and daughter Rebekah.

To celebrate Father’s Day, we’re spotlighting three very special Fathers in the St. Baldrick’s community. All of them have had their lives shaken by cancer. Each of their stories covers a different chapter in the story and journey of survivorship.

Until March 5, 2020, life was pretty good for David O’Hara. Blessed with three children, aged 5, 3 and 18-months, he and his wife Risa were seeing the world through new eyes. But as the rest of the world braced to battle the global pandemic, they were taking on a much scarier opponent. Three-year old Finley was diagnosed with Stage 4 Wilms tumor, a kidney cancer.

With four words, “Your child has cancer,” life suddenly ceased to make sense. Every parent’s worst nightmare was happening to them. Suddenly things that used to keep them up at night – work, retirement funds and choosing schools for their kids – fell to the wayside. They were now laser focused on one thing… getting Finley the very best care.

Understandably the emotion was raw and the fear, palpable. He echoed what many parents of children with cancer do, he felt a lack of control. He says, “There’s nothing that we can do or say that’s going to change the outcome at this point. So, we’re putting all of our trust and faith into the treatment plan.” Another challenge is helping 3-year old Finley understand when he leaves the hospital, this won’t be over. 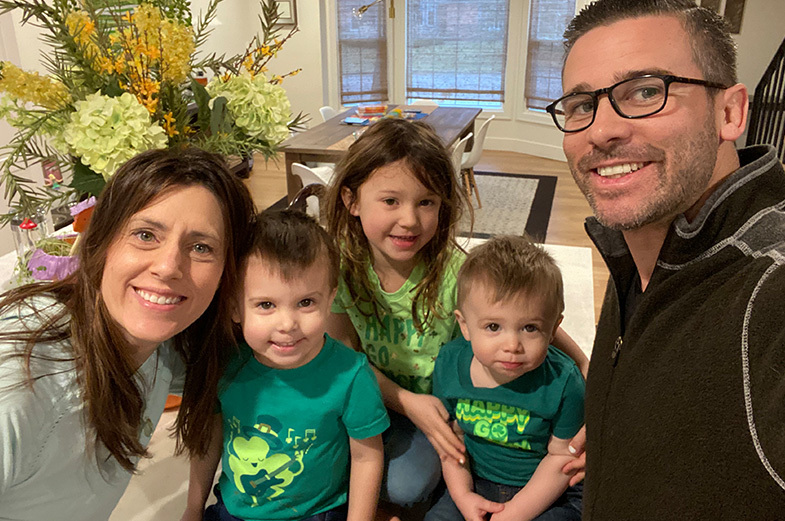 David and his wife read everything they can to better understand and have become “amateur experts” so they can make the best choices and regain some of the control they’ve lost.

Finley’s being treated at C.S. Mott Children’s Hospital in Ann Arbor, Michigan, by doctors who have received grants from St. Baldrick’s. David says, “They’ve got some of the best and brightest there and on top of the expertise, they just make the experience as enjoyable as they can for kids.”

Every day David looks for opportunities to help make the journey easier for Finley. Recently David shaved his head to help make Finley feel better about losing his hair. Finley loves it and they’ve raised almost $28,000 for research to find cures. And because Finley loves superheroes, David painted his face mask purple to look like a superhero mask. “It’s important to fly in those moments of joy,” David says.

“It’s a terrible journey we’re on and nobody wants to be in this club – the Cancer Parent Club,” says David. Finley’s treatment is scheduled to last 31 weeks and if all goes as planned, October 12th will be his last day of treatment. David still worries about his retirement account but says he’d trade it all in to not be in this position. There’s not a minute in the day that David isn’t thinking about Finley and all the possible outcomes ahead.

David is learning to appreciate every moment. Even when Finley barges in while he’s on a conference call to show David he can dance like a robot, David smiles and says, “Show me!” He says, “Every day is like Father’s Day because I have no idea how many more Father’s Days I have with Finley or anyone for that matter.”

CHAPTER 2: No Evidence of Disease

For Jeff Bernstein the emotional nerves aren’t quite as exposed as they once were but the fear is still just under the surface. Jeff and his wife Kate were enjoying life with sons Asher and Micah. Micah was just 1-day shy of 15-months when they brought him to the hospital for IV antibiotics to treat pneumonia, but he wasn’t responding to treatments.

Before the diagnosis, Jeff was like most dads, he simply hoped his sons would grow up to be good people who would make a positive difference in the world. But after Micah was diagnosed with high-risk neuroblastoma, a new wish rose to the top of his priorities: the hope that Micah would get the chance to grow up. The family was told they’d have to endure the most difficult year of their life. Little did they know that Micah would be forced to endure years of harsh treatments and wouldn’t end treatment for seven years. 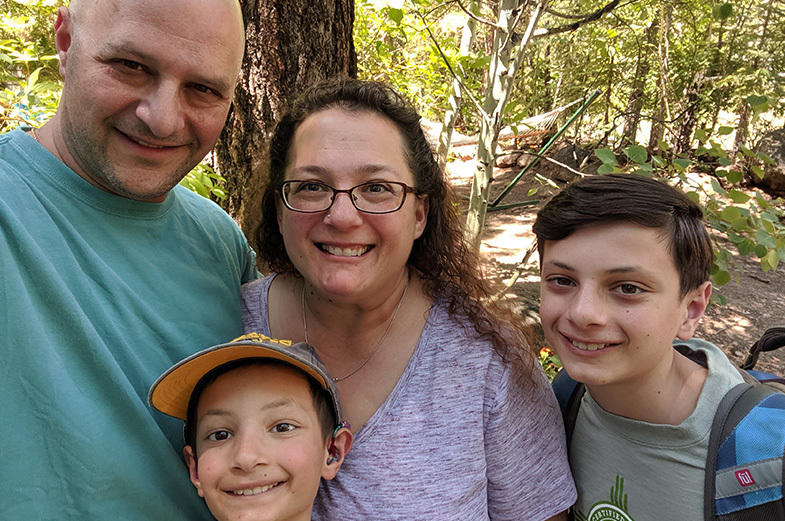 No Reason to Relax

Micah has been NED (No Evidence of Disease) since August 2014, though treatment continued through February 2019. Jeff says, “As a father and parent I’m relieved, but the fear never goes away because the risk never goes away.” Waiting for the results of scans never gets easier. Every time the doctor provides results Jeff gets that feeling in the pit of his stomach. And every time the doctor says, “Everything looks great,” Jeff can’t help but think, “For now.”

Micah is now a happy 9-year old who’s full of energy. Before becoming a dad, Jeff says he used to daydream of hopefully one day celebrating Father’s Day with his family and remembering to take a moment each year on that day to watch his kids growing up. Today, thanks to research, he has that opportunity.

Micah recently signed up to shave his head to raise funds for St. Baldrick’s for the fourth time. When asked why, he says, “Because I got off lucky.”

To put that into perspective, Micah has had three resection surgeries, including the first to remove his primary tumor, 21 rounds of chemotherapy and 36 rounds of radiation – one of which required him to stay in a lead-lined room for four days. He’s had a bone marrow transplant, immunotherapy and has taken part in five clinical trials. And now he’s shaving and raising funds to give other kids a better future.

Nothing makes a father prouder than watching his child grow up to be the person he always knew they could be. For a pediatric cancer survivor or their parent, the battle’s never really over. But instead of focusing on the fear, Jeff focuses on his greatest hopes: That both his sons will be able to do whatever they want in life and that Micah’s medical history won’t hold him back. Jeff says, he “can’t wait to see where life takes them.”

It was almost 32-years ago that as an 8-year old, Bobby McQuin was diagnosed with leukemia. All he remembers from the day of diagnosis is the look in his mother’s eyes – they said it all. His treatment went far beyond the normal three-year regimen.  He relapsed twice, once in his central nervous system. And had a bone marrow transplant – fortunately his brother Craig was a match.

Finally declared cancer-free on September 30, 1993 at the age of 14, he was told that due to the side-effects of his treatments, he’d never be able to have children. He openly wept – he was heartbroken. As the eldest of seven siblings, he had always dreamed of being a dad.

He’d always wanted that idyllic Americana family. His dad was easygoing and would take him out back and throw the ball around. So, Bobby dreamed of one day teaching his son sports or taking his daughter to the father daughter dance. But it was not to be. With the support of his family he got on with a life that had been so disrupted. 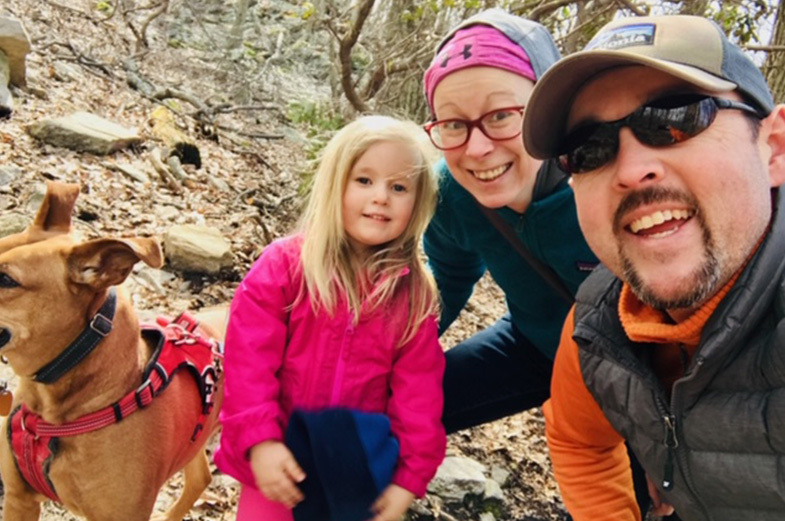 The McQuin’s are a tight, supportive and loving family. After Bobby was declared free of cancer, the entire family rode across the country on bicycles, not once but twice, raising money and awareness for childhood cancers. First dipping their wheels in the Pacific and then in the Atlantic. In between they stopped at various children’s hospitals to visit with children in treatment for various cancers, sharing his story and encouraging hope.

More than 20 years later, what was a horrible wrong became a surprise blessing. Though he was told he’d never be able to have children, Bobby and his wife Megan were blessed with a baby girl — Rebekah.

Bobby recalls jumping for joy the moment Megan gave him the news. He still feels bad for the people living underneath their condo. He was so floored that he didn’t trust the first pregnancy test so he went to numerous drugstores just to find two more.  Bobby has a picture of all three positive tests lined up in a row. He intends to frame the picture and give it to his miracle daughter Rebekah one day.

Bobby now feels like every day is Father’s Day. When speaking of his daughter he absolutely beams with pride and unconditional love. He says, “We are so blessed and this isn’t just fatherly pride speaking and it’s not hyperbole but she’s just a fantastic kid and has always been a super gentle spirit.”

Bobby now enjoys seeing Father’s Day through Rebekah’s eyes. He loves the cards she makes for him and all the effort she puts into creating them. He can see how important it is for her to show her love for him on Father’s Day in particular. Most of all, he feels blessed and nothing sounds sweeter than his daughter whispering, “I love you daddy.”

Make it a Happy Father’s Day for all Fathers

For a father in the middle of one of these chapters it’s difficult to see past your own page.  But hopefully after reading the entire story – start to finish – we can all see there’s hope for a happy ending. After all, as Bobby said, “I’m a survivor, all 30 years plus and look at all the medical advances that have occurred during that time. The likelihood of success for children today is much higher.”

At St. Baldrick’s we’re working towards a future where more dads can celebrate their children’s survival. So, this Father’s Day why not consider a donation in your dad’s honor, to honor all he’s done for you. To all the incredible dads out there, Happy Father’s Day from St. Baldrick’s.