When the Vannie E. Cook Jr. Children’s Cancer and Hematology Clinic opened in the border town of McAllen, Texas, it offered care that otherwise would have been out of reach for many kids with cancer in the area. Today its young patients have the opportunity to participate in cutting edge research — the clinic, with the support of St. Baldrick’s grants, was accepted into the Children’s Oncology Group, or COG, and is now conducting COG clinical trials. 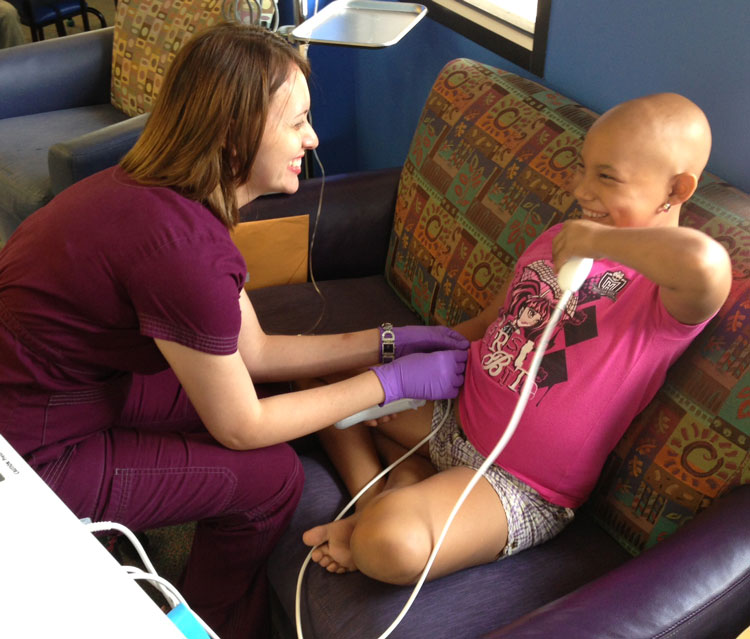 Alma, a nurse at the Vannie Cook clinic in McAllen, Texas, laughs with Leidy, a patient there who has now finished treatment.

The scope of the need for the clinic was huge. McAllen sits snugly against the Rio Grande River, which forms a natural border between the United States and Mexico. The population of McAllen includes many people without documentation, who might be reluctant to seek help when a family member becomes ill.

Before the clinic opened in 2001, the nearest cancer center care was beyond a second border of checkpoints separating McAllen from Houston and San Antonio. For families who had to consider the risk of deportation and who couldn’t afford a plane ticket, the decision of whether to seek care in the big hospitals was an agonizing weighing of bad odds.

“It was a catch-22,” said Dr. David Poplack, the director of the Texas Children’s Cancer Center, which operates the Vannie E. Cook Children’s Cancer Clinic. “And, as a consequence, many of these children just weren’t getting optimal care.”

The response to the clinic went above and beyond their expectations of only 40 patients the first year. Instead, the staff cared for about 400 children with cancer and blood disorders that year.

Now the clinic has seen thousands of patients, many of them underserved and low-income.

“It has always been challenging for us to fund the clinic, because the majority of the patients were without insurance. In fact, in the first year, we were actually afraid that we’d start up but not be able to continue operations,” Dr. Poplack said.

That’s where St. Baldrick’s comes in.

St. Baldrick’s support has been a crucial part of the clinic’s success and its acceptance into the COG. St. Baldrick’s has awarded Infrastructure Grants to the clinic since 2009, which most recently helped Vannie Cook hire Research Nurse Jill Hartley who will assist in overseeing patients who are treated on COG trials.

Read about the COG and its impact on childhood cancer >

Hartley is responsible for everything from enrolling patients on the COG trials to making sure every bit of documentation is in order. Her work is crucial to the clinic being able to pursue COG studies.

“It’s the same level of care that we provided beforehand, but the opportunities for our patients are so much greater — the fact that they can participate in research,” Hartley said of the clinic’s acceptance into the COG.

It’s not just the patients on the trials who can benefit — the COG also gains valuable data that could move research forward for all children with cancer. Most of the children treated at Vannie Cook are Hispanic, a demographic that’s grossly underrepresented in childhood cancer research, Hartley said.

“It’s an amazing story,” said Dr. Juan Carlos Bernini, Medical Director of the Vannie Cook Clinic. “The parents and the families are so appreciative and the community has been incredibly supportive. We’ve trained staff from that area and most importantly we’re providing superb care for the children who need it. Now they are able to participate in COG research and treatment studies.”

And St. Baldrick’s has been there every step of the way.

“St. Baldrick’s has been a true and valued partner with us in the evolution of our clinic,” he said. “We could not have done this without St. Baldrick’s.”