To Honor Her Husband’s Legacy, Jeni is Shaving Her Head

Jeni Donahue made an extraordinary decision to honor her late husband – to shave her head in his place. Keith Smith was a St. Baldrick’s shavee for eight years, personally raising more than $12,700 for childhood cancer research as a member of the Superheroes in Kilts team. In 2020, he even shaved while battling cancer, himself. 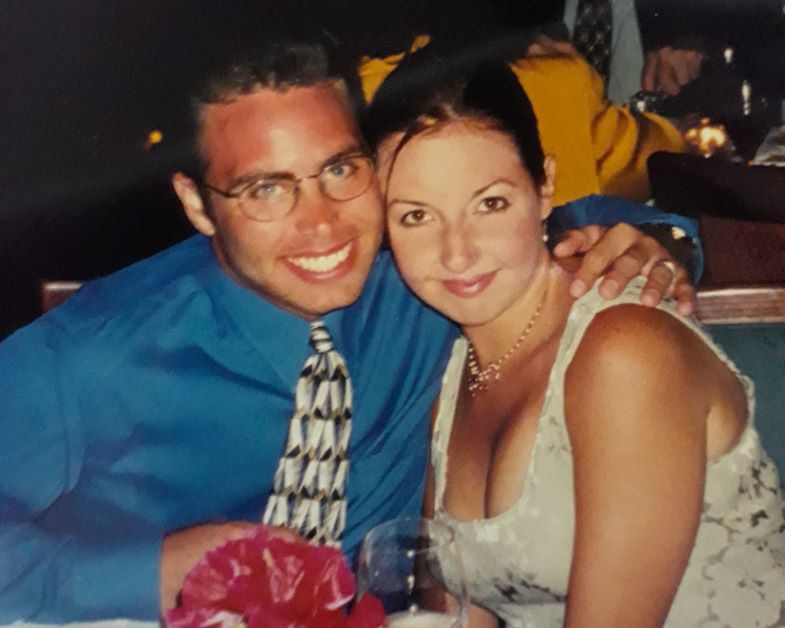 Tell us a little about your husband – How you met, how long you were married, and what you loved most about him.

Keith and I met on a blind date set up by some coworkers of mine. We talked on the phone for a week prior to meeting. He invited me to a 4th of July party and I almost cancelled because he was very shy on the phone. I am so thankful I went.  It was an instant connection in person. He proposed to me 3 months later (I know, crazy!) and 9 months later — a month shy of us dating a year — we were married.

We were married for 23 years, together for 24 years. He was a very hard-working man, always making sure to provide for his family. He was an amazing father and I love the example of a man, husband & father he was for our two boys, Ben and Noah.

He was a great friend to all. Whether you met him once or were friends for a lifetime you were family to Keith. You would be hard pressed to come across anyone with a bad thing to say about him. He was the absolute best of humanity. And despite working long hours in a labor-intensive job, he still donated his time on Saturdays to the Miracle League of Joliet, a baseball organization for mentally and physically disabled children, and to raising money for St. Baldrick’s.

I was blessed to meet a man, date a man, marry a man and start a family with a man who loved me with everything he had. He treated me with respect, was so caring, and always put his family’s priorities before his own. I am thankful every day that I found him.

How did Keith and you decide to get involved with St. Baldrick’s?

Keith found St. Baldrick’s through one of his best friends, Jonah Schneider [another long-time shavee], who had participated the year prior. Keith had talked to him about the organization and what they did, and he asked to join Jonah the following year. The Superheroes in Kilts team participated in St. Baldrick’s events at several different locations throughout the years. 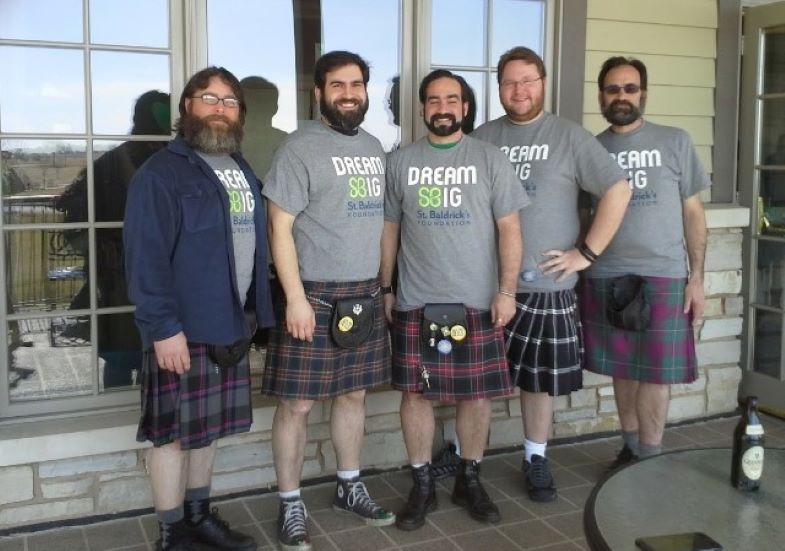 What did Keith love most about St. Baldrick’s?

He absolutely loved the brotherhood of the team and bonding through the cause. He was always trying to top himself from the previous year and loved coming up with fundraising ideas to try to continue to make the next year even bigger. He always had a sense of pride in what he was doing and the children it would help.

It’s so incredible that you are shaving this year. What do you think Keith would have to say about that?

He would have the biggest smile on his face that wouldn’t go away, and I know he would repeatedly just tell me how proud he was. My only regret is not doing it last year with him. Had we known last year would be his last year, I would have proudly sat next to him.

What has been the response from your community when they hear your plans to shave?

Most people are in shock at first. The thought of a female shaving her head seems to be more shocking to the public than a man doing it for some reason. I think because as women, we tend to hold more value and worth in our hair to make us what society deems as “beautiful.” That’s not the case for me anymore, hasn’t been for a long time. I have little connection with my hair and it making me feel better about myself or my looks.

A majority have gotten very emotional because they know how much this organization and the event meant to Keith, and they know it will be a very emotional and somewhat therapeutic moment for me as well. Some try to talk me out of it – LOL!

How are you feeling about your upcoming shave?

I am really excited and looking forward to it. I was hesitant at first, but as I navigate through my grief of losing my best friend and trying to find ways for the boys and I to not only honor him, but keep his memory alive, I think this will be a very therapeutic moment and a release of a lot of emotions that we are still dealing with. To honor my husband’s legacy and his life lived through this event will be an amazing moment.

Both of my boys will be shaving my head at this virtual event, each taking a side to shave. It will be very symbolic for them as well.

Is there anything else you’d like people to know about your feelings about St. Baldrick’s and its mission?

Throughout Keith’s year-long cancer battle, he had many hospital stays. The building at Northwestern that had the oncology floor for patients faced the Ann & Robert Lurie Children’s Hospital. We were right across the walkway. We could see the hospital room windows of these children that were decorated in drawings, cartoon characters. We could see the “get well” balloons and various stuffed animals and gifts sent.

Every time he was admitted to the hospital, Keith would say how his heart just broke thinking of children having to go through the same cancer battle and fight he was. He knew how hard it was on him, and we couldn’t imagine a child having to endure the same. The thought of a parent having to stand by and watch helplessly as their child goes through treatments, surgeries, needles and scans just broke us. It made him more determined to fight and to be at the shave for years to come to raise money so no child would have to fight this horrible disease.

It was this mindset that pushed Keith to attend last year’s event. Despite being very sick and still connected to his chemo pump, he was adamant that he would attend the event to be with his team. He was all smiles at the event, even though I knew he was very sick and needed to be home.

That was who Keith was. Life was bigger than himself. There was always a bigger cause or another person that needed the attention and the help more, and he was willing to push himself mentally and physically to help in any way he could to make that happen.

I am so unbelievably proud of him and the life he lived.  He was one of the good ones, gone too soon. 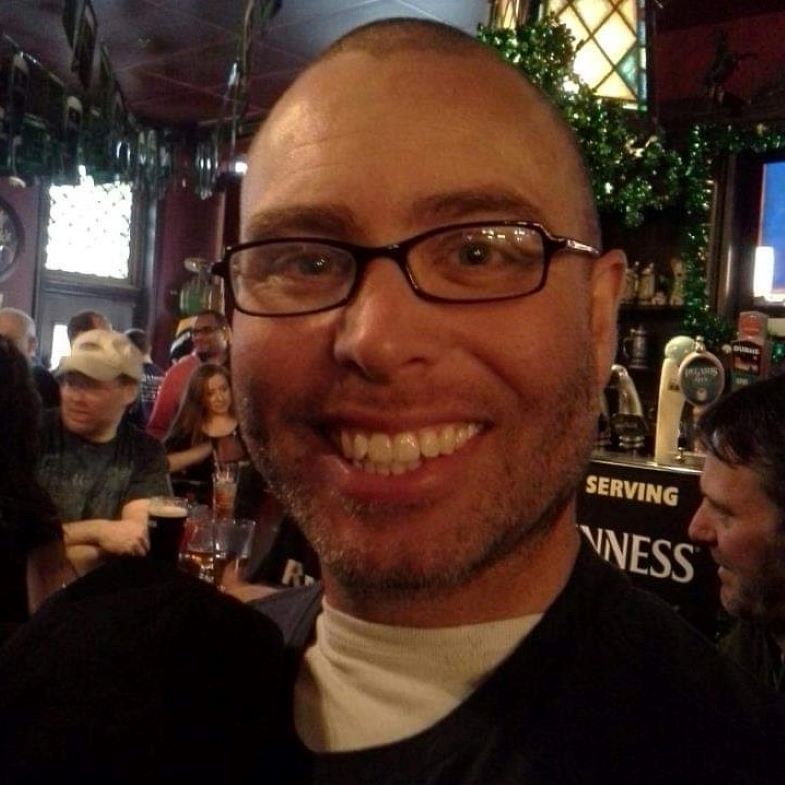 Thank you, Jeni, for honoring Keith’s memory by raising funds for research to help give kids with cancer the lifetime they deserve.

Jeni and the Superheroes in Kilts team are shaving as part of the virtual event supporting the Julia’s Legacy of Hope Hero Fund, honoring Julia Janes, who was diagnosed with Ewing sarcoma at the age of 16 and died of acute myeloid leukemia at age 20.

Help Give Kids With Cancer A Lifetime