Thanks to your continued support, pediatric cancer researchers are making progress towards better treatments and providing hope for more cures. Here are just four examples of the many research outcomes (and reasons for hope!) you have made possible: 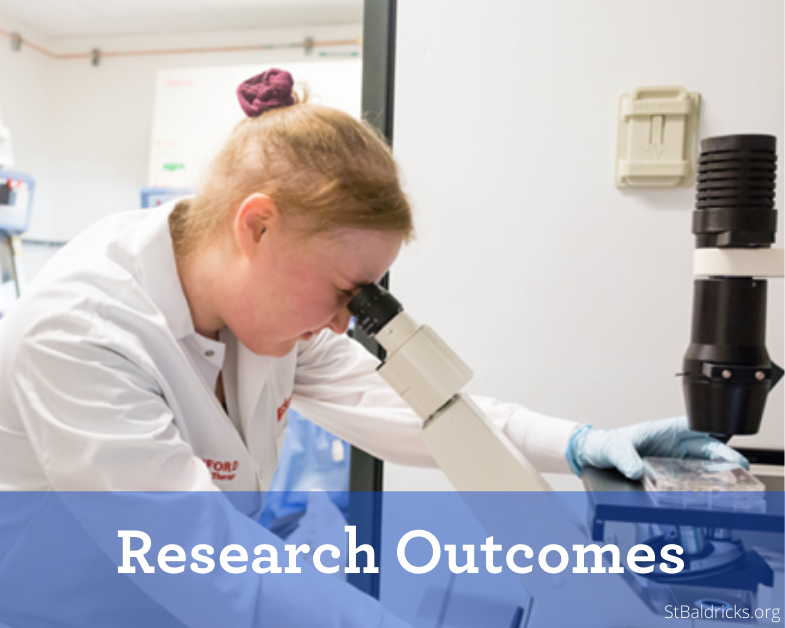 Finding Genetic Clues and a Potential for Targeted Therapy in Rhabdomyosarcoma

The researchers found the presence of mutations in several genes, including TP53, MY0D1 and CDKN2A, which appear to be associated with a more aggressive form of the disease and poorer chance of survival. If doctors can use this knowledge to predict which patients will do well and which won’t, then treatment plans can be personalized for specific patients. The scientists hope that genetic testing will be become part of the standard treatment plan for rare cancers like rhabdomyosarcoma.

Next steps also include research to identify drugs that target these mutations.

Stopping Tumor Spread in Children with Ewing Sarcoma – Before It Starts

A recent discovery in Ewing sarcoma, an aggressive and often fatal childhood cancer, has uncovered the potential to prevent cancer cells from spreading beyond their primary tumor site. The breakthrough provides new insight into what triggers the process that allows cancer cells to survive while traveling throughout the body in the bloodstream. This finding published in Cancer Discovery comes from St. Baldrick’s funded researcher Dr. Poul Sorensen. Dr. Sorensen was the recipient of a St. Baldrick’s grant funded through an anonymous $1 million donation in honor of a special teenager currently fighting Ewing sarcoma.

Improving Event Free Survival for Some Children with AML

According to the study published in the Journal of Clinical Oncology researchers, including St. Baldrick’s Scholar Dr. Jessica Pollard, evaluated patients from a phase 3 Children’s Oncology Group (COG) clinical trial. Patients were randomly assigned to receive standard chemotherapy with the addition of this drug, or standard chemotherapy alone. The findings show that the addition of this drug significantly improved patient quality of life by improving event free survival (EFS), but overall survival (OS) was comparable to standard treatment. The 5-year EFS rate was 48% with the addition of this drug and 29% without it (P =.003). The 5-year OS rate was 63% and 53%, respectively (P =.054).

Additionally, of the AML patients who achieved remission, those that received the drug had lower relapse rates. Researchers believe that consolidating this combination with hematopoietic stem-cell transplantation may further enhance outcomes and they plan to study this next. (In a hematopoietic transplant, stem cells are taken from the patient’s own body or a matched donor and transplanted into the patient to form new blood cells in the body.)