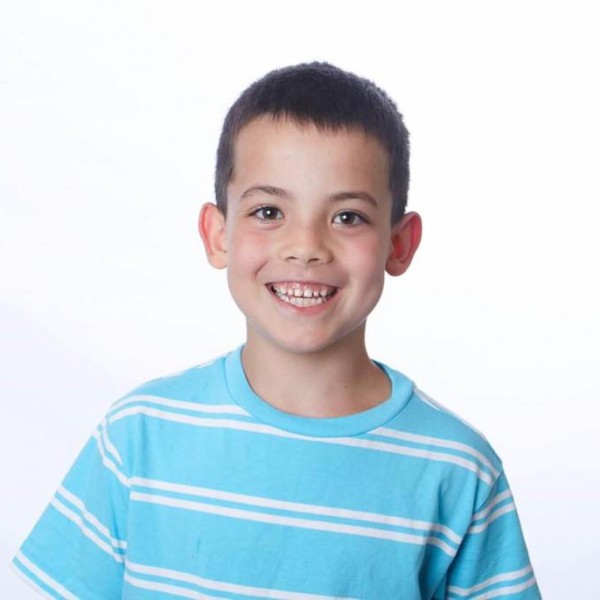 Tweet
Get Involved Donate
Download Donation Form
We have created Dominic’s Hero Fund, to honor our sweet boy and help fund research specifically for High Grade Gliomas such as Glioblastoma and DIPG, for there is no known cure. These types of brain cancers are extremely aggressive with the average prognosis less than a year.
2020
$4,022
Funds Raised in 2020
2019
$71,706
Funds Raised in 2019
$192,301
Total Funds Raised
Since 2016

On March 7th, after noticing some strangeness with Dominic's left side, his mom took him to the Doctor.

He was sent for a CT scan which ultimately led to finding a mass in his brain. He was immediately sent via ambulance down to CHOP (Children’s Hospital of Philadelphia) and on March 9th he had as much of the mass removed as safely possible. However, on March 14th the family was given devastating news: Dominic had a grade 3 tumor that is extremely difficult to treat. There is no known cure and the survival rate is slim for children with this rare type of cancer. He endured radiation and chemotherapy treatments in an effort to help destroy the remaining tumor. After 3 additional surgeries, it was determined in November that Dominic had a grade 4 tumor, otherwise known as Glioblastoma, which has no known cure. Exactly 9 months to the day, on December 7th, our precious Dominic went on to live with Jesus. To read more about Dominic's journey, you can visit our website: www.prayfordominic.com

About Dominic: Dominic was an absolute joy. He loved life, his family, friends and Jesus. He was your typical healthy 7 year old boy who never needed more than a band aid before cancer came into his life. Dominic loved to laugh and to make others laugh with him! For Dominic, Ketchup was a food group! His favorite food was noodles with butter, parmesan cheese and an enormous helping of ketchup. Dominic enjoyed going to see all of the different Philadelphia sports teams in action with his family. Dominic was a really empathetic child. Growing up with a brother paralyzed with Spina Bifida gave him a unique understanding and perspective on how to best help others. He always wanted to make sure everyone was included and was a friend to all. Even when he was his sickest, Dominic found ways to find joy in even the littlest things, like playing a fart piano app on his iPad to make his oncologist laugh. Potty humor was Dominic’s favorite. Dominic was so proud of the many extraordinary Lego sets he built with using only one hand! Legos became his escape from cancer and treatment. Dominic so appreciated the many gifts that were sent to him during his illness. We are creating a nonprofit called Dominic’s Toy Chest and have already had our first collection of toys to bring for CHOP’s Oncology and Radiation patients! We want Dominic’s legacy of bringing joy to others to live on forever.

Dominic’s Hero Fund: Like many people, before I became a cancer mom, I had no idea about the lack of funding for childhood cancer and more specifically high grade gliomas. Did you know that pediatric brain tumors are the leading cause of cancer related death among children and adolescents ages 0-19, surpassing Leukemia? Overall, childhood cancer research is given less than 4% of national funding which covers ALL types childhood cancer. There have only been 3 new drugs developed for pediatric cancer since 1980 and they are all for Leukemia. As a result, the survival rate of childhood leukemia has greatly improved.

We have created Dominic’s Hero Fund to help fund research specifically for High Grade Gliomas such as Glioblastoma and DIPG, for which there is currently no known cure.

These types Brain cancer are extremely aggressive with the average prognosis less than a year. As a result, Doctors don’t have enough time to attack the cancer with multiple different treatments as with other types of cancer. Dominic battled for exactly 9 months, with two separate major tumor resection surgeries. The second surgery bought him only 42 more days of life and that was with trying an adult immunotherapy drug that was granted for compassionate use. We were told that if it were to help, it would take at least six treatments before we would see any possible improvements. Unfortunately due to the aggressive nature of Dominic’s tumor, he was only able to receive two treatments before he lost his battle.

We want other families to have a fighting chance at beating brain cancer and the only way to find a cure is through research. We don’t wish for any other families to go through this horrible nightmare that we are living.

Dominic fought everyday and was willing to do whatever was necessary. We are continuing his fight and hope you will support his hero fund so no child has to hear the words “there is nothing more we can do”. Part of Dominic’s tumor is being used for research right now and his corneas have given back a New Jersey mans sight. Dominic’s legacy WILL continue.

These friends and family members helped us raise funds for childhood cancer research in support of Dominic! See the 2017-2018 list.

Support the Running for Dominic Fundraiser on
April 15th at the Shape Women's 1/2 Marathon.

Join us in increasing awareness of brain cancer on the Pray for Dominic Facebook page.

Donations made to Pray for Dominic have funded a St. Baldrick’s Research Grant for Loic Deleyrolle Ph.D.  Dr. Deleyrolle is researching targeted therapies for brain tumors at the University of Florida.

These people make us smile - they’re the doers and money-raisers on behalf of the Pray for Dominic fund. They’re shaving their heads, hosting events, starting fundraisers and more to make childhood cancer research possible.