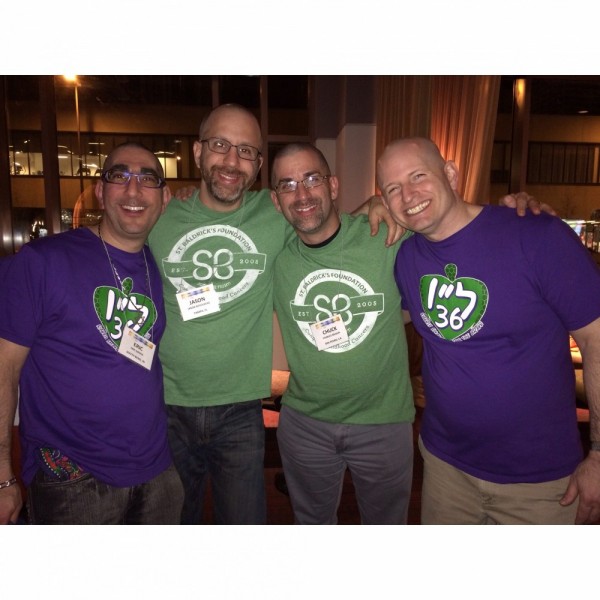 Many, many years ago a fun-loving kid from Connecticut named Michael Sommer met Chuck Briskin at a NEFTY Institute at Camp Eisner in Great Barrington Massachusetts. A couple of years later, Michael became a "mentor" of sorts to a young and up and coming temple youth group kid named Jason Rosenberg. Jason and Michael have remained in touch since then, while Chuck and Michael reconnected many years later at a CCAR convention. If you had asked the NEFTY Regional Advisor Lesley Littman back then if she could've imagined Chuck, Michael and Jason as rabbis. . .G'valt! She would've plotzed! However, 25 years later, they are ordained as rabbis and helping to influence a new generation of Jewish youth. All three of them credit their NEFTY years for helping inspire them to become rabbis. As part of our individual fundraising efforts for 36 Shave for the Brave, Chuck and Jason thought that it would be a good idea to reach out to our NEFTY connections from the late 1980s to the early 1990s to share the story of Michael and Phyllis' son, "Superman Sam" and help raise even more funds for St. Baldricks. Right now, three NEFTY Alumni have signed up to be part of Team NEFTY. Eric Siroka (whose younger brother Eliot was friends with Chuck and Michael) is part of our team. Paul Kipnes, who is much older than us, will be joining shortly. We invite any NEFTY alumni to join our team and help us reach our goal. Below is the standard information from St. Baldricks. We hope our NEFTY friends especially will join us. In the meantime we are looking for NEFTY era photos of any of us, individually or with one another. I guarantee that all of us had much, much more hair in the late 1980s. Send them our way if you have any. If you don't know the sad, brave and powerful story of Superman Sam, as chronicled by his mom and dad, Rabbis Phyllis and Michael Sommer, we encourage you to read their blog; http://supermansamuel.blogspot.com/ You will understand why we are privileged to be counted among the 36 rabbis (and likely many more) who will "Shave for the Brave" at our CCAR convention this March.

We have answered the call to be heroes! We've teamed up to have our heads shaved – to stand in solidarity with kids fighting cancer, but more importantly, to raise money to find cures.

Please support us with a donation to the St. Baldrick's Foundation. This volunteer-driven charity funds more in childhood cancer research grants than any organization except the U.S. government.

Your gift will give hope to infants, children, teens and young adults fighting childhood cancers. So when we ask for your support, we're really asking you to support these kids. Thank you!

Click "Make a donation" to give online, or donate by phone or mail.