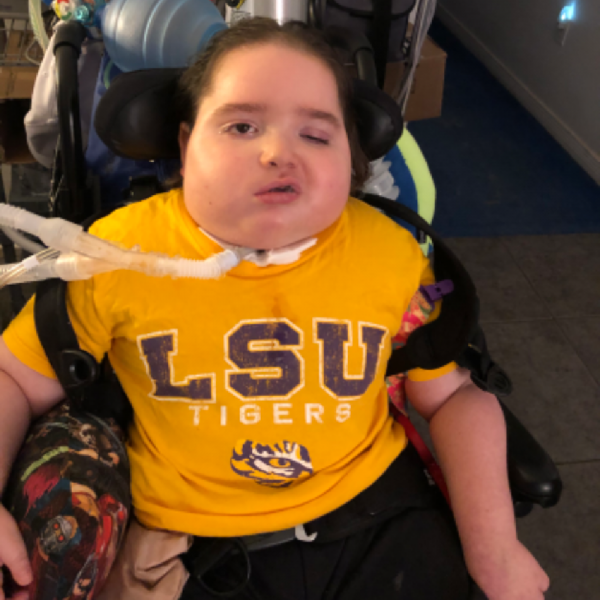 In my story, I explained that my son Albin, aka AJ aka Robot Boy, was NED since 2017. Unfortunately, AJ relapsed in 2019 and the rhabdomyosarcoma in his trachea returned. There are no treatments that will rid him of the cancer at this point. Any chemotherapies we might have considered would extend his life, or more likely do nothing for him, but his quality of life would be very poor. He can no longer receive radiation treatments to his trachea as it would cause irreparable and life-threatening damage to his trachea and esophagus. Any treatments we might have tried would cause him unneeded misery. We have chosen to give him comfort and peace at this time. He has entered palliative care. Our hope is that he is able to remain at home with his family and receive all the love and care he needs to be in the most comfort and least amount of pain until he succumbs to this disease. We will continue to support St. Baldrick's in his honor, and when the time comes, in his memory. This is why I, AJ's mother, shave for St. Baldrick's and try my best to raise as many donations as I can for St. Baldrick's. Their funding for childhood cancer research is critical for our kids, so that better treatments can be discovered and more cures can be developed.

At the age of 2, my son Albin aka AJ, was diagnosed with a malignant brain tumor-PNET. Primitive Neuroectodermal Tumor. It is a rare form of cancer, and occurs in kids and young adults. Most patients diagnosed with PNET are toddlers, as AJ was. The tumor was massive, invasive, inoperable, and placed in a critical location on his brain stem and spinal cord. His prognosis was poor. AJ's chances of survival were around 43%. We, myself (his mother) and AJ, spent 11 months admitted to Children's Hospital New Orleans - March 2012 to February 2013. AJ endured chemotherapy and radiation treatments. The tumor shrunk. The cancer was eliminated, though scar tissue remains on his brain stem and spinal cord where the tumor was. AJ was not only left with scar tissue; he was also left with chronic respiratory failure - meaning he is on a portable vent. He has a tracheostomy, is g-tube fed, suffers seizures, and has spastic quadriplegia. Due to chemo and radiation, he has hypothyroidism, growth hormone deficiency, and adrenal deficiency. AJ suffered a secondary cancer in 2016, at the age of 7. Rhabdomyosarcoma in his trachea. He is currently NED (No Evidence of Disease) after both of his battles with cancer. Illustrating the awful, lifelong ailments of post cancer treatments might make the whole process seem hopeless, but it is not. It is not hopeless because of organizations like St. Baldrick's Foundation that raise funds for better, more effective, less invasive, and less harmful cancer treatments for kids. St. Baldrick's is the top private funder of childhood cancer research. Over 75% of each dollar donated to St. Baldrick's Foundation is used toward actual research. St. Baldrick's awards grants around the globe so that scientists and doctors can work toward more efficient cures, and work toward finding treatments for some childhood cancers that are as of now

untreatable. St. Baldrick's also teamed up with Stand Up to Cancer to fund grants for research into immunotherapy- a promising form of treatment that is less harmful to patients in the short and long term. But St. Baldrick's is 100% volunteer driven and receives money from donations only. This means they rely on volunteers like myself and my team members (Team Robot Boy) and so many other gracious and courageous volunteers to raise donations so that St. Baldrick's Foundation can continue to fund research into better, more effective treatments and cures for childhood cancers. Every dollar counts. Every donation, no matter how small, adds to the whole. Any donation amount is appreciated and accepted with gratitude. Please help us to take childhood back from cancer and give kids a chance to survive, thrive, and live the lives they deserve. Thank you.