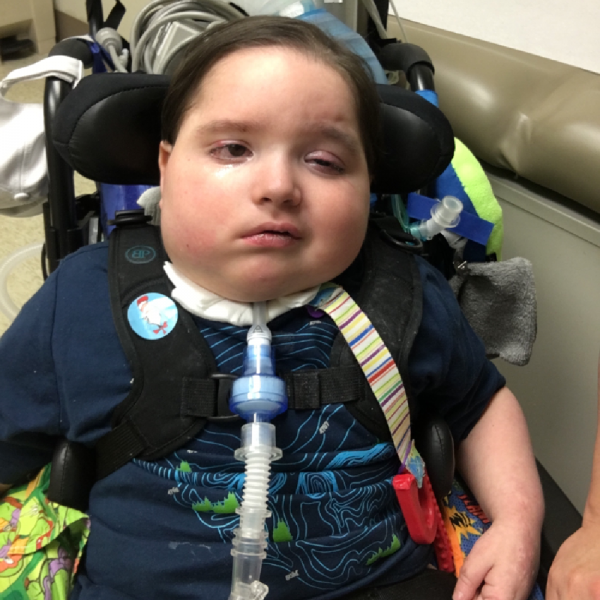 Update: Albin J, aka AJ, passed peacefully surrounded by family on 4-5-22. We, his family, will continue our mission to spread awareness about childhood cancer and help raise live saving funds towards St. Baldrick's childhood cancer research.

Previously AJ was listed as having rhabdomyosarcoma because that was the secondary cancer he was in treatment for and that ultimately took his life, but his initial cancer was PNET brain and spine tumor. I've changed it since his passing to his original cancer diagnosis.

In his story, I explained that Albin, aka AJ aka Robot Boy, has been NED since 2017. Unfortunately, AJ relapsed in 2019 and the rhabdomyosarcoma in his trachea returned. There are no treatments that will rid him of the cancer at this point. Any chemotherapies we might have considered would extend his life, or more likely do nothing for him, but his quality of life would be very poor. He can no longer receive radiation treatments to his trachea as it would cause irreparable and life-threatening damage his trachea and esophagus. Any treatments we might have tried would cause him unneeded misery. We have chosen to give him comfort and peace at this time. He has entered palliative care. Our hope is that he is able to remain at home with his family and receive all the love and care he needs to be in the most comfort and least amount of pain until he succumbs to this disease. We will continue to support St. Baldrick's in his honor, and when the time comes, in his memory. This is why I, AJ's mother, shave for St. Baldrick's and try my best to raise as many donations as I can for St. Baldrick's. Their funding for childhood cancer research is critical for our kids, so that better treatments can be discovered and more cures can be developed.

At the age of 2, Albin aka AJ, was diagnosed with a malignant brain tumor-PNET. Primitive Neuroectodermal Tumor. It is a rare form of cancer, and occurs in kids and young adults. Most patients diagnosed with PNET are toddlers, as AJ was. The tumor was massive, invasive, inoperable, and placed in a critical location on his brain stem and spinal cord. His prognosis was poor. AJ's chances of survival were around 43%. We, myself (his mother) and AJ, spent 11 months admitted to Children's Hospital New Orleans - March 2012 to February 2013. AJ endured chemotherapy and radiation treatments. The tumor shrunk. The cancer was eliminated, though scar tissue remains on his brain stem and spinal cord where the tumor was. AJ was not only left with scar tissue; he was also left with chronic respiratory failure - meaning he is on a portable vent. He has a tracheostomy, is g-tube fed, suffers seizures, and has spastic quadrapaligia. Due to chemo and radiation, he had hypothyroidism, growth hormone deficiency, and adrenal deficiency. AJ suffered a secondary cancer in 2016, at the age of 7. Rhabdomyosarcoma in his trachea. He is currently NED (No Evidence of Disease) after both of his battles with cancer.