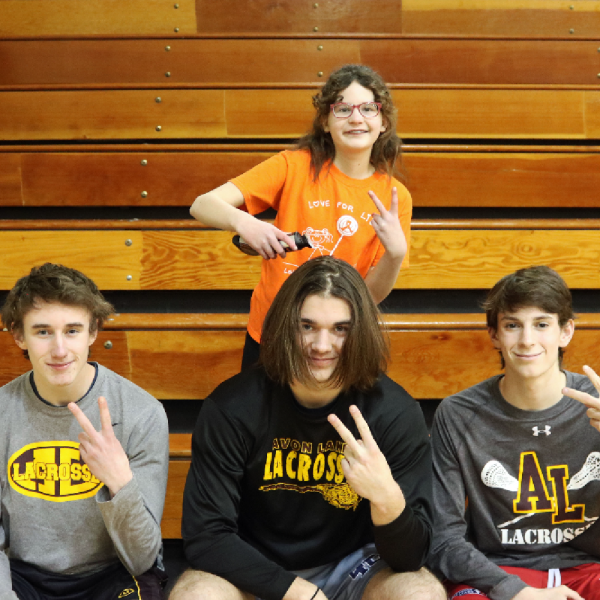 I shaved to raise money for childhood cancer research with: Westhaven Warriors

I shaved to raise money for childhood cancer research with: Westhaven Warriors

St Baldricks is a special event where people of all ages come together and shave their heads to help bring awareness and raise money for children with cancer. A few members of the Avon Lake Lacrosse team want to do their part and get more involved.

AVON Lake is NO stranger to children fighting cancer. Lily Von Glan is a 6th grader at Troy Intermediate school. Lily was diagnosed with Leukemia just a few days Into her 3rd grade year. Unexplained fevers and weakness sent her to Fairview Hospital, after a few blood test she was immediately sent by ambulance to the Cleveland Clinic. Lily was in and out of the hospital usually weeks at a time for the next 2 years. Lily had this beautiful blonde curly hair and when it fell out she was very sad, as any third grade girl would be. Lily was also a strong happy 3rd grader that wasn't going to let this get her down.

Heather, Lily's mom said it takes a village when going through cancer. So many people stepped up and helped in every way you can imagine. Carpool for her 2 other daughter's, dinners and anything else you can think of and they are forever grateful.

It's 4 years later and Lily has been done with treatment for a over a year now and is excited to be a part of the St Baldricks event. Why is she excited? Her excitement brings me to these 3 friends, Joey Carson, John Perry and Zak Kovacs and their own stories about why they are involved with St. BALDRICKS.

Joey is involved because his cousin Courtney who was just 4 years old lost her battle to Leukemia. Joey attended St BALDRICKS to cheer on his friends 4 years ago. In a sea of green balloons, one yellow balloon (Courtney's favorite color) drifted upwards to the sky. At that moment Joey knew what he had to do and he has been shaving his head in memory of his cousin ever since.

John initially got involved 6 years ago with his dad and younger brother to support Shane Hadaad a young boy from Cleveland battling brain cancer the past 8 years. This year he is doing it in memory of Piper Samuels, a sweet 6 year old girl from Avon Lake that lost her battle last summer.

Zak is involved bc of Joey and John. Last year during the event which Zak was attending to cheer on his friends. John and Joey's dad's bet him that if they raised 5,0000.00, would he shave his head too? A handshake happened and here we are, a year later amd no haircuts for Zak, just look At the picture.

Each one of these kids have their own story about cancer but what brings them together? THE VILLAGE. As Lily's mom shared the village is what it takes to get through it sometimes.

Lily will actually be shaving Joey, John and Zaks hair on March 17th and any other person who would like to join these Avon Lake Lacrosse players. The village helps it's own and we couldn't be prouder to be a part of such a great Avon Lake Village.

Please take a moment to donate, any amount will be greatly appreciated. Thank you for reading our stories and for your donation.