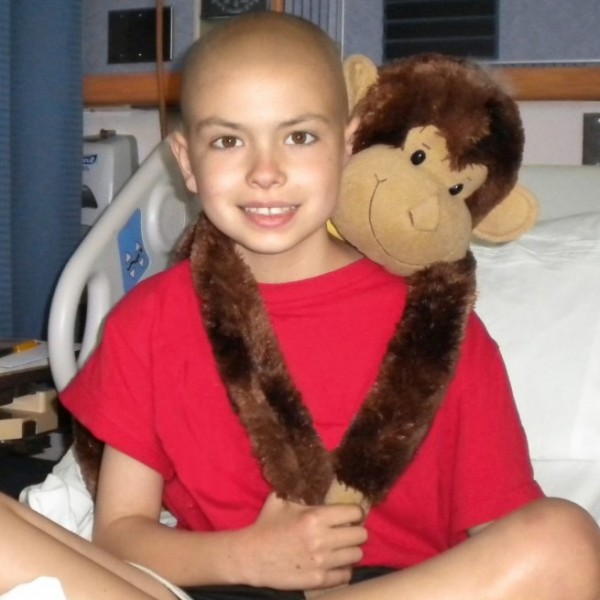 One of five St. Baldrick's Foundation 2012 Ambassador KidsWritten in loving memory, by Jessica and Bill Gerber, mother and father to Teddy. “When I grow up I would like to be a scientist. Two reasons I would like to be one is because I want to cure cancer, I also want to cure mosquito bites. I think being a scientist is important because if someone was very sick I would try to help cure them. I think these things are good about being a scientist; I save lives and help people be less uncomfortable. I think working all day (sometimes night) will be very hard but worth it if I’m going to help people stay healthy.”Teddy wrote that for a homework assignment entitled “What I want to be when I grow up”. He was 8 years old, in third grade. Within a month Teddy was diagnosed, out of the blue, with undifferentiated sarcoma in his chest. He then endured 7 rounds of highly toxic chemotherapy, 2 life-threatening operations and 7 weeks of radiation. The course of Teddy’s treatment was an emotional rollercoaster. He recovered fully from two miraculous operations that removed all visible tumor. We were ecstatic but nervous because of the likelihood that some cancer cells remained behind. Radiation was focused on the area where the tumor had been, so it was up to more chemotherapy to kill other cancer cells in his system. This chemotherapy had not shrunk Teddy’s tumor before, but maybe it would work better on individual cells?It did not. New tumors, in other areas of his chest, were discovered in June – less than a month after he finished treatment. Teddy spent most of June and July in the hospital and was able to briefly come home before a high fever required re-hospitalization. He passed away early on the morning of August 16, at the age of 9 ½, just over 9 months after his initial diagnosis. One of Teddy’s most joyful times during his illness was the St. Baldrick’s event at Osborn Hill School. He was the star, overseeing the first “shavee” of the night (his older brother John), as well as many of his friends. He even took off his hooded sweatshirt (which he wore constantly throughout chemotherapy), because, as he said, “I’m not the only bald person here anymore.” Teddy was very smart, funny, kind, bossy, sweet, stubborn, silly, strong, thoughtful…we could go on for hours. Not a day goes by that we don’t think of him, of everything he went through, and wish he were still here. We miss him so much. Teddy did not die from a lack of care, effort, or resources. From the patient oncology nurses to the tireless surgeons, to the brilliant doctors calibrating proton beam radiation, everyone gave it their best. But in this new age of genetic sequencing and targeted therapies, the bar for what defines ‘our best’ must be raised significantly. In the end, it was a lack of detailed knowledge about Teddy’s cancer that made his oncologists’ options so limited. The best they could do was prescribe standard chemotherapy and hope for the best. At the same time, the chemotherapy made him throw up, lose weight and become weak. It decimated his white blood counts, necessitating daily injections which he, and we, dreaded. It caused him to lose his hair and eyebrows, which made him self-conscious. It made him delirious, requiring other medications beforehand to counteract this effect. It kept him away from school, his friends, his brother and sister.St. Baldrick’s is raising the bar by funding grants that will discover more effective, targeted, lower toxicity cancer treatments so that no child in the future will have to suffer as Teddy did, or have their promising futures stolen. We will work to make that a reality. Teddy, with his wish to become a scientist, would want it that way.