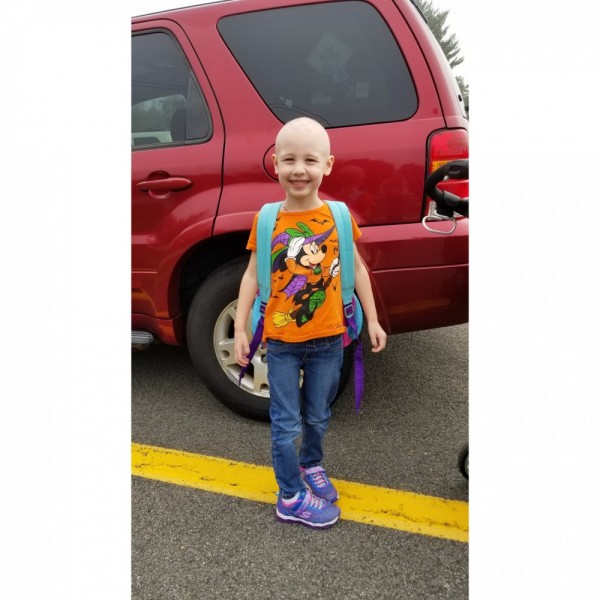 In September 2018, Charlie, five years old at the time, was diagnosed with neuroblastoma. Her original symptoms were fatigue, achy knees, stomach pains, and fever. Her parents being proactive, took her to her primary doctor to be checked out. The doctor thought she had a virus and her aches were related to growing pains. Her mommy insisted on having blood work drawn and the results indicated that her levels were way off. She was sent to AMC for scans. The scans revealed that she had a tumor on her aorta and spots on her chest and neck. In later scans, it was also identified that she had spots in her bone marrow and on her femur. She went through chemo, radiation, two very long surgeries, surgery to have a line put in, immunotherapy, scans every three months, and four rounds of a vaccine for neuroblastoma. She has many inpatient hospital stays at AMC for treatment, fevers, transfusions, and colds. Radiation, surgeries, scans, immunotherapy, and the vaccine required stay in NYC so she could be treated at Memorial Sloan Kettering. In Fall 2019, Charlie started back in school and her and her family were starting to live a “normal” life and get back into their old routines. In December 2019 Charlie stated that she was getting headaches and started vomiting. They visited the ER twice at AMC and both times her symptoms were attributed to viruses and a GI bug. At the beginning of January Charlie had her routine scans. The scans revealed that she had relapsed. She has a spot on her skull base and two spots on her liver. The following weekend after scans Charlie didn’t feel good so her parents took her to AMC ER to be checked out. She was admitted and the following day she lost her vision. Since January she has gone through one round of chemo and ten doses of radiation. She developed a staph infection, has received platelets, had surgery to get a temporary line put in her arm as her permanent line has a slit in it. She still has no vision and had developed fevers. She will be having a biopsy of her liver and another surgery to place her line. She will then receive chemo and will eventually have chemo immunotherapy as well as possible surgery to remove the tumor. She also had her head shaved as she was loosing her hair. Her hair had just grown back. She is truly a Warrior!