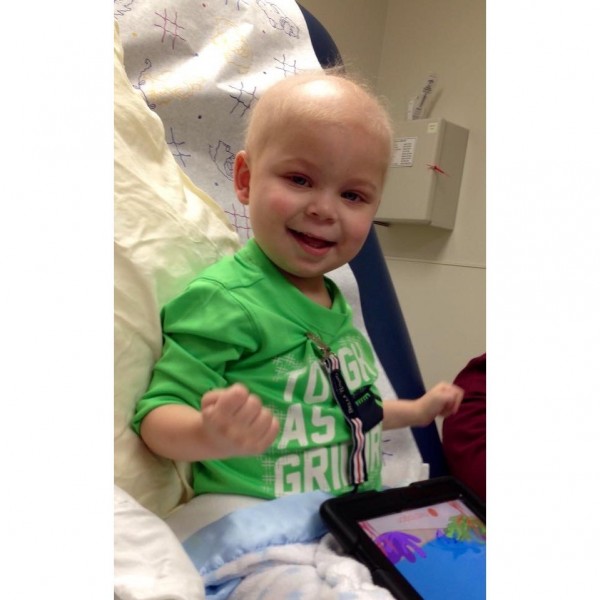 Our Lady of the Lake St. Jude Children's Research Hospital

Luke is a very social, loving, outgoing & independent 2 1/2 year old from Lafayette, La. He had a toddler fracture in his right lower leg in July of 2014 from climbing & falling & landing on his leg. He had a cast for 6 weeks, and 2 weeks before cast was scheduled to come off, he developed fever. He would not walk and was in a lot of pain after the cast came off. 3 doctors, 2 antibiotics, blood test, a few X Rays & and an MRI later we were in Baton Rouge on 9-9-14 for what we thought was a bone abscess. Unfortunately after trying to surgically drain the abscess; they discovered it was not an abscess but one of many bone lesions from Acute Lymphoblastic leukemia (73% of his bone marrow was leukemia) He had no immune system, no white blood cells, was barely making red blood cells & platelets and has had to receive many blood transfusions & platelets along the way. We were sent by ambulance to Memphis, Tennessee to St. Jude Childrens hospital within 4 hours of diagnosis &  began treatment immediately. We Have had a few bumps along the way; readmissions to hospital for fevers, cold virus, blood infection, ICU for respiratory distress, and complications from chemo like mucositis, but Luke Kept on fighting. He had a negative bone marrow biopsy on Halloween 2014 & got to go home for the first time on 11-4-14. We went back & forth from Lafayette, la to Baton Rouge one week and then to Memphis, Tennessee the next week until before Christmas.  We go to OLOL in Baton Rouge every week & just got back from Memphis, TN a week & a half ago. Have to go back to St. Jude in Memphis again in April and May for 3-5 weeks. Luke is learning to walk again and can walk with assistance, but should start physical therapy this week or next to help him build his muscle strength. When not cruising around getting treatment,  Luke hangs out at home with mom and baby sister Caitlyn who was born on 12-24-14(mom was 6 months pregnant when this began)- she wasn't the Christmas present he wanted since he was an only child until she came along. Luke is very social & struggles not being able to be in preschool and around other kids, but his immune system is still low at times & running a fever means a hospital admit for him until maybe later this year. And absolutely no indoor play areas/places either. His strength & courage are amazing and to him the world is just as it was before this began, just a kid trying to be a kid & have fun! Luke has lots of great family & friend support and WE WILL NEVER GIVE UP! Thank you for supporting me and the more than 300,000 kids worldwide who will be diagnosed with cancer this year. By sharing the gifts of your time, talent and money with the St. Baldrick’s Foundation, you're supporting research to give all kids with cancer a better chance for a cure.