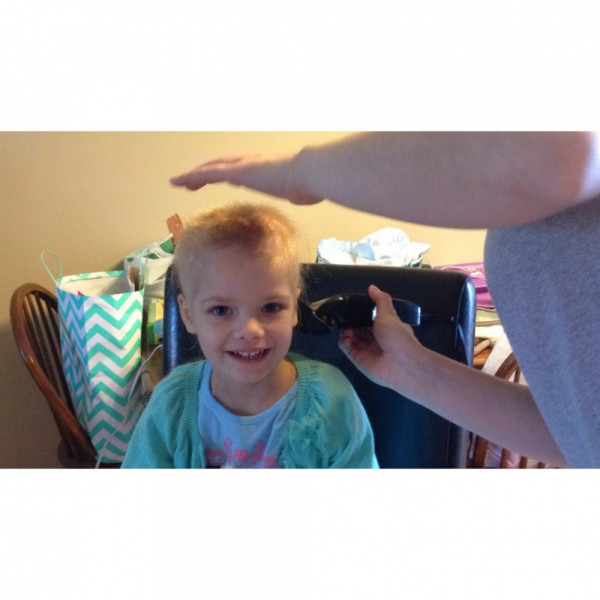 In July of 2014 Kenzie started to experience a lot of leg and hip pain. Within a week she was struggling to walk, was very tired and had a low-grade fever.  When we first took her to the doctor, the PA she saw thought she just had a virus that was affecting her joints.  We took her back in a few days since her symptoms weren’t letting up.  This time they ran some blood tests.   Some of the results were a little puzzling so the plan was to return in a week to see if there were any improvements.  A week went by and nothing changed so Kenzie’s doctor decided to get an x-ray.  Her x-ray was abnormal and Kenzie was then sent for an MRI under anesthesia.  The evening following her MRI our doctor called and told us there were lesions on Kenzie’s pelvis and femurs and our next step would be going to Children’s hospital in Omaha for further testing.  Once there, Kenzie got a CT of her abdomen and pelvis and a bone marrow biopsy. The preliminary results for the bone marrow biopsy was cancer.  It would be a few days before we knew exactly what type of cancer our 3 year old would be fighting.  After five days in the hospital the final pathology results came back and Kenzie was diagnosed with stage IV Neuroblastoma. The next morning Kenzie went to surgery and a dual lumen central line was placed.  Later that day the first of five rounds of chemotherapy started. Each round was completed as an inpatient hospital stay lasting at least one week. After the second round she had her stem cells harvested for a future transplant. On December 16, 2014, a day after her 4th birthday, Kenzie started the stem cell transplant process at University of Nebraska Medical Center in Omaha. Kenzie is currently on her final step in treatment, Immunotherapy.  Scans and a bone marrow biopsy were repeated before she could start this next step. Her CT scan showed a number of small nodules in her lungs. Before we could move forward these nodules needed to be addressed.  Her Doctor decided to wait two weeks and re-scan to see if there was improvement.  The repeat actually looked worse, more nodules and some increased in size.  Next a lung biopsy was performed, requiring another surgery and a couple nights stay in the hospital to recover. Unfortunately the results were inconclusive.  The doctor concluded that compared to her other test results the lung nodules were most likely some sort of mild infection unrelated to her Neuroblastoma.  So on April 24th, 2015 she finally was able to start the immunotherapy treatment. She was tolerating the immunotherapy better than expected. It finished up in October of 2015. Another set of scans and bone marrow biopsy were done, and the results determined what was to follow. The treatments were very difficult for Kenzie. As a 4 year old she didn't completely understand it all. She did know she had “blastoma,” as she called it, and she couldn't do all the same things as her friends. Spending weeks at a time in the hospital hooked up to an IV pole became normal for her. With all that had happened Kenzie remained a happy smiling little girl who was always full life.  She was one amazing kid for sure, when she first lost her hair she told us it was okay because she was a brave strong girl.  Kenzie passed away in November 2017 after a trip to the Happiest Place on Earth, and took half of her mommy and daddy's hearts with her. She will be loved and missed forever.