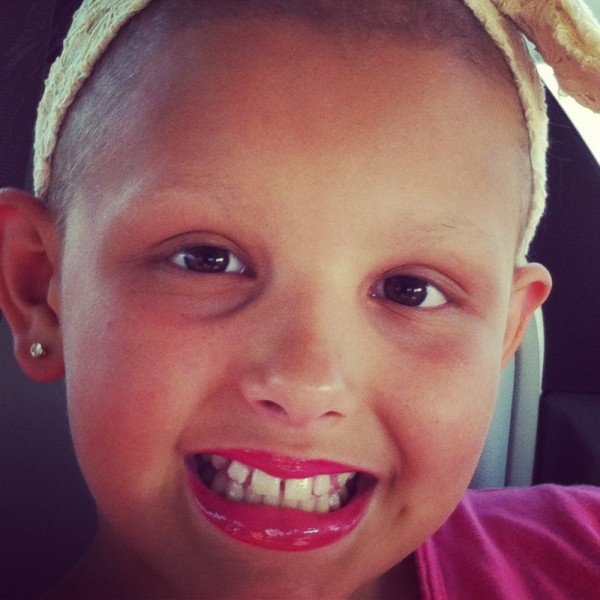 In mid-February I noticed a bump on my daughter Ava’s head. She was 8 at the time. I thought she must have just bumped it playing around with her brother but it never went away. I took Ava to her doctor and she reassured me that it was fine and just a cyst. When I took Ava to the dermatologist, she also said it was a benign cyst. The doctor suggested leaving it alone but my husband and I decided we wanted it removed. Getting the “cyst” removed was supposed to be a simple procedure. While I watched the doctor remove the mass from her head, I could see the doctor struggling. Things didn’t seem right! I saw the doctor pull something out of Ava’s head. The doctor had a confused look. I felt like something was wrong. She pulled out another piece from Ava’s head. At that point, the doctor asked me to leave the room. The entire procedure took three hours. The doctor called me back into the room and said it wasn’t a cyst as she had originally thought. She sent the mass in for testing. We called several times a day, every day. When Ava had her stitches removed we also got her results. Ava and I waited in the waiting room while the doctor talked with Todd (my husband and Ava’s father). We had a bad feeling and we didn’t want Ava in the room to hear the results. I’ll never forget the look on my husband’s face as he walked towards us. He tried to act normal as we drove home. Once we got home we got Ava occupied with something so Todd could share the results with me—Ava had lymphoma. These were the words no parent should hear. I honestly felt like the results were a mistake! Ava was healthy and strong. We started looking around for the best hospital to care for Ava. Todd and I agreed Children’s Hospital Los Angeles was the best for Ava. I called Children’s Hospital Los Angeles and we met with Ilanit Brook, MD, in Children’s Center for Cancer and Blood Diseases, the next day (one day before her ninth birthday). After meeting with Dr. Brook I knew Ava was in good hands. Ava had surgery on Wednesday, March 27, 2013 and they also gave her a small dose of chemotherapy. On Friday, April 5, Ava was admitted for her first full treatment of chemotherapy. Ava was released after a few days. All of us didn’t understand what a cancer patient had to go through to get well again. Ava spent that summer in at the hospital part in patient & out patient. she's had so many blood transfusions, and so many different types of chemotherapy. There were times when she had to get a very high dose of chemotherapy & had to hospitalized for this because it's very risky. Cancer is a very lonely and isolating disease, and Ava is very social. Her friends mean the world to her! She is a strong girl, and full of energy! Spending her summer at the hospital was tough on her and we learned to take one day at a time. Today is January 3, 2014. Ava did it! She completed the majority of her treatment and is currently in maintenance. There were so many times when I thought, “How will Ava get through all of these obstacles?” Ava had so many hospital stays, sickness, surgeries, chemo, losing hair, being in a wheelchair, countless medications and allergic reactions. She didn’t complain and always went along with her treatment plan. Ava still has a year to go. I am so very proud of her! She wants to start a foundation to bring toys & crafts to the kids at her hospital. She can't wait to visit the playroom & teach some of the kids how to rainbow loom. When Ava stayed in the hospital most of the time she was too sick to go to the playroom. That's why she wants to deliver a toy or craft to each kid & say hi.