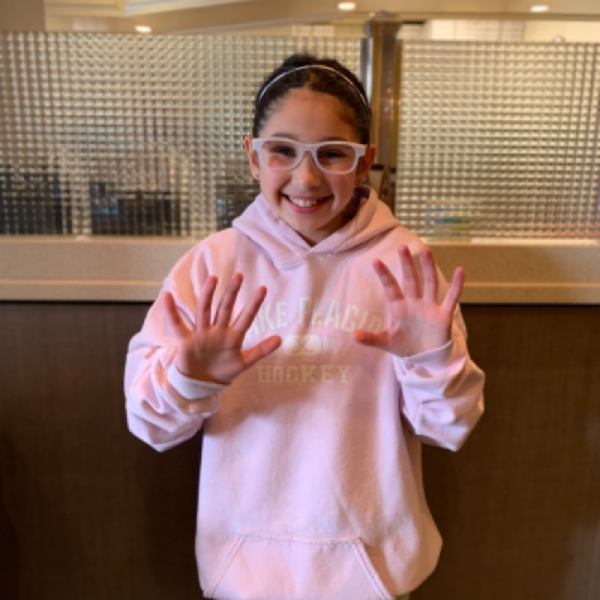 In early 2008 we were blessed with and welcomed our fourth child, a girl we named Gabrielle. We gave her the nickname Elle (pronounced like the letter ‘L’). She was the biggest of the bunch, weighing in at a healthy 8lbs 12ozs and her delivery without incident. While at Elle's two-month checkup, her mother pointed out the fact that one of Elle’s eyes drifted off a bit and that in some of her first photos, a white sheen appeared in the same eye. After careful inspection, the pediatrician thought it wise for Elle to see a pediatric ophthalmologist just to rule out anything suspicious. There was no real sense of urgency or alarm. As fate would have it, a previously scheduled appointment in the pediatric ophthalmologist’s diary was canceled which allowed Elle to see this doctor the same day. After more than one hour of examining our two-month baby girl’s eyes, the doctor referred Elle to a retinal specialist and the sense of urgency and alarm was clear. This next doctor was very clear and deliberate in telling us that Elle had a tumor in the retina of one of her eyes. He and his staff worked quickly with yet another doctor’s staff and the very next day, at 6:30am, we were to be seen by the foremost expert in the field of treating Retinoblastoma. We were headed to Memorial Sloan-Kettering Cancer Center (MSKCC). Our daughter had cancer. Elle visited MSKCC (and other hospitals) every four weeks - sometimes more frequently - for her regimen of chemotherapy, blood count check-ups, and eye exams - not all of this coordinated on the same day or at the same hospital. We worked with three main doctors, all experts in their respective fields. Elle was subjected to chemotherapy in the forms of the common administration through IV (known as systemic), and direct administration into her affected eye, which required surgery (known as intra-arterial), laser treatments and cryotherapy in an attempt to eradicate the tumor. As with any cancer patient undergoing chemotherapy, her blood count became extremely important. It was monitored on a monthly basis for indications of abnormalities and trends in the negative direction. Her young body didn’t tolerate the chemotherapy drugs very well. More than once we were asked to perform twice daily injections of a hormone (G-CFS) to stimulate the growth of neutrophil when Elle was considered neutropenic, a condition characterized by an abnormally low number of neutrophils. She was hospitalized during the summer when the abs neutrophil component of her blood registered a zero count, meaning that her body had nothing to fight off infections. These visits continued for nearly her first year of life. Elle was asked to endure a lot at such a young (or any) age. We are so thankful for all of the support we have received during this difficult time. We are truly indebted to the all of the medical professionals who attended to Elle. Gabrielle recently celebrated her 11th birthday. Since January 12 and the writing of this, she is cancer- free. She shows no effects of the treatments that she was given and she is reaching all of her expected milestones. She is every bit of a athletic, playful, smart, talkative and rambunctious little girl ... and we wouldn't have it any other way!