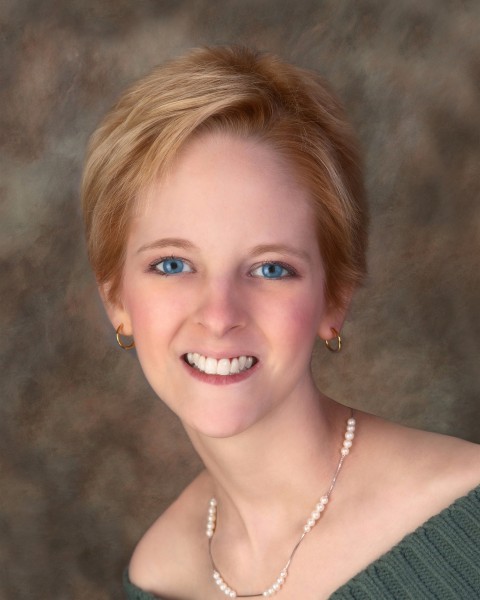 Rebecca Josey Simpson May 8, 1989 ' February 23, 2007 'Because we knew her, we have been changed for good.' At the end of September last year, Rebecca was behaving in much the same way as any 17 year old girl. She was rehearsing for the role of 'Meg' in her high school production of Little Women, attending a choir retreat for her high school choir, giggling with her girlfriends about boys, and preparing to go to New York City for a trip with her senior class. Unlike most of the other girls her age, though, she was doing all of this while fighting Acute Myelogenous Leukemia in its third relapse. Rebecca was diagnosed with AML on March 11, 2003 at the age of 13. For the next four years, she underwent multiple, progressively more intense rounds of chemotherapy, approximately 12 in all, to beat back the aggressive disease. She received untold quantities of blood, platelets and plasma to merely stay alive. She spent countless hours in the clinic waiting room, and weeks at a time in the hospital. She contracted fungal pneumonia from a common airborne fungus which healthy immune systems readily destroy, but which attacked her lungs with a vengeance, requiring two lung surgeries within months of each other and resulting ultimately in the removal of the lower half of her left lung. She received a bone marrow transplant donated by an amazing man named Ben Tempel from Minnesota, and afterward she spent 100 days isolated from her friends and pets, waiting for the new bone marrow to graft into her body. She underwent extensive, never-ending treatment for graft-versus-host disease, and the drugs eventually killed the bones in her hips and shoulders. The death of the bones caused her severe and constant pain which limited her movements, and she awaited the day that she was well enough to have a double hip replacement. She declined rapidly in the four weeks before her death as the leukemia took over her body with a vengeance, until she passed away on February 23, 2007 in her own bed at home, holding her sister's hand. But anyone who spoke or interacted with Rebecca, or even just observed her, would never have believed that such a young, slight girl was undergoing so much physical suffering. Rebecca refused to behave as anyone other than your typical teenager and displayed a remarkable capacity for joy and compassion. She tacked a sign to her hospital door a-la Lucy from The Peanuts ' 'The Doctor Is In' ' and dispensed advice to any who asked, including doctors, nurses, frightened patients, and worried families new to the world of childhood cancer. She learned to do wheelies in wheelchairs and created a makeshift water-gun out of syringes with which to attack the particularly playful Dr. Gold. She went to the mall with friends wearing a mask to protect her from germs. She joked with them about their boyfriends, and provided a shoulder to cry on and an ear to listen when they were having relationship troubles. She pursued her interests with all the energy she possessed. She auditioned for plays and musicals at school, sometimes performing bald and with oxygen tanks waiting in the wings. She sang in the choir and Honors Vocal Ensemble missing half a lung, and played the piano despite losing the feeling in her fingers due to certain drugs. She took advanced academic classes, kept up with the work and graduated early as Salutatorian of her class regardless of having missed half of each school year due to treatments. She volunteered her time at blood drives and fundraisers for childhood cancer, sharing her story with any who would listen, desperately hoping to make a difference. She made friends with the DJs for 94.7 WQDR and 96.1 Rock, joking and talking with them for 18 straight hours each year at the UNC-Children's Radiothon while sharing her story with thousands of listeners over the air. She danced with her dance company while enduring the pain of bone deterioration, often doing ballet when she could barely walk. She kept an online journal that originally was a medical update page, but which ultimately developed into a forum for her to share her ideas and beliefs, to encourage and lift up those around her. www.caringbridge.org/nc/rebecca Rebecca approached life with an unbelievable attitude in one so young faced with so much constant pain and disappointment. She exhibited joy, compassion, and determination every moment of her life. The day before she died, when asked what she wanted the preacher to talk about at her memorial service, she replied that he should tell the congregation to 'Always rejoice in the Lord, no matter what. Always have faith in Him no matter what. And never give up on the dream that God has given you, no matter what. Just because it's over here, doesn't mean it's over there.' Her goal, her dream, was to make a difference in the lives of others. If she had only known the impact she is having on people she has never met, people who will one day hear the story of a young girl who pushed her disease aside in order to live every moment of her life joyfully. No matter what. She would realize that it's not over here, not at all.