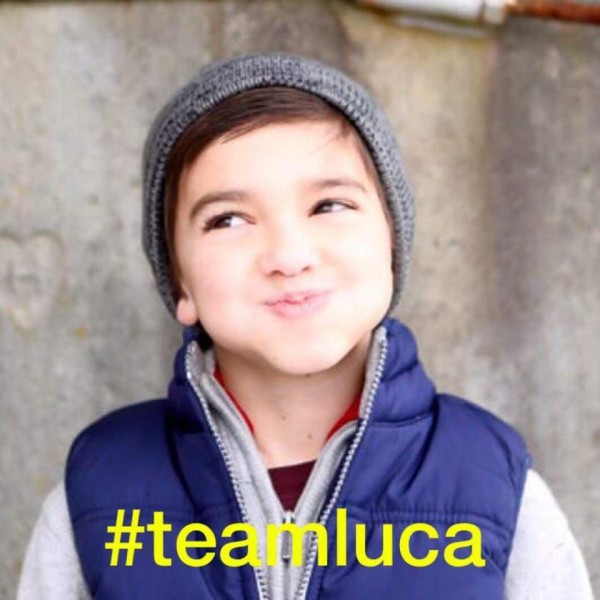 Luca's story... Luca was 15 months old when he was diagnosed with ependymoblastoma (ETANTR), a very rare, incredibly aggressive brain tumor. He was admitted to CHOP from the ER after doctors found a mass in his brain. He had surgery the following morning to remove the tumor and alleviate the pressure on the brain from severe hydrocephalus.  The surgery was just the beginning of a very long, difficult journey. Luca's cancer carried a grim prognosis of 0-30% 5 year survival, with the best case being reached with complete cranial spinal radiation as part of the treatment (an option not available to Luca due to his young age.) Instead, doctors opted for a plan of 3 rounds of induction chemotherapy, 3 rounds of high dose, consolidation chemotherapy with stem cell transplant, followed by proton beam therapy. During the course of treatment, Luca had hundreds of shots, countless minor surgeries, many bloodstream infections, lost his hair, lost weight and the ability to walk, was poked, prodded and poisoned...all in an effort to cure him.In February of 2009, in preparation for proton beam therapy in Boston, Massachusetts an MRI was completed and showed the cancer had returned. Three months shy of his 2nd birthday, Luca's prognosis grew worse. The cancer was deemed incurable and he no longer qualified for proton beam therapy. Instead, doctors suggested they could buy some time with an excruciating surgery that would send him back to infancy - unable to walk, talk, sit up, rollover - even focus or hold up his head, followed by 6 weeks of focal radiation to the area of the tumor. Luca's family and friends continued to pray for a miracle for Luca and continued to hope that one day Luca would recover and be cancer free.Luca completed his last day of radiation one day before his 2nd birthday. Over the next 6 years, Luca's family and friends watched with great joy as he learned to walk, talk, jump, play, go to school, build Legos, play video games and t-ball. Seeing his beaming smile is seeing a true miracle!In January 2016, despite looking and feeling like his fabulous self, the results of his routine yearly scan showed that the cancer returned to his brain. Luca's family and friends were devastated and heartbroken at the very thought of facing cancer again. In true fighter fashion, when Luca heard the news, he said, "it's ok, they'll take it out, I can do it."The next step for Luca was yet another craniatomy to remove the tumor.  The 7 hour surgery was a success and the post surgical MRI showed gross total resection.  Two days later the pathology results came in and surprised everyone - this was not tumor growth, but brain necrosis.  While necrosis carries it's own risks and we face new fears and unknowns we are ecstatic that the cancer is not back and that Luca can now focus on recovering from surgery and the many late effects he faces.  We will keep a close watch on him and manage and navigate any hurdles we encounter together.  Ultimately we wish to provide him the best most fulfilling life possible and help make his dreams come true. Fight on, smile on.