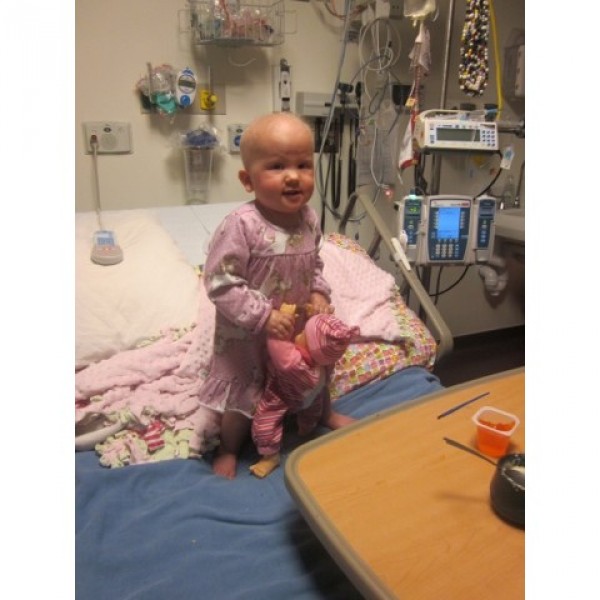 Piper Jean Needham was born July 7, 2009. She was beautiful, healthy, and a fabulous complement to her older sister, Linley. Our little family felt blessed and complete. Ten weeks later, Piper began to run low grade fevers. Her diaper rash was not responding to the typical ointments and her appetite dropped. Because Piper had been a good sleeper, a few sleepless nights sent us to her pediatrician for a checkup. We fully expected to be given a prescription for something simple and be home for dinner that last innocent Tuesday. Little did we know how vastly our life was going to be changed. Piper’s pediatrician sent us to the local hospital to rule out the rotavirus and influenza. I remember being told that though her platelets were low, her white blood count was normal so "this couldn’t be cancer." It was a thought that had never even crossed my mind. Sadly, the very next day her pediatrician came into the room and told me that Piper’s blood work came back with leukemic blast cells. An ambulance was on its way to transport Piper from our hometown of Athens to Children’s Healthcare of Atlanta at Scottish Rite. In room 197, within the oncology/hematology unit, the doctors and nurses began to descend. Over the next 24 hours we were told that Piper did indeed have acute lymphoblastic leukemia. At 10 weeks old, she was considered high risk and subsequent chromosomal testing showed her leukemia to be particularly aggressive. After 48 hours she had her CVL placed, and then the chemotherapy began. Family and friends visited, we learned how to manage an IV pole, we bonded with our nurses and Piper worked her way into remission before being discharged shortly after Thanksgiving, a total of 9 weeks there. Our normal had shifted in a ridiculous way and we were doing our best to shift with it. Since that discharge, Piper had spent over 200 nights in the hospital. Treatment was primarily inpatient, often with high doses of medicine laden with side effects. She temporarily lost her voice due to vincristine, suffered severe burns due to 3 rounds of a high dose of methotrexate, and after a year of monthly dexamethasome steroids she has lost a large percentage of marrow in her left knee. Piper’s hair had fallen out and regrown three times. Even the maintenance portion of Piper’s protocol was busy as she contracted a virus called cytomegalovirus, which left her inpatient for five weeks. Later, she spent 3 weeks in the rehabilitation unit to regain her ability to use the muscles that had suffered severely. Three months later, another ER visit and another admission, and our family was told that Dr. Bergsagel had chosen to end her protocol two months early; she was simply too fragile to handle more. After spending one month off treatment, we found out that Piper has relapsed.