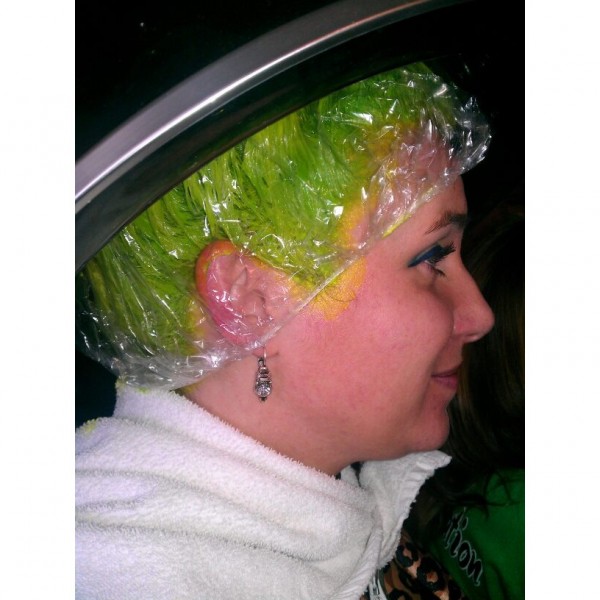 While Morgan was in treatment in 2013, her family was asked if she would be willing to be an honored child for St. Baldrick's. Morgan's mom Melissa had already done her research on the research and really loved what St. Baldrick's was doing to lead the way in the industry. So of course the family agreed and they started a team too! Mom and Dad were planning on shaving their heads too. Dad Scott had already been sporting a bald head prior to Morgan's diagnosis, but had promised Morgan he would let his grow until Morgan's grew back. Luckily, for the whole family, and everybody who had to look at Scott's unkempt hair, Morgan allowed him to end that promise early to participate! It was difficult for Morgan to allow her Mom to shave her head because she was afraid it would make her think of Mom being sick, so they made a deal. If Mom, or the team raised a certain amount of money Mom had to die her hair blonde... and that wasn't all! When they got to the next level, it was to go LIME GREEN because that was Morgan's favorite color. After that they had to reach ANOTHER goal for Mom to be able to shave that green hair off! AND THEY DID IT- ALL! First year 2013 participation recap: ~43 team members prior to the event ~ People who were barbers and shavees ~SO many people coming to support and surround Morgan's family with love and support ~Countless spontaneous day of shaves to include and entire police SWAT team that were friends of friends showing up to shave. ~Mom raised $4,053 ~The team raised $21,761!!!! ~The event raised over $78,000