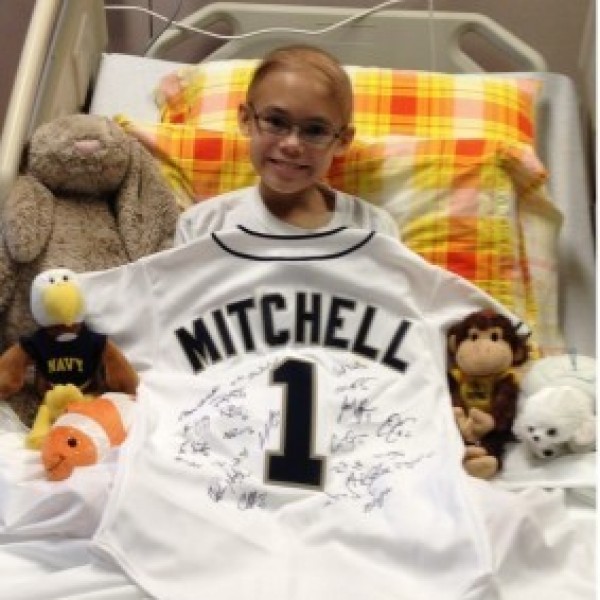 Inspiring! Amazing! Magnificent! The superlatives surrounding Mitchell and all kids with cancer are endless! Mitchell's journey toward recovery began with the first obvious symptoms on 27 December 2013 while on the last day of a ski trip.  he had a severe headache followed by vomiting.  Within one week, he had two more episodes, with the third resulting in a trip to the emergency room on 3 January 2014. Result - Brain Tumor.  Devastating is the word that is used, probably, by all parents in that situation.  Indeed it was for Mitchell's parents.  Mitchell cried a bit, but not too much as he didn't really understand.  Neither did dad, for that matter.  The plan was for surgery to remove the tumor five days later, which resulted in a full resection. Over the next 10 months, Mitchell endured 33 days of Proton Therapy (boy were we lucky that Mitchell was able to get Proton Therapy at one of the eight locations in the United States at that time which was less than 10 miles from home!)  He then began six months of chemotherapy which ended in October 2014.  Again, think of those superlatives.  The way he endured that treatment was incredible! For the next two years Mitchell was in remission and undergoing MRIs every three months to ensure no recurrence of the tumor.  If you saw him, you would have only known that he is a kid who has undergone such a difficult time by the baseball size bald spot on his head.  The area where he had focused radiation still has not, and probably will not, sprouted new hair.  That's ok with him.  Except for constant rubbing of an itchy head, he doesn't care one iota for the bald spot! While he had to stop competing in Taekwondo sparring (he was a national champion in 2012), he has moved on to tennis and has completed two years of lessons and competition.  He also has been learning to shoot competitively in Olympic style shooting! Mitchell, at first didn't want to get the attention to his condition, but as soon as we explained that he could help other kids by raising money to find a cure, he hasn't looked back.  On Mitchell's behalf, we all thank you for your support and your donations to this great charity!  it is also your support to Mitchell. January 2017 Update: Mitchell continues to be in remission.  His two years since the completion of treatment came and went with an 'all clear' MRI in November 2016.  As a reward, he was placed on a protocol of brain MRI's every four months instead of three months.  Mitchell is happy with that. He is now in sixth grade which comes with a lot of HOMEWORK...Yuck.  However, Mitchell is incredibly busy with other activities as well.  Not only is he still working hard at becoming a tennis player and shooting occasionally, he has really advanced in his percussion successfully auditioning for District Band making chair 8 out of 8.  One of the youngest this year to audition in any instrument.  He will participate in the District II concert on 4 February 2017.  While he was told he has to avoid sports that include head contact (hence tennis and shooting), he is still allowed to ski during family vacations twice a year.  He loves to go fast!  At school he is in the band which meets twice a week, and he is learning to jazz dance.  Also, he is on the bird watching and drawing clubs.  At home, he spends a lot of time on his Legos, DS and iPAD as well as the computer playing games with his brother!  Oh, and he loves to sword fight and shoot you with his Nerf guns! We have just under three years to go to get to the five-year milestone that will proclaim him 'cancer free'.  We are so excited by every minute spent with this wonderful boy (almost teenager - can you believe it).  He certainly is living life to its fullest!   Mitchell really appreciates all the support he has received and appreciates your donations to this great charity.  Thank you so much!