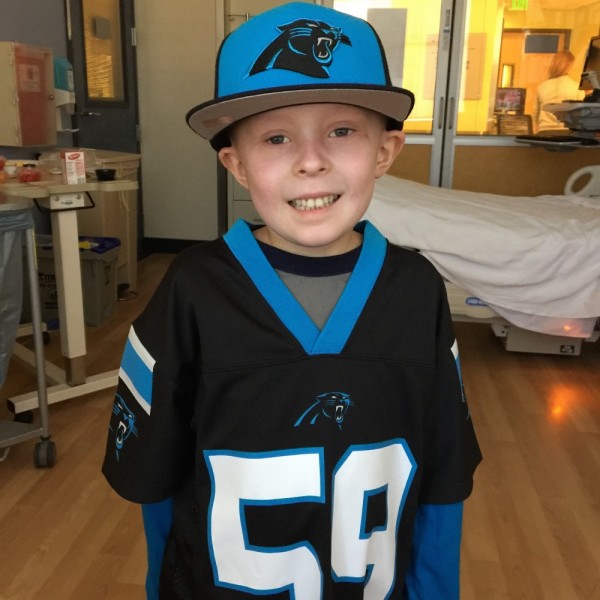 Wesley Payton was diagnosed with AML on April 14th, 2015, he was 6. His WBC count was 350,000 at diagnosis. He was very ill and had been battling very high fevers for over two weeks. 2 weeks to the date later his baby brother was born. About 2 days after having Wyatt we learned that Wesley's leukemia was not just the standard AML case but had a few very bad mutations. His full diagnosis is AML FLT3-ITD w/a NUP98-NSD1 fusion mutation.  He underwent the standard high dose induction therapy for AML and that didn't touch his cancer. He was still at 47% so they tried it again only to get the same result of 47%. They switched up the high dose chemotherapy and added a ITD inhibitor (a chemotherapy pill) to the fight. After round 3 of high dose chemotherapy his BMA was around 25% so finally something had worked! The talks of transplant started again and we had both of his brothers blood tested. They tested the cord we had banked from Wesley’s brand new baby brother. It was not a match. They then tested Ethan, Wesley’s 3 year old brother. After about a 2 week wait we finally got the news back that Ethan was a perfect 100% HLA match! Now, we just needed to get Wesley as close to remission as we could. After round 4 of high dose chemotherapy Wesley's BMA was around 10% so we headed to Children's Hospital Los Angeles from Las Vegas. LV does not have a children's hospital so you can not do any sort of transplant there.  We moved our family into the Ronald McDonald House. Wesley had his Bone Marrow Transplant September 25, 205 @ 10:30am. After 9 sessions of TBI radiation (with no sedation ) and a 24 hour continual chemotherapy drip we were praying!! See the consolation for transplant we had was a 2 hour meeting about how there were no statistics on cases like Wesley.  Basically there was no scientific evidence that the transplant would work. It was 2 hours of hearing he has a below 10% chance of living over and over again.  Since Wesley  never made it into remission from chemotherapy he is considered "refractory" or chemotherapy resistant.  Wesley did amazing during transplant and after batting side effects of it we learned that he had reached remission! MRD negative and FLT3 negative! Wesley  was released from the hospital on October 29, 2015 only 13 days after his 7th birthday! He battled GVHD for the next few months with a handful of two week stays in the hospital. We were able to come home to LV the week before Christmas. We had weekly appointments back in LA that we would take him to. February 22, 2016 at his weekly BMT clinic visit we found out that he had relapsed. We weren't given much hope at all and were even offered the compassionate care option. Since Wesley was still battling from GVHD he did not qualify for any clinical trials. We chose to continue fighting and started him back on chemotherapy. That round of chemo took its toll on Wesleys body and it made his ability to walk a struggle. After that first round we chose to do the rest of treatment back home in Las Vegas. Wesley showed MRD negative for a few months. We were in the process of getting him set up for a second transplant. This time his Dad would be the donor. Wesley had signed the papers to consent to the transplant himself in July of 2016. On July 24th 2016 his Dad headed down to Los Angeles to begin the donation of his stem cells. That same day later in the day I ended up taking Wesley into the ER. He did not look or feel good and had developed a fever. His O2 levels were low and we were admitted. That admission started Wesley’s last ever few weeks left on this Earth. We tried to get him transferred to CHLA’s ICU but they didn’t have a bed. We waited a few days but knew he needed to get out of LV where they were diagnosing his incorrectly we felt. He was life flighted to Primary Children’s Hospital in Salt Lake City. It was during this time that we discovered we were correct and that Las Vegas was misdiagnosing Wesley. We learned that Wesley’s cancer had returned and that he had a mass/tumor in his lungs. Wesley was intubated and hooked up to a million machines but was still awake and coloring and watching movies. John and I sat down with Wesley and had the frank discussion about the findings. We answered every question he would write down about Heaven. The options were have a big party at the hospital and then go be with Jesus or fly to CHLA where he had FDA approval for a certain chemotherapy treatment. We let Wesley decide and he decided that he wanted to fly to CHLA and try the new chemo. We told him that it most likely wouldn’t work and that meant more medicine and more pokes but he was very adamant he wanted to go to CHLA. Wesley was life flighted to LA. It was at CHLA a few days after getting there that we learned Wesley’s cancer was not only back but had morphed into a secondary cancer as well. So he was now battling 2 cancers. We knew that information for 13 hours before on  August 11, 2016, Wesley passed away at 1:45am peacefully in his sleep, surrounded by his family. He is now free of cancer and can run and play. I know he was received by a multitude of angels.