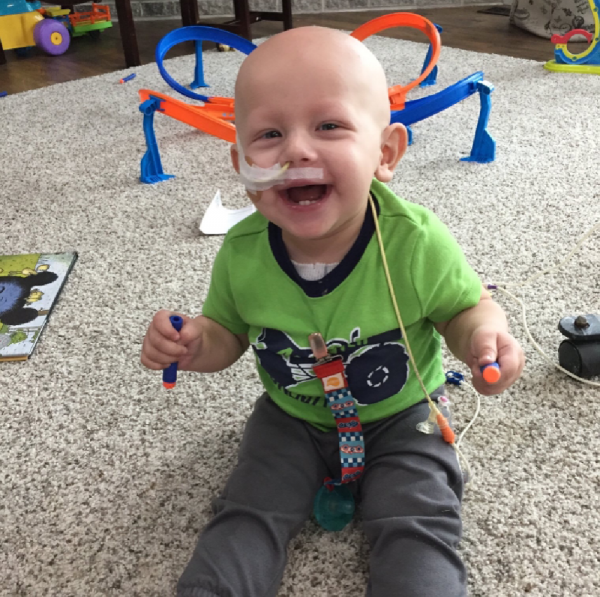 At 9 months old, what started off as a hospital stay with Corona virus, pneumonia, a pleural effusion, and a really expensive helicopter ride quickly escalated to a day that forever changed Wade's life and ours. A CT scan revealed a mass in his abdomen and a mass on his left lung. On January 14, 2018, Wade was diagnosed with High Risk Neuroblastoma, Stage M. That same day he started his first of 7 rounds of chemotherapy at Cincinnati Children's Hospital. Early March 2018, they harvested his stem cells which would later be used in TWO autologous stem cell transplants - one in July and one late August. In May, Wade underwent surgery to remove the primary adrenal tumor in his abdomen and secondary tumor in his left lung. He tolerated all of these treatments like a champ of course! The last week of October, Wade began proton radiation therapy on his left lung and abdomen. He completed 18 of 20 days of proton therapy, but not without struggles. He was fussy, having fevers, and not tolerating his feeds. It was as if we had seen this before? Just before Thanksgiving, the MIBG scan revealed just that. The Neuroblastoma was back, and with a vengeance. Eleven months into the fight, on December 1, 2018, cancer upgraded Wade to Angel status. Because of prayer, science, research, and the incredible staff at Cincinnati Children's Hospital, we were able to spend an extra, very special 11 months with Wade. We learned that he is mesmerized by the movie SING! with other favorites Moana and Cars 3 (basically Tow Mater). We learned he loved bubbles, race cars, tractors, to play ball, and yell "Maaaaa" (for Mom). We learned his twin big brothers could brighten his day no matter how bad he was feeling. Wade's smile left an impression on every person it shined on. Thank you for supporting Wade and the more than 300,000 kids worldwide who will be diagnosed with cancer this year. By sharing the gifts of your time, talent and money with the St. Baldrick's Foundation, you're supporting research to give all kids with cancer a better chance for a cure.