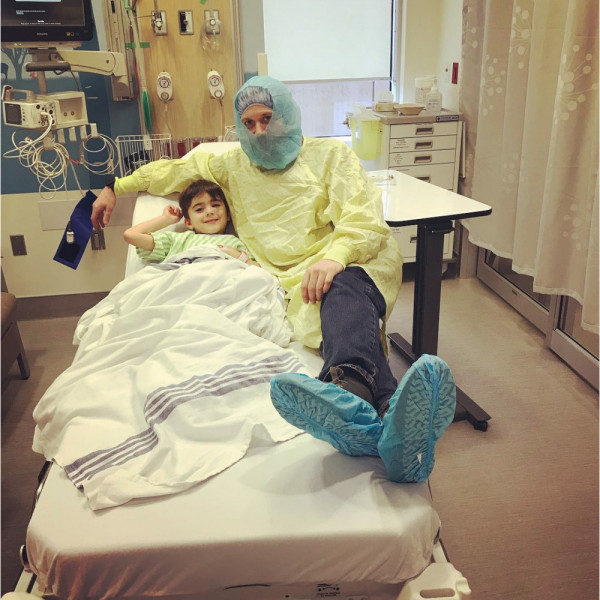 Six-year-old boys need to run and play. They need to jump and sing and build Lego structures. They need to climb trees and build forts. They need to build blanket tents and get their fingernails dirty. Most of all, little boys need love. They need to know they are not alone. “Nico. I’m not going to leave you. I will be with you through this whole thing, just like Jesus is. You won’t be alone.” Last October, a small bump on little Nico’s face started to worry his mom and dad, Nick and Mary Coursey. When it started to grow quickly, his doctor became concerned and on December 21, little Nico had surgery to remove what the medical team thought was a cyst. While Nico was being settled into the post-op area, the doctor broke the news to his parents, “This wasn’t just a cyst. It’s cancer.” While little Nico slowly woke up from surgery, his parents had to put on a brave face. They weren’t going home that day, and they had more questions than answers. Mary, in her third trimester with a baby girl, Nick, and three-year-old Vaughn were suddenly thrown into a world of hospitals, gowns, IV’s, blood draws, and scans. Imagine all the intensity of cancer treatment through the eyes of a six-year-old. More poking. More treatments. Feeling sick. Doctors. Nurses waking you up to take vitals. “I don’t want to… Can we just go home?” was a question all too familiar to Nick & Mary. Nick has been working at a Christian high school in Canada. It’s beautiful but remote. The medical facilities they need are in Vancouver, almost four hours away. Nico has been receiving excellent care at BC Children’s Hospital. During Nico’s prescribed 42 weeks of chemotherapy, 6 weeks of radiation, and possibly another surgery on the way, they can’t just go home. Nico has Rhabdomyosarcoma, a rare and aggressive form of cancer on his left cheek. After certain chemo treatments, smells drive Nico crazy, and he feels awful. This is where Nico needs you. A little boy of 6 – who should be climbing into his momma and papa’s bed when he’s not feeling well – is living the nightmare of cancer. Nico needs some people to stand together with his family – first in prayer and then financially to make sure Nico gets the best care and his papa and momma can be with him -- worry free about finances. Nico has gotten very brave with medical stuff. But this process would be terrible for anyone, let alone a 6-year-old. This last week, facing another procedure, Papa again made that promise, “I’ll always be here with you through all this…” (just like Jesus). Here is where you can help. Together, we need to make sure that Nick is always there to hold Nico and give him love. With 42+ weeks of treatments away from home, Nick’s work situation is currently limited and he has not been able to work. Nick is on a temporary work visa and isn’t able to just work anywhere. Unfortunately, he isn’t able to work remotely for his current position and commuting for work during all of this is not possible. While Canada has government medical insurance, there will still be medical expenses. Nick and Mary will need to cover their medical and supplemental insurance premiums, gas, and food, along with the regular stuff like car insurance. Not to mention there will be a baby in the mix very soon! Every gift is another little love note to Nico and his whole family. Right now, Nico isn’t getting to do all the things that little boys should do. But, because of you, he will get the most important thing… Love.