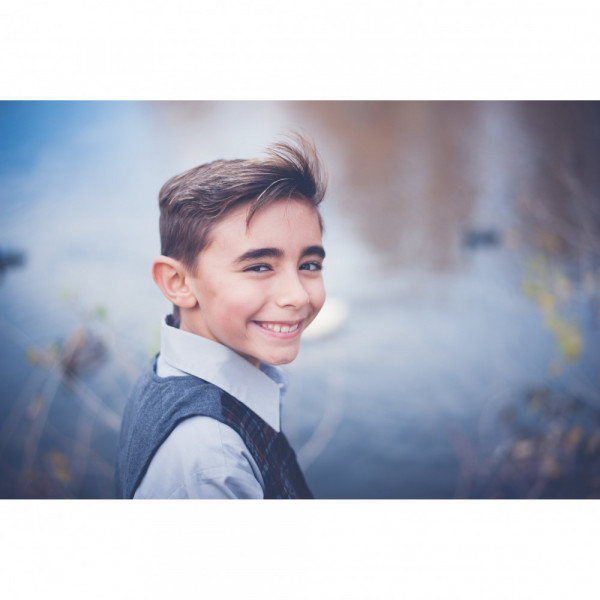 Thank you for supporting me and the more than 300,000 kids worldwide who will be diagnosed with cancer this year. By sharing the gifts of your time, talent and money with the St. Baldrick’s Foundation, you're supporting research to give all kids with cancer a better chance for a cure.   Michael Manteris was the most kind and loving boy you would ever meet. He was caring and compassionate and his smile alone would light up any room. He had a special bond with everybody, he made everyone feel so special. Michael had been healthy his whole life but had developed what we thought were colds and viruses more than usual over the summer. We took him to the Dr. several times and we're told that he had developed allergies and that he had a few viruses. The other symptoms were what we thought were normal preteen behaviors. Michael was very tired and had headaches and would feel nauseous frequently. Again, the Dr's thought it was allergies so we didn't think we needed to worry until Michael looked extremely pale and lost all energy. We took him to his Dr again and requested blood work, within an hour of leaving his apt the Dr office called and said to take him to the emergency room immediately that his blood counts were extremely low. Michael Manteris was diagnosed on October 3rd 2016 with AML Leukemia (Acute Myeloid Leukemia) with secondary MDS and FLT3 ITD. On Michael's 12th Birthday he was admitted to Childrens Hospital Los Angeles to undergo treatment. He moved from Las Vegas to Los Angeles, leaving his little sister and home. Michael never asked "why him" he never complained. He did everything he had to do to get better and kept an extremely positive attitude through what was the most terrifying experience to ever happen to him or to anybody. Michael underwent two rounds of chemo therapy and miraculously was in remission. He still needed to have a bone marrow transplant to ensure the Cancer did not come back. Before the transplant he received another round of chemo to completely knock out all of his own remaining cells so his new marrow can start engraftment. One week after Michael's transplant he was taken to the PICU due to liver complications. He developed severe VOD and was placed on continuous dialysis. Then his kidneys started failing. After 6 weeks in the ICU on dialysis Michael was improving and was released from the PICU and taken to the BMT floor to continue recovery. After only 5 days he was struggling for more oxygen and was admitted back to the ICU. The chemo therapy destroyed his lungs so badly that ultimately he developed several lung infections and was placed on ECMO (life support). After 21 days on ECMO Michael's Dr's told his parent's that there was nothing more they could do for him, his lungs were too badly damaged and could not recover. Michael took his last breaths in the arms of his parents and little sister Bella after an unfair 5 month battle with Cancer on March 30th 2017. Childhood cancer took the life of an innocent angel from his family. Michael loved life and had the most infectious, beautiful smile. He is with Our Father in Heaven and no longer in pain. He is happy and will always be his family's Guardian Angel. Michael's family lovingly called him "Michael Bear" and will forever keep his legacy alive. You can learn more about Michael at teammichaelbear.com or use the hashtag #teammichaelbear to see more of Michaels story. Michael Nicholas ManterisOctober 18th 2004- March 30th 201712 yrs old. AML Leukemia with Secondary MDS and FLT3 ITD