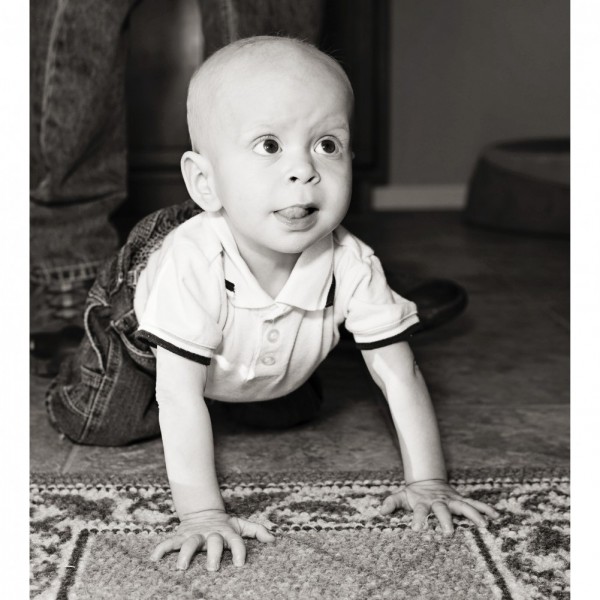 In November 2014, we took Jackson, then 11 months old, into the doctor over concerns that his once cute little belly had grown rapidly.   Jackson showed no signs of being sick or in pain and we tried telling ourselves that we were probably overreacting.  A day after our appointment with our family doctor, we heard the words that no parent ever expects to hear, "I'm sorry, Jackson has a tumor".  We were sent immediately to Children's Hospital Colorado and consulted with the amazing doctors and nurses in the Center for Cancer and Blood Disorders. In the long days that followed, our sweet boy endured a lung biopsy, CT Scan, PET Scan, MRI and central line placement.  The scans revealed that in addition to a large abdominal tumor, the cancer had spread to his lungs as well.  The primary tumor, because of it's large size, was considered inoperable. It wasn't until the biopsy results were back that we were given even harder news.  Not only did Jackson have cancer but his particular type of tumor is called a Rhabdoid Tumor, a very rare, highly aggressive form of pediatric cancer.  We were told that Jackson had a very low chance of surviving the disease. After taking a few moments to process what we had been told, we decided to take the only option available to us - fight!  Jackson then began a year long course of aggressive chemotherapy.  Through it all, Jackson has displayed incredible strength and resilience.  The support and comfort given to us by the staff at Childrens Hospital Colorado has been incredible.  We consider ourselves blessed to have such skilled medical professionals so close by. In January 2015, we received our first positive news since our diagnosis:  the chemotherapy appeared to be working.  In February 2015, Jackson underwent surgery to remove the tumor from his abdomen. He has made an amazing recovery from surgery and grows stronger every day.   To the amazing network of family, friends, coworkers, doctors, nurses and even total strangers - Thank You!  You are all part of "Team Jackson" and it is because of you that we have the strength to fight on! Update:  07-23-2015As is so often the case with Rhabdoid rumors, Jackson's cancer returned In the Spring of 2015 and became resistant to treatment.  After a heroic fight, our sweet boy took his place with the Angels, surrounded by his loving family.