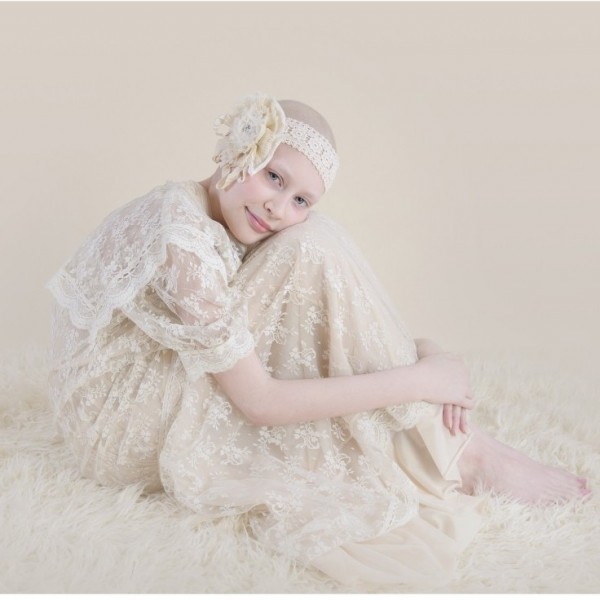 Sydney was your typical active and playful 11-year-old girl. On August 29, 2014, we noticed a small lump on the side of her neck. She had no other symptoms. We spent the next 7 weeks taking her to doctors, being told that it was just a swollen lymph node, which are very common in  kids her age. She was mis-diagnosed several times (once being cat scratch fever) and took 2 rounds of antibiotics, only to have the lump continue to grow larger, and still no accompanying symptoms.
Finally, on October 20, 2014, after insisting that someone examine her further, we took her to an ENT, who ordered a CT Scan immediately. He called us with the results of the scan the same day. He referred us to a Head & Neck Surgeon at MD Anderson the following morning. She was then sent for a biopsy on October 23, which confirmed that it was Lymphoma. On October 24, 2014, Sydney was diagnosed with Stage IV Burkitt's Lymphoma. Her treatment began immediately, since Burkitt's Lymphoma is humanity’s fastest growing cancer and is capable of doubling every 24 hours.
From October 2014 to June 2015, Sydney received 9 rounds of chemotherapy treatments, made 5 trips to the ER (3 ambulance rides) and numerous blood and platelet transfusions at MD Anderson Children’s Cancer Hospital. Since the start of her treatment, she and at least one of her parents has spent 123 days in the hospital, leaving behind her sisters - Gianna, who is now 8 and Bella Grace, who is now 5, and her baby brother, Gabe, who was just 5 months old at the time and is now almost 3 years old.  In February of 2016, we welcomed another addition to our family, Xavier Mark, who is now 14 months old.
Because Sydney's cancer was so aggressive, her chemo treatments had to be just as aggressive, sometimes killing her immune system for over 10 days. The good news is that all of her scans since her treatment began have revealed no evidence of disease. She is now in remission and back to enjoying life to it’s absolute fullest.
Unfortunately, we have come to know many families along our journey who have not had the same results. Many have lost their children to this dreadful disease and we hear about more pediatric deaths all the time.
We had incredible prayer support from the very beginning, which is what helped get us through some of our toughest moments. We give all the glory to God for Sydney’s healing and minimal side effects. Our hope and prayer is that Sydney’s journey will somehow inspire others to remain strong and faithful in their times of trial, like she has tried to do. We also hope and pray that, through your financial support of St. Baldrick’s, more pediatric cancer research can be funded, so that one day, all children with cancer will have a better chance for a cure.