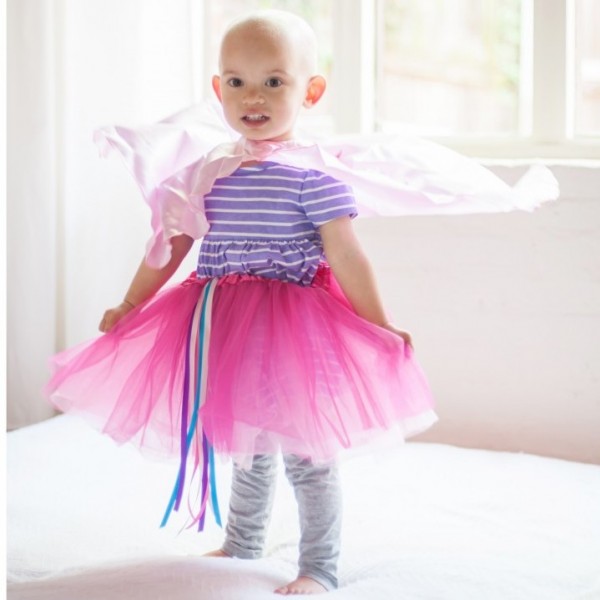 Dear Friends and Family, You know me by my everyday name, Maeve, but my true identity is Super Maeve. I fought something that only one-in-a-million kids have; since I’m a one-in-a-million, superhero kind of girl, I kicked cancer’s butt! Here’s the way you can follow my path to victory! Maeve's Story: While playing on the playground in March 2013, Maeve took a bad tumble and later began complaining of terrible abdominal pain. While her pediatrician was unable to find any apparent cause and thought it might be an unrelated stomach virus, she decided to send Maeve for further tests just to be safe. Through scans it was discovered that Maeve had several tumors in her tiny body: a large sacrococcygeal mass, masses near and within her liver and several spots on her lungs. The doctors’ initial diagnosis was a rare form of Germ Cell Tumor (a malignant recurrence of an sacrococcygeal teratoma she had removed at 3 months old) with metastasis to the liver and lungs. This was confirmed by biopsy on Tuesday, March 26, 2013 and Maeve began her first round of inpatient chemotherapy that same day. Maeve’s initial treatment plan included four five-day rounds of inpatient chemotherapy followed by surgery at CHOP to remove the primary tumor. The pathology from her surgery revealed that most of that tumor had turned to scar tissue (Go Super Maeve!), however they did find microscopic cancerous cells. Because the cancer was still in her liver and lymph nodes, her oncologist, after consulting with oncology heads across the nation, decided to take her off the standard of treatment. Maeve began three new chemo drugs for rounds five, six and seven. After her seventh round of chemo, scans showed the five remaining liver lesions had not shrunk, and we decided to take Maeve back to CHOP for a partial liver resection. Her recovery from liver surgery was very difficult, but on September 23, 2013, we received the most incredible news- the liver pathology showed no evidence of viable disease remained! Maeve was unexpectedly in REMISSION! She had her mediport removed and began the monitoring phase of her journey which includes MRI and CT scans every 3 months and monthly blood draws to monitor her AFP levels. We have been blessed with positive results and while we are aware that the cancer could come back at any time, we continue to pray daily for her continued remission. Thank you for supporting me and the more than 300,000 kids worldwide who will be diagnosed with cancer this year. By sharing the gifts of your time, talent and money with the St. Baldrick’s Foundation, you're supporting research to give all kids with cancer a better chance for a cure.