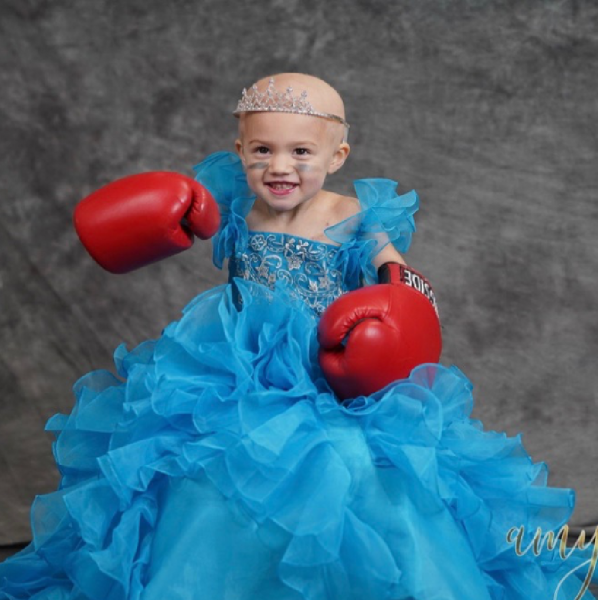 In the summer of 2018, Rosalie’s parents noticed a strange blood vessel in her abdomen and a slight hardness below her belly button. They brought her in to the local children’s after hours care and there they discovered a large unknown mass. They were quickly transferred to Golisano, the local children’s hospital, and spent a week there. The surgeons were able to remove the whole mass and they left the hospital with a diagnosis. Embryonal Rhabdomyosarcoma.

Rosalie fought bravely for 42 weeks of intense chemotherapy. She rarely faltered and had hardly any side effects from treatment. She was just another toddler but with a bald head and a port. She proudly rang the survival bell with her family by her side on May 7th, 2019. A month later she had her port removed and her family moved on.

After a fairly normal and fun summer, Rosalie had her first rounds of off treatment scans. Her first diagnosis was considered low risk, so they opted for just an ultrasound and chest X-ray to avoid having to do any anesthesia time. It was on these scans that her family received the worst news: the cancer was back.

Within a week Rosalie had an MRI, CT Scan and surgery scheduled. The cancer had only come back in its original location so they needed to act fast before it spread elsewhere. The skilled surgeons we’re able to remove about 80% of the tumor and place a port for her to receive chemotherapy through. She is currently 3 months from the end of her treatment and has only a week left of intense photon radiation therapy.

Treatment this time around has not been pretty. Rosalie has been plagued with mouth sores, nausea, bone pain, fevers, etc. The side effects have been so severe recently that she had to have an NG feeding tube placed in order to receive enough nutrients to continue growing and get her through to the end.

Our girl is a tough, brave fighter and we thank you for supporting children like her in their fights. Childhood Cancers receive just 4% of the national budget for cancer research, yet childhood cancers act entirely different from adult cancers. There are 43 children a DAY diagnosed with some form of childhood cancer. We stand with all of them.