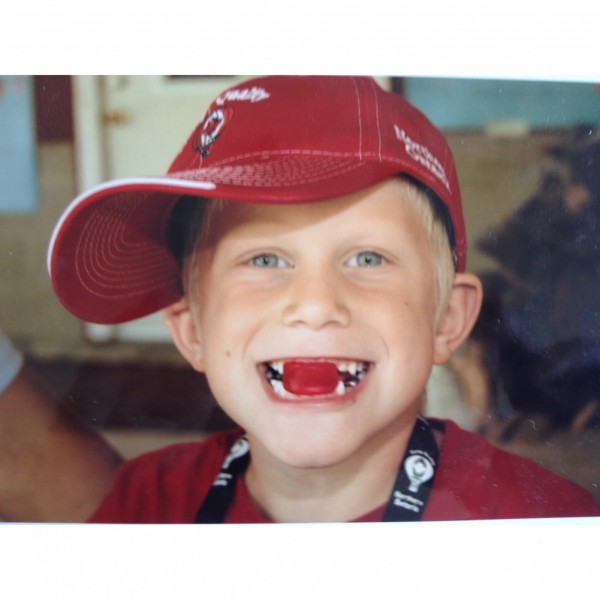 Thank you for supporting me and the more than 300,000 kids worldwide who will be diagnosed with cancer this year. By sharing the gifts of your time, talent and money with the St. Baldrick’s Foundation, you're supporting research to give all kids with cancer a better chance for a cure. So little, so innocent and so unfair. This incredibly horrible debilitating disease robbed my brave, strong, courageous little boy of his innocence and childhood. In the fall of 2010 Racer began complaining of a sore neck, being a young active boy and having a 10 month older brother, Rydar Brason, I brushed it off thinking "Boys will be boys" figuring that he had just pulled a muscle wrestling with his brother or something. However it persisted for about a week so With the help of family we decided to research on the internet what this might be, the conclusion was that maybe he had menengitis, I booked him an appointment with his doctor for the very next day. The doctors prognosis was just a simple viral infection and prescribed us some antibiotic medication and we were sent home, He was still very active and it didn't seem to really bother him too much so I figured with the medication it wouldn't be long before he was ok. Racers neck pain grew and he began vomiting daily. I then took him down to our local hospital and they did x-rays on his neck to try and determine if they could figure anything out that way. The doctor on call looked at the images and didn't like the look of them so she forwarded them on to a radiologist in Sault Ste. Marie. In the mean time we were sent back home to await any news.Word came back from the sault and we received the call to go back to the local hospital and to try and not move racer too much on the way, that he may have a broken neck. They fitted him with a neck brace and we were now on our way to the sault hospital. I was scared but relieved to think that we had answers now and my baby won't have to suffer anymore. At the hospital the paediatrician on call was amazing and very thourogh. He ruled out any family history and also informed us that racers neck was not broken. He ordered an MRI for a week later and also prescribed some medication for racers vomiting and sent us home. We were now back at square one again. At home the vomiting continued nightly and the medication he was on wasn't helping any. Within that week he began vomiting, starting just sparatically. Within a few days my poor baby was throwing up constantly and was fevered, again I related this to him having an infection and just as any normal mother I tried whatever to make him feel comfortable. However it kept on persisting to the point that he now was scrunching his shoulders to his ears almost and had no flexion or movement of his head or neck. I couldn't watch my baby suffer anymore and decided it was time to yet again bring him back in and make sure something was done. They ended up admitting racer while he awaited his MRI date, the doctors wanted to observe him as well. During his first night he was at it again with the vomiting. We met with a doctor who essentially didn't have an explanation for racers vomiting and symptoms. He suggested to myself that this maybe be something psychological..!!? My baby was 4 years old at the time and this wasn't the answer I was going to accept. I pushed for the MRI to be sooner and was hoping for the test to come back with nothing. I was ultimately assured this would be the case as well. In October of 2010 our families lives changed forever. My youngest son Racer Brason (4 and a half at the time) was diagnosed with a brain stem/spinal cord tumour (brain stem glioma) That very day, that very moment was the worst possible day a mother could ever endure.i will never forget when that pediatrician came walking down the hall and asked me if he could speak with me somewhere private, I knew then that this wasn't going to be good news. I broke down physically, mentally and emotionally and had a hard time proceeding what was happening. Within two hours we were being flown down to Toronto sick kids hospital and awaiting news on what was going to happen next. We got all settled into his room and met with the neurologist. We were told that Racer had to undergo an 8 hour intense surgery to release the fluid from his cystic tumour and that it was a risky operation as they had to access into his brain stem. I had to sign waivers that said he could ultimately pass away during this surgery or end up with major complications with speech, breathing, mobility..etc I was dyeing inside but knew I had to hold it together and be strong for my little boy. We spent the following days doing tests and iv's.