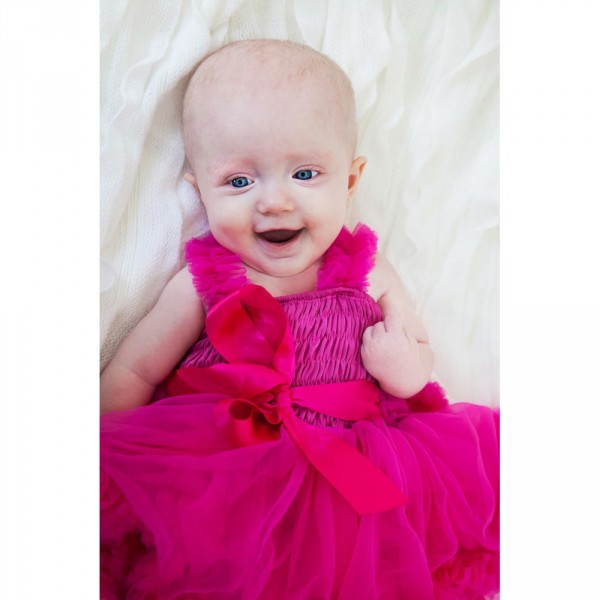 Friday, August 21, 2015 our four month old daughter, Kaelyn, became very lethargic and started throwing up. Mommy checked her temperature, gave her gas drops, tried different, formulas, etc., nothing helped. This continued into the next day, when Kaelyn had an especially bad vomiting and choking episode. Mommy took her to an ER and told the ER staff and doctors what had been happening, as well as what had occurred at Kaelyn's four month well visit. At that visit, they received a referral for an opthamologist because Kaelyn didn't want to look left. As well as a referral for a craniofacial specialist because of the lumps that had formed on her head days before this appointment. Kaelyn was able to see the eye doctor that week, and he said her eyes were healthy. However, the earliest appointment available for the craniofacial specialist was September 16th. The ER Doctor said she was fine, that it was just gas, and sent Mommy home. The next morning she was worse, so Mommy called Cook Children's, a local children’s hospital, and based on everything she told them, they said to bring Kaelyn in within an hour. Based on the same medical history Mommy had given the other hospital 12 hours earlier, the first thing they ordered was a CT. Within an hour the results were back — Kaelyn had a mass in her brain that was 4cm by 3cm by 2cm. She hydrocephalus, which was most likely causing pressure, and therefore, the vomiting. Her head had also grown 3cm in the past two weeks (it was 94th percentile at her four month well visit). They admitted her to the hospital and scheduled her for surgery first thing the following morning. On August 24, 2015 an 11-hour surgery was performed to remove the tumor. On September 1st we got the diagnosis of Choroid Plexus Carcinoma, an extremely rare cancerous brain tumor. Due to the rarity of the tumor, and that it was an atypical tumor, they sent a sample off to Dr. Burger of John Hopkins. The oncology team also informed us of a clinical trial — SJYC07 at St. Jude Children's Research Hospital for a handful of cancerous brain tumors. A sample of her tumor was sent to St. Jude's and they confirmed that her tumor was indeed a CPC. She was accepted to the trial and Mommy and Daddy packed up their lives in Texas and headed to Memphis, Tennessee. After a rigorous week at St. Jude's, she began chemotherapy on September 16th. www.facebook.com/prayersforkaelynhazelwood