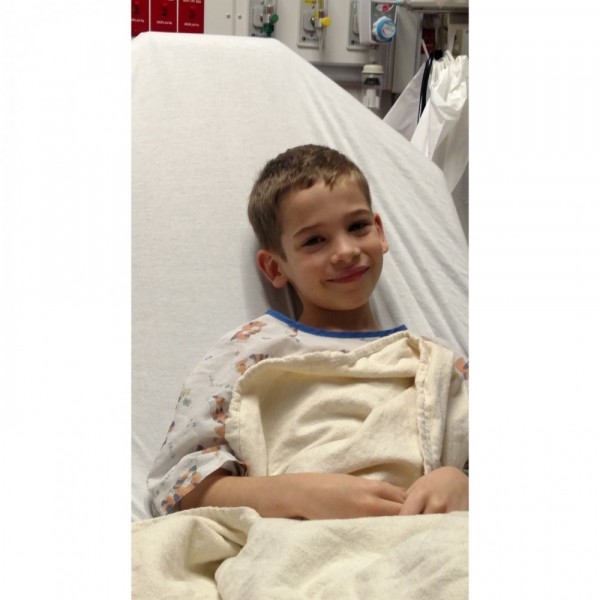 Meet Paxton Elkins lived to be 8 years old. He has a twin brother named Landon, an older brother named Trenton, and two adoring parents – Chris and Krista. Paxton loved to build things, play with oars and make his family laugh – they called him their little comedian. At one of the family's last photo sessions together, Paxton had everyone smiling as they made some great memories at one of their favorite places – the beach. Looking at the images of this sweet family of five you would never know they were dealing with the uncertainty of what lies ahead for their son Paxton. Paxton had Diffuse Intrinsic Pontine Glioma (DIPG), a highly aggressive and difficult to treat brain tumor found at the base of the brain. It all started the last week of school in June 2016. Krista had noticed her son’s eyes would cross when he turned his head and then straighten back out. She did a couple of tests with Paxton at home and when she noticed his left eye wouldn’t turn outward she grew concerned. She made an appointment with the eye doctor on June 21. The doctor said his vision was good but he did have double vision when he turned left. They thought it was Sixth Nerve Palsy, a disorder associated with dysfunction of cranial nerve, which causes an eye to turn out and could cause the double vision. But to err on the side of caution, the doctor decided to dilate Paxton’s eyes because they thought it could also be a tumor. The next day, Paxton was scheduled for a cat scan, but before they could make it to that appointment they received the news no parent ever wants to hear. The eye doctor said Paxton did have a tumor and we needed to get him an MRI so they could learn more. Paxton went in for the MRI, a 2 ½ hour long procedure. When it was done, doctors shared the results and told them Paxton had DIPG. He had a tumor that was 3cm big in the central nervous system of the brain. DIPG is extremely rare and is most common in elementary school-aged children, but it can affect children of any age. Currently, there is no effective treatment. The tumor can’t be removed surgically because the tumor cells are all intermixed with the normal cells in the brainstem that are so crucial for functions like breathing. Radiation to the tumor is the only therapy that has been proven to shrink these tumors and let kids with DIPG live longer, but even radiation cannot make the tumor go away permanently. Research shows nearly all DIPG patients die within two years of diagnosis. In August, Paxton started his radiation treatment and then in September went back for another MRI to see how the radiation was working. What the family found out was completely unexpected. The MRI showed Paxton’s tumor shrunk 90%. It became a waiting game for the Elkins family, living on prayer and hope. Only 3% with DIPG have beat the odds and live longer than a year from diagnosis, and Paxton became a part of that 3% on October 15th 2016, nearly 16 months post diagnosis. His family will love and miss him forever. And if you want to help the family a go fund me page has been created: https://gofundme.com/paxtonelkins