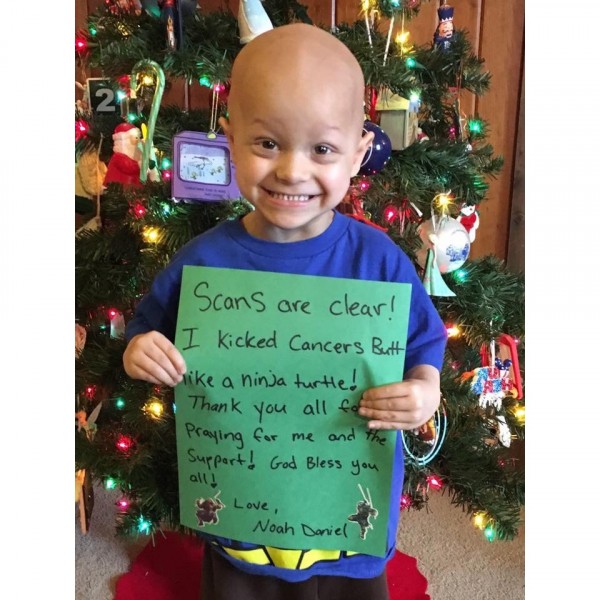 In April of 2015, our family's life chwanged forever. Noah was diagnosed with a massive Stage IV Wilm's Tumor that had metastasized to his lungs. After repeated visits to the pediatrician with no answers, we decided to take him to the children's emergency room at Upstate University Hospital in Syracuse, NY. With the doctor's initial exam, she knew exactly what it was and only a few tests were needed to confirm her diagnosis.  Within a few hours, he was a new resident at Golisano's Children's Hospital cancer floor.  Teams of doctors met with us throughout the day. We were told at that point he was inoperable and chemo needed to be started immediately to shrink the tumor so that they could operate.

In July 2015, he went to Boston Children's Hospital for an extensive surgery to remove the remaining tumor, as well as his kidney.

Although a reactive Wilm's tumor is quite curable, the pathology from Noah's surgery showed that his tumor was non-reactive, which was horrifying for both the doctors as well as us. This meant more radiation than originally expected and a much more aggressive in-house chemo treatment.

Noah, our little super-hero, took all of this in stride. Through prayers and an extraordinary medical team, our little three year old's response was miraculous.
Our passion for research lies in the frightening realization that if Noah's cancer was to return nothing can be done. Our family would rely on new research and experimental treatments to save our precious child. At this time, we ask for friends and family, all of the Noah's Rainbow faithful ninjas, to join our team and financially support this cause. Together, with Noah, let's show our turtle power!

Thank you for supporting Noah and the more than 300,000 kids worldwide who will be diagnosed with cancer this year. By sharing the gifts of your time, talent and money with the St. Baldrick’s Foundation, you're supporting research to give all kids with cancer a better chance for a cure.