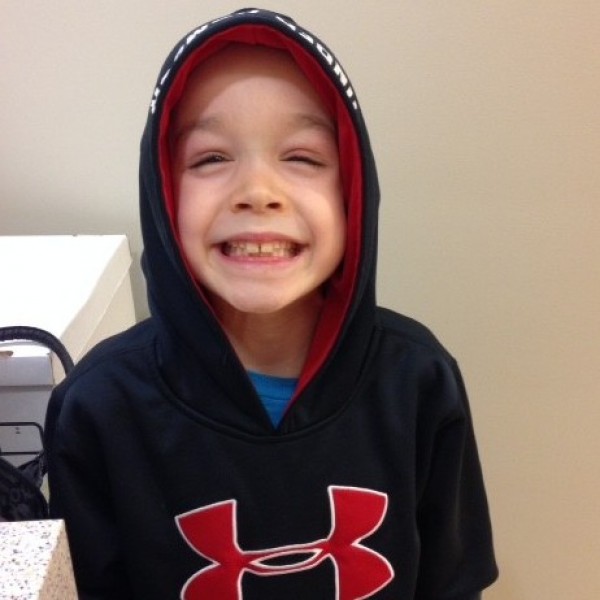 We have 4 children: Sarah, who is 11; Matthew, who is 8 1/2; Nathan, who is 7 years old; and Tabitha, who is 4 years old. Nathan was born on Dec 28, 2006. He began having seizures just before his 1st birthday on Dec 24, 2007. We have had multiple EEG's and a CT scan that were all normal. The doctors believed he had BPVC (a type of childhood migraine & vertigo disorder). In October 2008, his seizures began to happen more frequently. Where he used to have them once or twice every few months, he began having 10 - 15 a month. The Pediatric Neurologist sent us for a MRI on January 14, 2009. It was suppose to be very routine and they did not expect to find anything. However, just a few hours after his MRI we received the devastating call that Nathan had a tumor on his cerebellum that went over into the peduncle. We were sent to Duke on January 16, 2009 to see a Pediatric Neurosurgeon, Dr. Grant, who said we needed to set up surgery right away. On Tuesday, January 20, 2009, Nathan went into surgery to remove the brain tumor. Dr. Grant was able to remove a portion of the tumor but had to leave about 45% of the tumor. Pathology reports show that the tumor is a low-grade astrocytoma, both grade 2 (Brain Cancer). The tumor started to grow as of an MRI on 3/5/09. So Nathan had an InfusaPort placed in his chest on 3/11/09 and we started chemo on 3/12/09. The chemo is to try and keep the tumor stable for as long as possible. We are still praying for a miracle and that God will remove the tumor. Nathan was off of chemo from Aug 2010 until October 21, 2011 when an MRI revealed a 3 mm increase in growth on the brain as well as a tumor inside of the spinal cord (neuroglial tumor). He had surgery to remove most of the spinal cord tumor on 10/31/2011 and began chemo with Vinblastine on 11/14/2011 and Avastin on 12/14/2011. Both meds had to stop in Spring 2012 because his quality of life had declined. The cancer progressed again in Sept 2012. On 9/4/12 both the brain tumor and spinal cord tumor showed growth. Started chemo with Temodar and Etoposide 9/12/12 and started a third drug Revlimid Oct 2012. These are just to try and stabilize the tumors but will not get rid of the cancer. It is just to try and buy time. January 6, 2014 an MRI showed that the cancer is progressing. The brain tumor is enhancing with more active blood vessels and there appears to be a second lesion in the brain. On Jan 23, 2014 Nathan started off trial Everolimus daily. Due to complications on the medicine Nathan was take off on February 8th. A scan on February 20 showed that there is another tumor in the spine between T5-T6. We started a clinical trial of AZD6244 that Nathan takes twice daily since April 2014. While there are many things that cancer does, there are many things that cancer cannot do: Cancer is so limited Yet in all these things It cannot cripple love, it cannot alter hope We are more than conquerors through Him who loved us. It cannot corrode faith, it cannot destroy peace For I am persuaded that neither death nor life... It cannot kill friendship, it cannot suppress memories Nor principalities, nor powers, nor things present, nor things to come, nor height or depth It cannot silence courage, it cannot invade the soul Nor any created thing shall be able to separate us from the love of God, It cannot steal eternal life, it cannot conquer the spirit Which is in Christ Jesus our Lord. - Romans 8:37-39 written by: anonymous