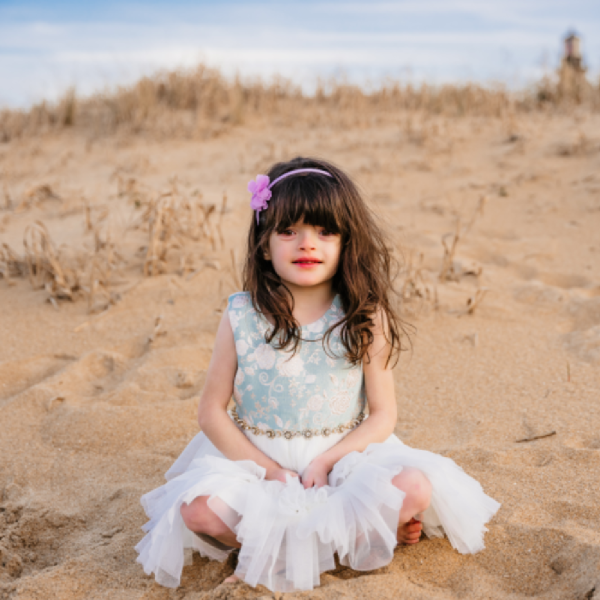 Cheyenne is no stranger to the hospital. Born at 36 weeks 3 lbs 14 oz., she entered the world fighting. In utero they found that the umbilical artery had a thrombosis. With an immediate admission and injections for me to help her lungs to develop she was born by an emergency C-section. Cheyenne only stayed in the NICU for 7 days thankfully! Before she was two Cheyenne was hospitalized three times for Reactive Airway Disease. After her third hospitalization they finally diagnosed her with Asthma. We moved to Illinois and Cheyenne had another episode taking us back to the hospital. A doctor at CHOW was concerned with her failure to thrive and ordered a bunch of test and a genetic test to be done. In 2018 we learned that Cheyenne had a rare genetic disorder called Noonan Like Syndrome with  variant in the CBL gene. This interpretation of Cheyenne’s variant is pathogenic meaning likely condition- causing. This lead to numerous appointments with different specialists to be evaluated for things that she could possibly have associated with this disorder. Cheyenne has a dilated aortic root that we monitor yearly and that is the only biggest concern we found. The Geneticist we spoke with didn’t have a lot of answers because this rarity with the mutation in the CBL gene isn’t widely known yet. We had her tested in 2019 for the juvenile myelomonocytic leukemia because individuals with this mutation are thought to be more likely to develop it. Thankfully it was negative! On March 8th I took Cheyenne to the hospital for what I thought was a stomach bug and dehydration because she had been vomiting the prior day and having hallucinations. She complained a little of her stomach hurting but nothing that concerned the doctors. It wasn’t until she had another hallucination that they decided to do an ultrasound of her belly. At that moment our lives changed. We were told that she had a very large tumor in her left Kidney. We were admitted to the hospital that night. The following day she had a CT scan. The results I was given was traumatic. I fell to my knees praying to God that he would be with her and my family as we navigated this. The next day she had a PET scan and to end the week a MRI. The results that were given originally had changed after the scans to Wilms Tumor. Still very hard to hear but a blessing that it wasn’t neuroblastoma. To be absolutely sure we came back the following week to have a MIBG scan. We found out at that time that her tumor had ruptured and it was considered a stage 3. A biopsy was performed that week as well as a port put in. The histology came back favorable Wilms tumor. We are still waiting for the LOH results. We are currently on week 4 of chemotherapy and Cheyenne is doing really good! She had a fever after surgery that took us back to the hospital and another time during her first week of chemo. Our baby girl is a fighter surprising us all each week. Our faith is strong in our Heavenly Father and we believe our Lord and Savior will deliver her from this all. We have an amazing support group and prayer warriors all over helping and praying for us. Thank you to you all! I found out about St. Baldrick’s from a leaflet in our binder we took home from the hospital. I immediately knew that I wanted to be apart of this organization to help in some way. After finding out that I could be a shavee in support of my sweet Cheyenne and help by raising money for this AMAZING Foundation I knew I had to do it! So please help me in supporting St. Baldrick’s! Thank you for supporting me and the more than 300,000 kids worldwide who will be diagnosed with cancer this year. By sharing the gifts of your time, talent and money with the St. Baldrick's Foundation, you're supporting research to give all kids with cancer a better chance for a cure.