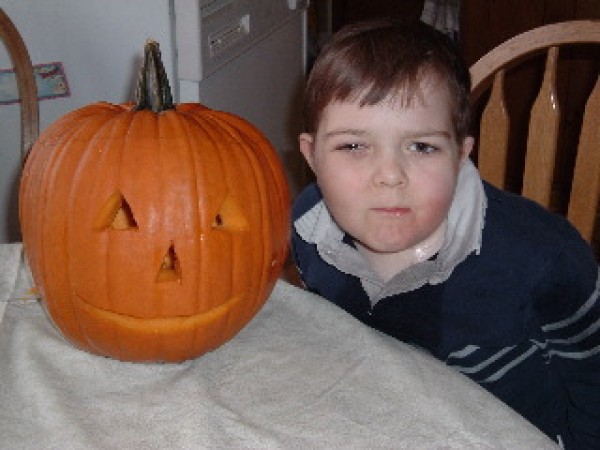 One remarkable thing about Ethan was that, even though he never knew a life that was free from cancer and its effects, he NEVER complained about his lot. Balance issues prevented him from being able to walk without a walker. A hyperactive gag reflex, caused by the tumor's location, made him dependent on tube feeding most of his life, and caused him to vomit an average of more than once a day for over nine years. Speech difficulties made it hard to understand him. Between treatment and tumors, Ethan's hearing diminished, so that at the time of his death, he had no hearing in one ear and very little hearing in his other. As his disease progressed and he started losing his hard-won physical abilities, Ethan adapted to his new limitations without complaint. Ethan had a great love of life, affection for all the people who shared it with him, and an excellent sense of humor. He worked hard to accomplish tasks that other children could do without thought and was so pleased and proud when he succeeded. He was a bright child who attended regular classes at school, in spite of his disabilities. He loved to play games. We carried a deck of Uno cards with us everywhere we went. Favorite activities also included singing along with Broadway musicals, riding his tricycle, reading and spending time with his extended family. Two months before he died, we took Ethan to the Relay for Life so that he could see the many friends who were walking in his honor. As I wheeled him around the track, he sadly said "I don't know why people are born if they're just going to get cancer." This courageous little boy knew that he was dying and that there was nothing that anyone could do to stop the progression of his disease. He most definitely did not want to die. Ethan benefited greatly from cancer research. If he had been born just ten years earlier, he probably wouldn't have lived to see his first birthday. We feel incredibly lucky to have had him in our lives for ten years, but we also feel that ten years wasn't nearly long enough. More research needs to be done to find the cure for this dreadful disease so that other kids can be spared the difficulties of the life he led, and so that other families are spared the grief that will be with us for the rest of our lives.