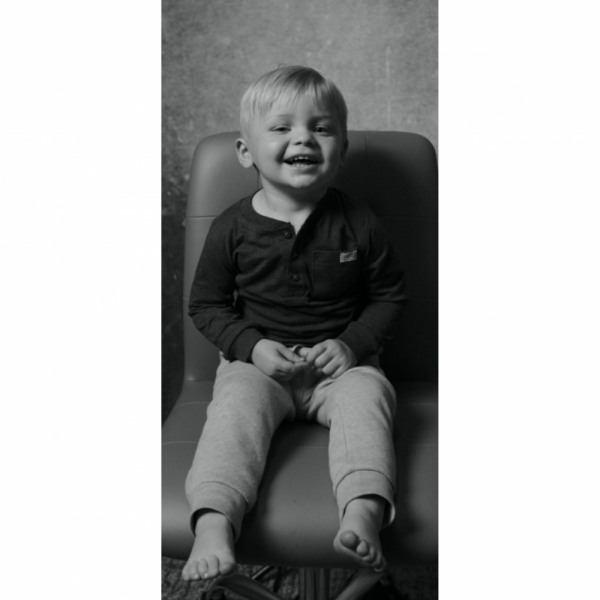 Thank you for helping in a cause we have grown to be so passionate about - raising funds for childhood cancer. Less than 4% of federal funding goes towards childhood cancer research. That number has to change in order to find new treatments and cures. Your time, money and support will help to change this statistic. Our son James was born on August 7, 2018. Six months later, James had what we believed to be a seizure and immediately took him to the ER. After numerous tests and scans, seizure activity was confirmed as was a mass found on the right side of his brain. He had immediate surgery and the biopsy of the mass confirmed to be a malignant brain tumor called anaplastic oligodendroglioma. It is extremely rare and even more rare in children - less than 2% of pediatric brain tumors. Due to his young age and successful surgery, his team recommended we “watch and wait” with routine scans every 3 months to monitor the tumor bed. He remained stable for 14 months until a routine scan in April 2020 showed tumor regrowth in the same area. He then had a second tumor resection surgery, and his team of doctors felt more treatment should be done since it grew back. They recommended proton radiation therapy which is only available in a few areas of the country, so we packed up and moved to Cincinnati last summer where he received treatment from Cincinnati Children’s Hospital. Once we returned home, he started an at home oral chemo that he is still on today and has been handling very well. Since returning from radiation, he has had a few unfortunate side effects, including a grand mal seizure and a stroke, which has caused ankle damage and weakness on his left side. But besides that, he is fighting hard and doing very well considering the circumstances. We remain hopeful that medicine will continue to progress and know that we will have options if his current treatment stops working. We’re insanely grateful to our team at Vanderbilt and to scientists and doctors who have helped us find the best course of action for James’ rare tumor. It is so incredibly unfair that any child has to endure what James has in his 2 years and 9 months of life. But he has taught us to keep putting one foot in front of the other and to remain positive and hopeful. These kids are true living, breathing superheroes and they deserve a happy and healthy life! Thank you for your support.